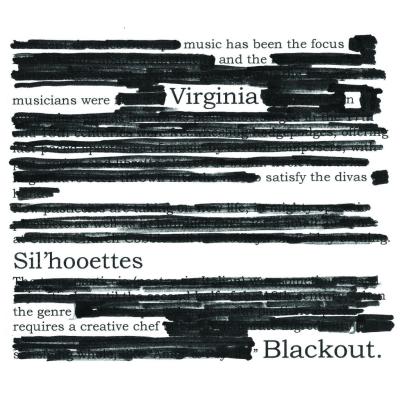 Maybe the Sils are open to accepting honorary members so we can all feel as cool as they sound. Once again, this powerhouse group of ladies has released a beautifully dense, plenty challenging, always emotional album with singing that feels as effortless as relaxing on a porch swing.

The wildly good soloists are still the biggest deal on the Sils' latest album. Since listeners usually connect with the lead first, it's a bonus that we have so much talent to hear and enjoy. If you like your singers richly smooth and velvety like a '50s jazz jewel, give Ola Iko a try on Cold Shoulder. Prefer a captivating enchantress who goes for the kill? You'll love Alicia Moreland on Bust Your Windows. Need a brazen fireball to power you through? Then Happiness Chijioke on Release Me is your gal. Looking for a gentle charmer? Kayce McGehee will fill that void on Mostly Me. But my personal favorite Sil soloist is Rachel Dady (Whisperer, Telephone) who has the kind of intense, unique voice that's hard to describe but impossible to forget. Such depth from leads really adds a lasting favorable impression to Blackout. Even if these songs start to sound dated down the road, they'll always be a great roster belting them out.

Producer James Gammon should share in the sense of accomplishment for Blackout. The extra attention to detail and flair he infuses into these tracks livens each arrangement and showcases the Sils in their best light. There's only one track that really stands out for its potential to be mutually improved between arranger and producer, and that's Cowboy Casanova. Between the redundant background and the overly souped-up bass (meant to add more interest, surely), Cowboy Casanova can't offer what the rest of more complex Blackout can, though it's not a bad listen. Conversely, my favorite arrangement under Gammon's care is Caitlin Morton's I See You, which is delightfully twisty and engaging.

The Sils are still the female group to contend with, and the one we a cappella fans can count on to impress and entertain us.

The Sils and I have an ongoing love affair that began with the excellent (if a little quirky) Sauce and continued with their much-improved sequel Take it to the Bridge. One of the songs from the latter album 1234 remains one of my favorite all-female tracks to this day; it's number 10 of my 25 favorite a cappella tracks of all time. I said of Take it to the Bridge "Now that they have begun to fine-tune their performances in the studio, I think the next step for the Sil'hooettes (and the one that will catapult them to greatness) is to labor a bit more on their arrangements to make each song a gem."

My love continues for this group, as Blackout is neither a step forward nor a step back. Rather, it is a step sideways showcasing some new, unconventional, and ultimately interesting material. The Sils have shied away from their previously more pop-centric repertoire into the land of indie and alternative, mostly to great effect. Are the arrangements better? Marginally, but this group definitely surprised me with improvements in other areas that I was not expecting. The result is another excellent album, and one that is difficult to compare to its predecessors.

One of my issues with Sauce that subsequently improved on Take it to the Bridge was the quality of soloists. This time, every singer knocks it out of the park. This was an improvement I wasn't expecting, but damn it was a pleasant surprise! Alicia Moreland kills Jazmine Sullivan's Bust Your Windows with a slow-burn performance that builds to a climax and doesn't let up. Gaby Wilson nails the key change of I See You. Happiness Chijioke turns in another fantastic, passionate vocal on Release Me. Lots of great stuff, song for song.

One issue with this album is that, while soloist energy is off the charts, the backs can't quite match it on some of the more intense material. Bust Your Windows is left a bit unsupported by the backgrounds. They just don't have the same level of intensity. This is not an uncommon problem in collegiate a cappella, but the Sils are an uncommon group, and this is something they need to get right to really deliver.

On the production front, the group's partnership with James Gammon continues to pay dividends. Gammon creates some epic soundscapes in the albums bookends, the driving Whisperer and electro-grooving Idioteque. Nothing on this album has quite the staying power of 1234 for me, but Idioteque comes close. Those drums are slick. I still feel like some of the mixes are compensating for gaps in the raw arrangements though, and I suspect an even better product might be possible if the source material were a bit more fully developed.

Bottom line: I still love the Sil'hooettes. I'm still waiting for them to deliver a classic album. Blackout, in its excellence, shows they're one step closer.

If Blackout makes anything clear, it is that the UVA Sil'hooettes are very good at making albums. They know how to use the studio to get what they want. Yet simply knowing how to use your tools is not enough; you also have to build something that captivates and excites. Each song on Blackout is technically flawless, but the album is far from perfect.

The overall sound is quite dense. The arrangements default to the standard collegiate wall of sound, with everyone singing all the time. James Gammon has done an excellent job on the production of these songs, but they all sound the same. I could easily imagine these songs being strung together into a seamless club mix, culminating with the one-two punch of Lady Gaga (the BOCA-selected Telephone) and a trippy take on Radiohead's Idioteque. Taken in small bites, one song at a time, this approach actually works quite well; in the context of an entire album, however, it becomes too much for my ears to take.

The energy is much lower than it should have been. The backs have been tuned, tweaked, distorted and filtered to within an inch of their lives. As a result, nearly all the energy has been sapped out. Cold Shoulder and Bust Your Windows have great leads in Ola Iko and Alicia Moreland, respectively. Those songs should have been dripping with soul and anger, but ultimately the monotonous drone of the backing block drags them down.

The songs that stand out are the ones that break this mold. Whisperer has the most energy and opens the album with a bang (and plenty of girl-power screaming). Happiness Chijioke squeezes every last drop of emotion out of the otherwise banal Release Me. But Caitlin Morton's arrangement of Rufus Wainwright's Beautiful Child is the track that I keep returning to again and again. With a wonderfully luscious variety of textures and sounds, it is the only song on this album that actually takes the listener someplace interesting. If the Sils can keep putting out more thoughtful arrangements like this and start relying less on studio effects to replace real emotion, those "4"s will become "5"s, and these women will be truly unstoppable.

To order this album, visit the group's website, A-cappella.com, acaTunes.com, or the iTunes store.