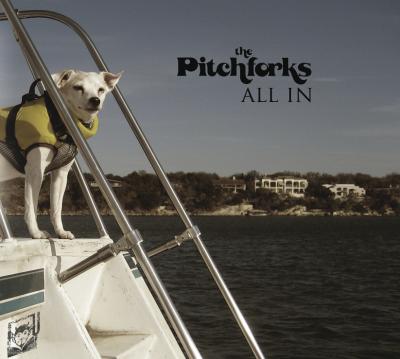 All In is a strong album for all of the reasons that the Pitchforks continue to be one of the top male groups in the country. KC Steedle and Evan Wisser provide some great arrangements for the guys to sing. The soloists are well suited to their songs, either for the comic bravado they bring to the performance (as with Nolan Henkle's Señorita) or a sexy swagger (Tosin Agbabiaka's Black and Gold). The production is bright and crisp and offers great studio tricks as pleasing enhancements and accents to the individual tracks. I love the fact that it's very natural sounding (except for when it isn't) and that these choices have been deliberately made. These guys are singers.

But something seems to be happening in the collegiate male a cappella world. I'm getting the sense that either groups have run out of new ideas, holistically, or they are simply content to rest on past laurels. I've seen it happen with Oxford's Out of the Blue, University of Richmond's The Octaves, somewhat with Cornell's Last Call, and even University of Oregon's On the Rocks.

And now, that trend continues with All In, the latest release from the Duke Pitchforks.

To quote my preview for Bring it Back:

"Now, while not sounding average by any means, that extra spark is missing. The community (especially in the collegiate arena with today's super-producers) has established a higher threshold of quality. What used to be innovative, is now commonplace for most groups that put out fairly well-received recordings. ... What I'm missing is that emotive force that pulls the listener in at the beginning and leaves you out completely depleted with the ringing of the last chord. In a word, emotion."

Whereas All In isn't as devoid of emotional spark as Bring it Back was, there are few truly memorable or remarkable moments on the album. And that's where the various groups begin to sell themselves short: not creating experiences with their songs that really make an "album" stand out, rather simply recording solid songs that are perfunctory in their ability to wow a listener.

Nothing on this album is bad. There are a few exceptional tunes like the original Calling Out and Black and Gold; a heartwarming sentimental gem, Downfall, that features a literal chorus of graduating seniors from the other a cappella groups on campus; and an epic (though with a tendency towards meandering) rendition of Agnus Dei. But unless you are forced to listen to the songs multiple times, you aren't going to remember why you enjoyed hearing them in the first place.

Most of the people who hear this album will enjoy it, as it's pleasant and pleasing a cappella ... but if a group is going to go all in, they really need to live up to the promise.

As a collection of tracks from one of the premier all-male ensembles in the country, All In is excellent. As an album, however, it leaves much to be desired.

Right out of the gate, the Pitchforks barrel through a trio of very different songs and styles, all well executed but none really setting the tone. Love is Gone, clocking in at a mere 1:50, feels like a tacked-on prologue, and its electro-pop/heavy metal styling never reappears. No More Running Away is a luscious mid-tempo track with excellent percussion, but its placement is off. It stands in jarring contrast with both Love is Gone and I Believe in a Thing Called Love, the latter a classic all-male, growly, testosterone-fueled sex monster of a song that is scary in its intensity.

I wish the album had started with Fireflies instead. The light staccato opening is wonderfully evocative of those titular bugs, and it only gets better from there. The dynamics are excellent, and each successive chorus swells just a bit more than the last. To me, this song is much more representative of the Pitchforks' style and sound than anything else on the album.

Viva la Vida, believe it or don't, is another winner. When you cover a song that has been done to death as this one has, you had better have something new and interesting to say, and this group definitely does. The Pitchforks seem to really understand the narrative of the song, and this understanding informs every aspect of the arrangement. Arranger Evan Wisser keeps the syllables simple, instead letting vocal textures do the heavy lifting. The bright synth piano in the intro creates a façade of optimism that is shattered by those thunderous timpanis in the chorus, easily the most thunderous I have ever heard, and those choral notes at the end are nicely foreshadowed in the second verse. Most importantly, KC Steedle kills the solo, nailing those high notes with no falsetto needed.

This is far from Mr. Steedle's only contribution, however. In addition to arranging most of the album, he also provides a wonderful original song in Calling Out. The arrangement ebbs and flows in a giddy, dream-like fashion, culminating in a decidedly creepy ending that plays with attack and adds unexpected gaps. The evocation of You're All I Need to Get By is another nice touch. Calling Out was conceived for a cappella, and it would be difficult to imagine it being performed any other way.

There are many other highlights, of course: the entire Duke a cappella class of 2010 making an appearance as the gospel choir on Downfall; the deliciously unexpected major 13th chord at the end of Let Me Love You; the entirety of Black and Gold. There are also some missteps, such as the audience participation section of Señorita, which probably plays great on stage but just sounds odd on a recorded album. But when you're as good as the Pitchforks, you can afford to take some risks. Buy this album for the songs you like, ignore the ones you don't, and be pleasantly surprised by everything else.

The Pitchforks are a group I've always enjoyed, having purchased both Bring it Back and Disconcert when they first came out. The group has a tendency to really "bring it", with a commitment to songs and arrangements that tends to blow me away, making the listening experience much more similar to that of a professional group. So it's time for me to review All In, and I must say the Pitchforks have outdone themselves. This is collegiate a cappella for overachievers, a musical treat that doesn't disappoint.

All In sure keeps the energy up. The first number, Love is Gone, explodes right out of the gate. I love the little vocal ticks that populate the background of Fireflies, a wonderful arrangement in its own right. I also love the laughter and celebration felt on Señorita and For Once in my Life. The intensity carries through to slower numbers as well: Rosé survives without vp, and the experimental soundscapes of Agnus Dei sustain interest.

Okay, let's pause for a moment and talk about Agnus Dei. It's a cover of the Rufus Wainwright song, which I never particularly cared for (despite being a huge Rufus Wainwright fan). The original always seemed self-indulgent, a musically lazy attempt to portray a painful topic through dissonance. But when the A Day in the Life-esque strings are replaced with vocals, the effect is chilling. The song feels somehow rawer, more visceral, and the eventual resolution is all the sweeter for it. This is the rare track that is significantly better than the original, and I must congratulate the Pitchforks on taking such a risk.

It seems almost unfair for me to review this album on its production, because it seems tailored to my preferences. Soloists are prominent in the mix, backgrounds are wonderfully clear, the reverb is tasteful, and effects/processing are used in exciting and interesting ways. On a side note, the vp samples here are often unbelievably good; I adore the wall of sound opening to No More Running Away, and the reverb-laden timpani and cymbal rolls on Viva la Vida are fantastic. The album sounds so wonderfully professional, I almost feel bad that other collegiate groups will be expected to match it. Hell, I feel bad that professional groups will be expected to match this. Kudos to Dave Sperandio for the incredible recording and mixing job on this album.

So now we come to the downsides. Soloists are good overall, but other than a few standouts (Nolan Henkle on Señorita, KC Steedle on his wonderful original Calling Out, and Will Sutherland on Fireflies), the soloists seem just ... passable. The passion, the fire, the intensity of the backgrounds doesn't always seem to translate into the solo performances. I don't mean that the singers sound like they're about to fall asleep in the sound booth or anything, it's just that the solos seem too cautious, too apprehensive. I'd love to hear some more ragged emotion, because I have the feeling these guys could really give heart-wrenching performances. The group is also considerably stronger in R&B/groove territory, with Señorita and Calling Out being two prime examples of the Pitchforks excelling in this area. Some of the rock songs (Love is Gone, I Believe in a Thing Called Love, and Downfall) don't really add that much to the overall album.

If you don't already own All In and need a nice pick-me-up, I can heartily recommend it. The Pitchforks, talented gentlemen all (I'll be watching what arrangers KC Steedle and Evan Wisser do in the future), have really produced an exemplary album here. It really was a pleasure to listen to it, and I'm sure I'll be listening to it for a while now.

To order this album, visit iTunes.