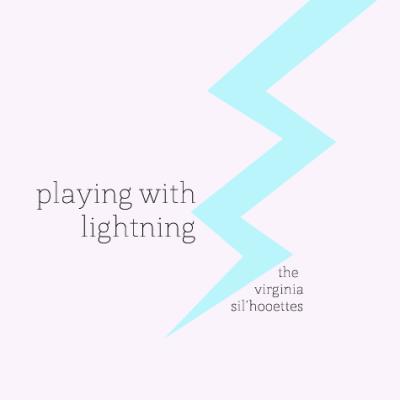 The ladies of the Sil'hooettes from the University of Virginia can perform a solo better than most collegiate women. This prowess is definitely on show with the group's latest recording, Playing With Lightning. Some of these ladies can just flat out "sang" with a captivating presence that is palpable. Yes, I'm mainly talking about you Happiness Chijioke, but I have my eyes (and ears) on Liz Smith, Grace Murphy, and Ola Iko as well.

Listening to soloists like Chijioke wail on songs like Mama and You Thought Wrong is worth the price of the entire album. She is phenomenal. But sometimes too much power can be a bit overwhelming and totally detract from a song.

Let It Be is only credited to one soloist, Alicia Moreland, and if this is the case, that is one set of disjointed timbres that she's putting out. It's distracting when Moreland's passaggio is so noticable because it's almost like two different people are singing the song, and their voices aren't very complementary. Her upper register gospel-belt overpowers (and goes sharp) in the more nuanced delivery of the beginning. When Moreland reins it in though, the music and performance is sublime, much like the performances of Starry Eyed and Around Us; both of these songs are near perfect as Rachel Dady and the team of Dady, Moira Lennon, and Erica Lester move mountains with whipsers on their respective songs.

Playing With Lightning is a richly textured album. The thrumming bass and powerful drums blast out at you with full force at a high volume. At a lower volume, the intricacies of the softer ballads play on the ear. But all is not as bright as can be as some of the arrangements are overly pedestrian with the altos and drums too focused on the downbeat. The arrangements make some of the songs like Machine Gun and I Wanna Go very choppy, (even though the bullet-like precision of the vp is awesome). Nothing is truly horrible, but sometimes the rhythm plods so heavily on the beat that all momentum stops as that 4/4 is pounded into our ears and brains. But that's a minor quibble on an otherwise excellent album.

In the end, I have to talk about James Gammon for a moment. I listen to a lot of female a cappella. And I listen to a lot of work by various a cappella producers (and the various jobs that that title assumes). Gammon has got to be the best at capturing the female sound and making it meaty, yet feminine at the same time. Granted, he's got a lot of talent at his disposal by working with the Sils — not to mention that some of the oompf is the result of mastering — but the basic genius belongs solely with him. Girls, get at him.

No quick pun to end this review. If you like collegiate a cappella, female a cappella, or a cappella music in general, you may end up loving this album as much as I do. Take a listen for yourself and see if you agree.

Each hair is perfectly coiffed on Playing With Lightning. And if there were any wrinkles after these gals left the studio, they've been steamed away. While flawless-sounding Playing With Lightning is an impressive achievement for both the Sils and the engineer/producer team working the vocals, this sonic ultra wax coupled with a smaller dynamic range than desirable makes it all fine, even great, but not everlasting or deeply affecting music on the whole. For my tastes, I preferred the musical variety and audible grit of yesteryear's Take it to the Bridge, but some fans will surely prefer this durable polish more. (To each their own.)

I'm pleased to report, again, that the leads for the Sils remain an absolute a cappella force. Good luck to anyone competing with this crew, especially Happiness Chijioke, who turns in her Sils swan song on Mama. Her work is a musical journey, one that keeps the listener enthralled to see what each new pass will bring. Powerful duets, which are quite rare in collegiate a cappella, are also featured on Playing With Lightning. How Chijioke and Liz Smith can come together so cohesively in super intense You Thought Wrong while still maintaining their individualism is a beautiful mystery. And Ola Iko and Grace Murphy sound like they were born to sing together on Up. All in all, the leads are quite ridiculous and hard to beat.

Some production choices from James Gammon distract a bit from otherwise solid arranging. The vocal percussion in particular is painfully artificially throughout (listen to the machine gun sound opening of I Wanna Go for a prime example), and just doesn't sound as captivating or graceful as the vocalists. Related to the processed vp are some crazy eyebrow-raising effects, but I rather like most of these, especially the celestial/star twinkling sounds of Starry Eyed, and the futuristic sounds that make Around Us (arranged by Gammon) seem like a soundtrack for an out-there space film. This is way, way cool. So, hits and misses in sound production.

On Playing with Lighting, we hear some some really interesting engineering (Starry Eyed, Around Us), deep ranks of impressive soloists, a dash of fun poopsy-cutesies (Hotel Song), some dancy-pantsies (I Wanna Go), a splash of near-goth (Howl), and just general really respectable music, but none of the songs seem as contagious and permanent as some on Sils releases gone by. Still, ain't no one gonna mess with these strong performers, no way.

Don't judge an album by its cover. The Virginia Sil'hooettes' album Playing With Lightning might look like a relic of 1980s graphic design, but it sounds fresh, modern, and energetic.

These ladies really know how to sing and arrange — six out of the album's eleven tracks were arranged by music director Liz Smith (class of 2012), and she really knows how to work with her group's voices to fit the original songs. Starry Eyed is a lush, layered arrangement that beautifully captures the energy of the song, while Howl is more understatedly intricate, creating a moody intensity that's absolutely entrancing. And while we're on the subject of Liz Smith, she's also a powerhouse soloist — her take on Sara Bareilles' Machine Gun is fantastic. (I was initially disappointed that this wasn't a cover of the Portishead song by the same name, but I quickly fell in love with the Sils' performance here.)

And hey, while we're talking about soloists, I really shouldn't single out Smith, because every soloist here is well-suited to her song. The only exception is Up, whose first soloist (presumably Ola Iko) feels like she's singing way too low in her range. But the one-two punch of Happiness Chijioke and Liz Smith on You Thought Wrong is powerful, especially when they sing in harmony on the choruses. Sophie Dougadir does a great job on Crawl, and Alicia Moreland totally delivers a stunning, goosebump-inducing version of Let It Be (another fantastic arrangement by Liz Smith).

The production (courtesy of James Gammon and Liz Smith) sounds polished and professional but is a little bit overdone — especially the percussion. Drums are particularly overprocessed on the tracks I Wanna Go and Around Us (a shimmering Jonsi cover that's otherwise gorgeous; the percussion detracts at times). All-female groups can often struggle with percussion, and the Sils have taken it a little too far on a few songs here — it's the one annoyance on an otherwise beautifully-delivered album.

To order this album, visit the group's website, CD Baby, or the iTunes store.