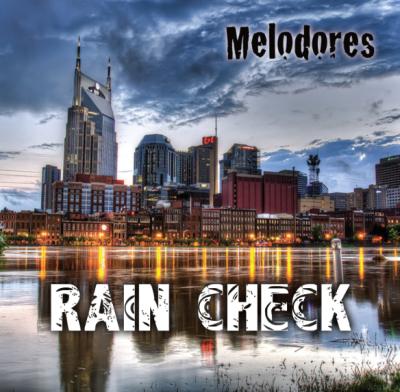 We've all come to an understanding that most collegiate a cappella albums are a huge mixed bag of material. Even so, Rain Check is certainly in the running for the most random this-and-that on any album and perhaps most in need of a haircut to get rid of scragglies and cowlicks. Yet, it's also one of the more entertaining collegiate albums I've listened to. If there's one thing the Melodores keep consistent and always bring with two guns blazing, it's a funky sound mixed with high-octane energy. Whether or not you want to listen to their full-length album, though, is a harder sell.

A cappella enthusiasts who expect top-notch, well-crafted production will have trouble with the very uneven approach to Rain Check. Three tracks are live, which, as you know, always stands out on studio albums. Then there's this crazy "tag" transition ("Mel-ohhhhh-dores!") that happens at regular intervals, like a radio station announcing its call letters with a special identifying studio jingle; it's unnecessary, but I suppose not annoying. Then there's the bit in the liner notes about not using "synthesized, sampled, or otherwise sequenced elements", which is both a hallelujah and a what-what in one (the sound is, as I've stated, uneven; some of you won't be able to tolerate the throw-back vocal percussion). Finally, the length of some of these tracks — a nearly nine-minute JT medley? a thirty-second intro to a song (Let's Get It On) that needs no intro? — needs another looksy so we don't repeat such things on subsequent albums. It takes both stamina and control to let Rain Check just roll along on your player without growing restless. And that shouldn't be. The music can be broad, but the focus must be tight.

Somehow, through all this, the entertainment value stays sky-high. The Temptations, Muse, Journey, Eric Whitacre (!), The Killers, a Muslim piece (Zikr, which is crazy good). A vocal trumpet, a very impressive natural vocal guitar (Don't Stop Believing), good spoken word parts, endless testosterone. Plus, a story about how this album was shaped by the Nashville flood of 2010. Really, just very entertaining. If only the whole package was cleaner, crisper...

I'll be listening to Rain Check for awhile, as it's fun, and let me tell you, sometimes that's truly enough. But I'll hope for something with more editing and precision the next time around.

"All over the place" is the best way to sum up the Vanderbilt Melodores' Rain Check. Individually, there are some good things going on here, but it's so jumbled and scatterbrained that the album as a whole is a hot mess. Imagine that you put your entire mp3 library on shuffle, and you get an acoustic folk song followed by some brutal death metal followed by a jazz number. Sure, you might like each of those songs individually, but the three in sequence make for disjointed listening, and that's the experience I got when listening to Rain Check.

The Melodores take on some standard contemporary pop, but they also throw in an Indian piece (Zikr), a choral piece (Sleep), a bunch of barbershop tags, some muddled live tracks, and two medleys. I'm a fan of diversity, but this is enough to make your ears spin.

Still — and I want to keep emphasizing this — some of the individual tracks here are lovely. Papa Was a Rolling Stone has a great energy and build; Supermassive Black Hole rumbles with tension (I do wish for a little more dynamic range here); and the beautiful Sleep is gorgeously executed (but sounds really out of place compared to the rest of the album).

Unfortunately, those individual good moments can't outweigh the disjointed ones. One barbershop tag might've been cool, but four — interspersed at random points — just feel like too much. Zikr just doesn't fit in with anything else here, and the difference in recording (and tuning) quality on the live tracks makes it difficult to listen to these in the middle of all the studio recordings. Add to all of that a song with a major tempo issue (Whatcha Say is excruciatingly slow) and a nearly nine-minute(!) medley (Cry Me a Medley), and you've got a group that's living out the "jack-of-all-trades" axiom. The Melodores do have moments of excellence here, but they're lost in an album that's incoherent overall.

Rain Check is an interesting outing from the Vanderbilt Melodores. These talented gentlemen are taking some risks with song choice, album programming and group sound. The inclusion of a straight-up choral piece, Sleep by Eric Whitacre, is something that hasn't been seen on the majority of collegiate a cappella groups in the last ten years or so. The smattering of live tracks, likewise, is something that has fallen out of favor on contemporary recordings.

However, I think the gambit is mostly successful. In a sub-genre that is becoming increasingly hyper-produced pop, rock and R&B/dance oriented, the Melodores' callbacks seem charming, even refreshing. Pop, rock and R&B are also well represented here, though I wish that the Melodores had been a little more discerning with some of their song choices; inconsequential covers of All These Things That I've Done and Supermassive Black Hole slip by without attracting too much interest. The live tracks, always a potential landmine, are well recorded and show the group's talent without detracting too much from the overall album.

The Melodores have a clean group sound, favoring individual voices over huge blocks of sound. Soloists are for the most part good, but generally some of the higher solos (particularly those sung in falsetto) seemed ill-defined and shaky. The bass sound is also a consistent drawback, with weaker low-end definition being compensated with a large boost in the volume. VP isn't exceptional, but it usually avoids being spitty and helps with propulsive grooves.

Rain Check is a very likeable album, and it's clear to me that a lot of thought and effort went into making the Melodores stand out as artists in a crowded collegiate field. Their next step should be going even further in this direction: nailing down a coherent, cohesive group sound and vision that's heard throughout the entire album.

This album is available on iTunes. Hard copies may be purchased from the group in person.