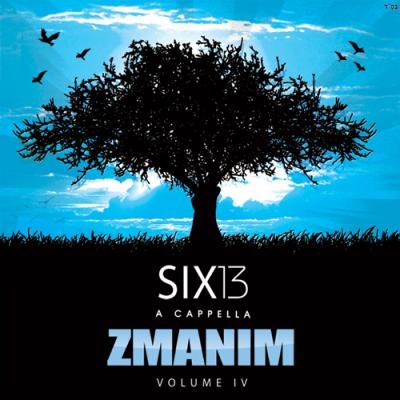 Six13 has always delivered full, throaty Jewish rock with a heavy dose of electronic timbres. Zmanim ranges from heartfelt, to boy-bandish, to Weird Al-style parody, to grandma-approved schmaltz and back again. There's no denying the creativity and talent involved, both behind the mike and behind the board, but it's a confusing listen that often trades the immediate for the authentic. Though the individual tracks are often quite good — even excellent — in a vacuum, the album as a whole feels unsettlingly schizophrenic.

As always, executive producer Mike Boxer delivers powerful original music (Tov Lehodot, Kol Han'shama, Hinei Mah Tov) and endless cleverness in his parody lyrics (P-A-S-S-O-V-E-R, I Light It). Combine this with the other members' excellent contributions and Zmanim easily rates as an extremely creative release, particularly in a world populated by imitative a cappella cover tunes.

Six13's comprehensive liner notes, complete with translations, are a pleasure to read and a compelling reason to grab the physical product and not just the digital version of Zmanim. This release is also noteworthy for featuring independent Jewish artists like Yitzy Spinner, 8th Day, and child soloist Shmuly Brafman, a particularly unusual and open-minded choice in a cappella music.

There isn't much in the way of dynamics or phrasing, and there aren't too many shockingly unexpected moments. But there are loads of rich chords, driving beats and soaring tenors, and for many fans that will carry the day.

With a myriad of styles, half a dozen a cappella engineer/producers, six Six13 members and three alumni, and the guest artists performing, Jewish a cappella enthusiasts won't find a singular artistic vision, but they will find much to enjoy on the creative and well-sung Zmanim.

One would think that after six years of reviewing Six13 albums that I would get over my reluctance and apprehension at describing them as a party band. And yet that trepidation remains, and the fact that they do record some of the most danceable music in the pop idiom makes it all the more difficult. But such is the case with the fourth album in their discography, Zmanim. Many of the tracks are simple groove machines that can make the staunchest prude shake his or her moneymaker with abandon (albeit not wild abandon, but abandon nonetheless).

Right from the beginning, the guys set an infectious rhythm that infuses into the spirit as well as the body. The original track Tov Lehodot jumps and boogies right out of the speakers. It's catchy, possessing a joyousness and light that transcends the comprehension of the listener — you live it.

And while it is a great album, not everything is as golden as it has been in previous releases by the group. Co-RARBer Kimmie Raschka Sailor asked the question in her review of Yesh Chadash: "Will Six13 ever hit its peak?". After several years of upward mobility, sometimes you just have to begin to coast and rest on your laurels every once in a while.

My small beef here is that there isn't a lot of new ground being explored by the group or challenges that they haven't already surpassed. It's pretty rote to know that the opening track is going to be energetically amazing. That there will be a few clunkers that seem to get lost in translation. That the hip-hop/pop mash-ups, in this case P-A-S-S-O-V-E-R and I Light It, are going to be hilariously brilliant. And, even though I'm sure he's sick of me writing about him, that Mike Boxer is going to deliver a face-melting solo on a song like Kol Han'shama — some profound original that he's penned.

As a result, the tracks here have left me a little underwhelmed with the entire disc. I'm not as overly awed or moved with the selection this time as I have been in the past. And some of the emotional connection just doesn't reach beyond the superficial. For me, there are no commanding and captivating songs like Home, Gadlu, D'ror Yikra or Im Eshkachech that grab you and wrench out every ebullient tear imaginable.

Everything can't be perfect.

And the sparkling electricity of past albums — that bright and shiny quality we mention so often in reviews — is actually detrimental in this instance. The nasality that I've begun to associate with certain styles of Jewish music is in abundance here and is only amplified by the bright and buzzy (almost electronic) nature of the production values.

Be that as it may, Zmanim is a great album to add to any collection of diverse a cappella music. You can't really go wrong with working this recording of pop-tastic music into your listening queue, whether you are Jew or gentile.

It's a difficult conclusion to reach, since Six13 is such a wonderful group to have in our a cappella community, but Zmanim is just not as startlingly good as previous releases by Six13. The soloists are pretty awesome, the energy is bitchin', but the music is not as unique, not as poignantly emotionally focused, not as "have you heard this yet?" as days of yore. This ain't traditional worship music, but it's no longer a novelty, either.

I think one of biggest opportunities a small group such as Six13 has is understanding the huge liberties the musicians can take in their arrangements and performances. Owning the Jewish niche (and Six13 definitely still owns it) no longer seems like enough. We enjoy your schtick (P-A-S-S-O-V-E-R, and the even more humorous I Light It), but we've heard this from you guys before. Love the originals, especially snappy Tov Lehodot, a stronger offering than the plodding Kol Han'shama, which needs a slight kick in the tempo pants. But Tov Lehodot is not one I need in my rotation. What's missing in Zmanim is vocal and production experimentation, the role of the group as a cappella innovators and educators who use their instruments in unexpected, compelling, maybe even bizarre ways. Because if Zmanim were sung entirely in English, I think the result would be astoundingly commonplace music with occasionally moving and/or entertaining lyrics. That's not the greatest place to be in, and I don't like pondering it; Six13 is just too talented to be commonplace. Now I'm not suggesting a slick rock 'em vocal band like Six13 should toss its identity aside to add in some chattering chickens, but I think there's plenty of room to peck around before these guys enter the chicken coop. As it stands, there are hardly any dynamics on Zmanim.

Though I certainly hope that if Six13 takes a drive down Experimental Avenue it keeps its professionalism (who makes liner notes this artful and complete?) and passion, two areas which remain spot-on and should carry the group nicely to continued successes.

This album is available at CD Baby, at Sameach Music, on iTunes, at Judaica stores nationwide and wherever Jewish music is sold.