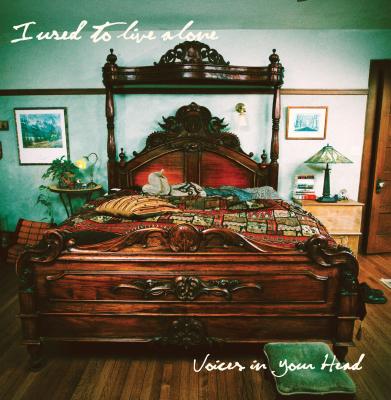 Voices in Your Head doesn't yet command a national audience, but with I Used to Live Alone the mixed ensemble from the University of Chicago has become one of the fastest rising stars in collegiate a cappella.

Blessed with a few absolutely stunning soloists (Elspeth Michaels being the brightest of these jewels, especially when delivering her own beautifully penned lyrics over Chris Rishel's moving music in Boomerang), and the arranging chops to make songs into creative musical journeys, Voices also had the good sense to work with Grammy-winning a cappella studio wizard, Bill Hare. With Bill's hand at the board, Voices strikes a balance between naturalism and studio effects that lives in that most elusive sweet spot.

I Used to Live Alone boasts two impressive originals, but the arranging displays such invention that even covers feel original. On the topic of originals, Voices must be taken to task for failing to give the original composers of its covers the credit it gives to its own writers. Instead the group makes the all too common mistake of merely crediting original performers.

If anything holds the group's scores back, it's the occasional mismatch between a soloist's talents and the demands of their solo. But in the age of the playlist, that shouldn't stop anyone from purchasing this album. Any college group that finds itself simply imitating covers will have its world opened up with a few listens to Voices' relentless creativity. The final product may not be perfection, but what the group is aiming for can truly be said to be its own. That's considerably more than most groups — even those with higher scores — can say.

I Used to Live Alone is an album that swings for the fences with its artistry. From the sleek concept of the jacket art, to the thoughtful execution of its original material, there is no question that we're being treated to something with vision — something that aspires to connect with an audience in a meaningful way. That attempt at artistry is thankfully on the rise in our community, but still fledgling at the college level. The group's sound doesn't always rise to the loftiness of its goals, and the set list feels a bit like it's pulling in two distinct directions, but I still have to give Voices in Your Head major props for turning in some really well thought out, and generally well executed material.

Let's start with the overall tone of the album, which I think shows potential to be a massive strength in the future. Album mastermind Chris Rishel proves he has a flair for harmonic development by contributing chord changes to two original tunes (I'm excluding Hallelujah, Pt. 2 from the analysis, since it plays more as an extension of Hallelujah than an original piece on its own), both of which pleasantly defy expectation. At the same time, they present a bit of an obstacle to the cohesiveness of the album, sitting as they must next to more traditional pop constructs. The lyrics add to the gap, choosing unpredictable cadence and balance over more conventional pop pairings. Taken as a whole the album makes you wonder: Does Voices in Your Head want to be aggressive, current sounding pop/rockers, or cerebral singer- songwriters?

Given the quality of the originals, which, whether or not you appreciate their penchant for metaphor are undeniably well written, I think that Voices could have a really strong direction to follow in the future. I don't necessarily buy them as rabble-rousers (Resistance) or party rockers (Let It Rock), but I do think that I Used to Live Alone speaks strongly for the group as alt/pop songsmiths. A college group that consistently releases original material that warrants critical analysis? Yes, please. Could Voices be that group, or did we just get lucky this time with Rishel at the helm? Only time will tell.

The evidence suggests that the bench may be deeper. I'd Like To is one of my favorite college tracks of the year, largely on the strength of Elspeth Michaels' solo, but also due to a groovy performance from the group. That kind of quality doesn't happen without talent, so if the conceptual end of things can continue to stay strong, this group has a very bright future on record.

I Used to Live Alone is a supremely professional effort from Voices in Your Head, a talented and ambitious collegiate group from the University of Chicago. When I received this package in the mail, with its indie-rock album cover and a card advertising digital downloads for "instrumental" tracks (perhaps a first in a cappella history?), I was blown away. The cover design (conceptualized by group member Sarah El Moutassim Bih, with photography by Manny du Mont, and graphic design by Anne Glista) is absolutely fantastic. It's probably the best art design on an a cappella CD I've ever seen (collegiate or otherwise). This is a good thing — as a cappella continues to sidle its way into the mainstream, I suspect album art design will continue to take higher and higher priority.

And it's not just the album art that exudes an air of professionalism! The album is polished, with Voices in Your Head exhibiting the most consistent group sound I've heard in a collegiate a cappella group since the Tufts Beelzebubs on Code Red. This is probably helped along by the remarkable contributions of a certain Chris Rishel. Mr. Rishel has arranged, recorded, and produced (along with strong mixing and mastering work from the always-reliable Bill Hare) every song on the album. He's a talented fellow who writes the music of the two original songs on the album (each showcasing twisted and quirky progressions that would seem at home on a Harry Nilsson or Sufjan Stevens album), and also provides some memorable vocal solos.

I could dissect the arrangements at length (and I'd love to, they're fascinating and a few steps above standard college fare), but it's simpler to provide a quick overview. The arrangements make use of the entire vocal range, from stratospheric sopranos to subwoofer-rumbling basses, with mostly strong results. The soaring soprano lines in Home remind me of The Swingle Singers, if for no other reason than they're pretty damn good. In fact, the upper parts have more fun in these arrangements; the baritones and tenors are mostly relegated to rhythmic "dum"s and "dah"s. Though stuffed with plenty of harmonic and rhythmic goodies to keep music nerds like me occupied, the arrangements often veer into becoming overloaded and too busy. The best moments are often the simplest: when Boomerang calms down after its cascading choruses of "doh"s and "dah"s turn into a block of perfectly tuned "ooh"s, it is sublime.

I Used to Live Alone has few major missteps, but sometimes the group stumbles. Voices in Your Head is significantly stronger when the song doesn't require a pounding beat for propulsion — club-style numbers like Let It Rock and So What seem curiously lifeless. Overdone aca-standards like Hallelujah and Resistance get enough of a facelift to provide cursory interest, but they're nowhere near as strong as the breathtaking highs of I'd Like To or Home. The most troubled song on the album, in my opinion, is the cover of Ingrid Michaelson's Porcelain Fists. The number features a beautiful, heart-wrenching solo by Naomi Gorfinkle; it's unfortunate that she's accompanied for the first part of the song by goofy collegiate backgrounds, though the pizzicato strings that appear midway through the song are well done. As for Rishel's synth-strings sound ... well, I guess I've never heard anything like that in contemporary a cappella before.

Voices in Your Head has produced an album of high quality, and the few absolutely stunning moments on the album alone make it worthy of your purchase. The group sings beautifully, and Rishel's contributions to the album cannot be understated. A cappella is gradually becoming cooler and cooler, and it appears that Voices in Your Head is at the forefront of this movement. I Used to Live Alone isn't perfect by any means, but it's an enjoyable and focused addition to a collegiate a cappella canon that's getting better by the day.