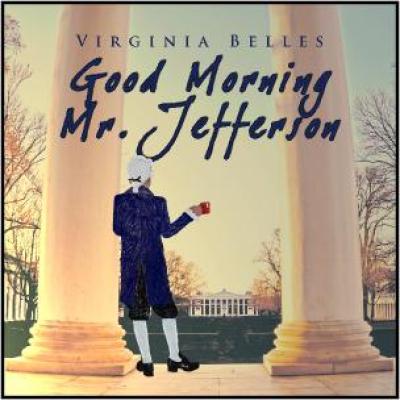 Endearing but not boundary-pushing, Good Morning, Mr. Jefferson is an acceptable all-female album. This music sounds like it's cut from vellum paper: light but sturdy, with a very pretty, nearly angelic finish. In an atmosphere of heavy collegiate producing, it's nice to hear some softness around the edges, to hear youthful clarity. Yet the arrangements are largely just alright (but an overall improvement from acaBELLEa), and the block is doing fine but not exceptionally well. All of the soloists are passable, but few are memorable. And the work as a whole is certainly not brimming with awesome energy. So there we have it: an acceptable all-female album.

In my opinion, Good Morning, Mr. Jefferson really begins with track four, Love, Save the Empty. The arrangement is interesting, the song itself is interesting (a rare combination), and the full splashy chorus that just keeps getting better is an addicting delight. The next track to roll, You Lost Me, is the most spectacular music you'll hear on the album. Soloist Molly Millard's voice has a haunting quality that will seep into your dreams, and her painfully told story is richly musical. And Dog Days are Over is just a solid listen. Usually weaker tracks are buried in the middle of an album, but the Belles reverse this trend.

Despite the weaker album intro, the section of Good Morning, Mr. Jefferson that is the most dangerous is the duo Killing Me Softly and Bye Bye. Long and dull, Killing Me Softly could have used some further arrangement editing to keep the momentum going. Conversely, Bye Bye is so sugary sweet that I don't think dentists could recommend it, either. Yes, it has its charm, and sure, it's a cutesy country number, but it's still borderline listenable.

So while certain sections of Good Morning, Mr. Jefferson don't provide much to get excited about, the album does end strongly. Happy is confident and well-led by capable soloist Caitlin Alexander; a track that you'll probably return to many times. Lastly, James Gammon increases call-to-arms anthem Marching On with a nice production boost, which creates a fine closer for these ladies.

Next up for the Belles: consistently good tracks.

First things first: although I only rated this album a '3' overall, let's call it a "high 3" ... just not quite high enough to round up to a '4'. Good Morning, Mr. Jefferson has many good things going on, and in many respects is better than average and correspondingly might deserve a better-than-average rating. However, I also have a major complaint with it, detailed below, which is why in the end I rated it a '3'.

The Virginia Belles are an all-female group from the University of Virginia. Judging from photos on the group's website, at any given time the Belles have approximately twelve-sixteen singers. From what I can hear on the album, the distribution of parts is fairly standard fare for all-female groups and goes approximately like this: a "bass" (likely octavized), a pair of "tenors" and a pair of altos singing mid-range harmonies, a soloist typically from the high alto/low soprano ranks, and perhaps four sopranos singing the high harmonies. Also, one or two singers on vocal percussion duties. That doesn't quite add up to twelve-sixteen, but you get the idea.

The overall sound on the album is quite good. The singers all have nice voices, sing on key, blend together well, and with the exception of the vocal percussion which sounds quite processed, their voices sound natural and unforced. In these respects this album is a nice step up from the group's previous effort, acaBELLEa, which I also had the privilege of reviewing. acaBELLEa was much more hit-or-miss in many respects. I also like a couple of places in these songs where it sounds like the group adds real claps to the standard vp effects.

My main complaint about the album is probably best illustrated in the classic song Killing Me Softly. The Belles' version comes closer to the Fugees' cover than Roberta Flack's. However, it doesn't have the soul (emotion, passion, what have you) of either of those two. The vp beat that goes throughout almost the whole song doesn't add energy, but rather sucks it away by preventing the soloist from deviating an iota from the pre-programmed 38.5 beats per minute. (I timed it.) What we are left with is a song that sounds nice, but which I'm ready to be done with a minute or two before it actually gets over. There's no real expression from the soloist, no interesting arrangement tricks, or anything like that to keep my interest. And there's the rub: the album is boring at times. Special moments are too few and far between.

In general I feel that the soloists could and should be brought out more; backup vocals often cover them up. Most of the soloists are just average, but there are three worth mentioning specifically: Molly Millard on You Lost Me, a rare exception to my "not enough emotion" complaint; Kara Oyhenart on Shark in the Water, who has a nice quick vibrato at the end of her sustained notes; and Caitlin Alexander on Happy, who fairly effortlessly navigates from a low G-sharp (G#3) at the start of the piece to a high B (B5) at the end.

If you're a fan of the group, or of all-female a cappella in general, I don't think this album will disappoint. As long as you are not expecting it to be at the pinnacle of collegiate a cappella, I think you'll join me in giving it a thumbs up.

The Virginia Belles definitely have a well-defined repertoire: the group seems to do mostly recent pop songs, mostly by female artists. That clear niche (plus the glossy sound and solid tuning) goes a long way towards making Good Morning, Mr. Jefferson a cohesive and pleasant album.

What makes the album a frustrating listen is that there's really no warmth to it. Sure, it sounds good, but the soloists — with no exceptions — sound as if they're singing words and notes, not lyrics and feelings. Bye Bye is a kiss-off song, and yet the Belles' version sounds full of sweetness. On Happy, you just crave for the soloist to wail on the dramatic lines ("So what if it hurts me? So what if I break down?"). There's no urgency or desperation in Need You Now, and hearing that detachment song after song makes me want to shout, "FEEL THE LYRICS, DAMMIT!"

That disconnection isn't just in the soloists, either. There's a handclap rhythm on King of Anything that sounds sampled; its precision may be "perfect", but it also quickly becomes annoying. It seems as though the Belles have edited out any human aspect of their recording, and what's left behind might be technically perfect, but it just sounds sterile and emotionless.

There are a few other issues with Good Morning, Mr. Jefferson. The soloists are mixed too low, so they're lost in these busy arrangements (Dog Days are Over is a prime example). The arrangements are literal, to a fault. The vocal distortion bridge on Bulletproof is transcribed here. (Let's face it: it's filler in La Roux's original, and it sounds weak and unnecessary here, too.)

I want more from the Belles: more emotion, more creative arrangements, more dynamics, and most importantly, more warmth. The Belles clearly know what kinds of songs they want to sing, and they know how to make themselves sound good in a recording. Unfortunately for them, that technical stuff is the easy part: now they must learn how to feel the music.

To order this album, visit the group's website or the iTunes Store.