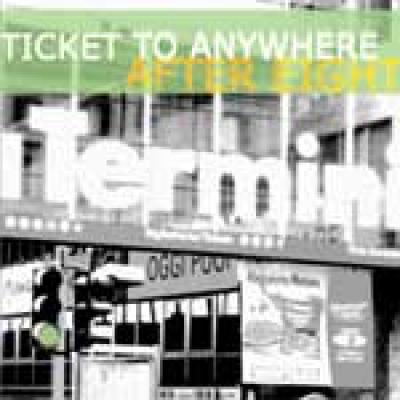 After Eight is an official subset of the audition-only Cornell University Chorus. Ladies who join the chorus are then eligible to audition for After Eight. A side benefit of this first round of auditions is that all the members of After Eight are good singers. There were no weak individuals to contribute false notes (Other groups protest: "But she was the best voice of our auditioning crop of 2006!") or shaky solos (Other groups protest: "But she is a senior and never had a solo on an album before.").

They also have the benefit of strong voices ranging from the tip top to the very bottom, and that can be rare. Back in the day when I was in a women's a cappella group, we were always on the lookout for "Barry Whites", that is, ladies who could strongly sing in the lower range. Barrys are not easy to find, and based on this recording, at least, After Eight has their fair share. Luisa (who contributes three solid solos with Hold My Hand, Fast Car and Ready For Love) was probably their prize Barry before she graduated. Her rich voice has a deep resonance and warm tone no matter where in her range she is singing.

I enjoyed many of the soloist's interpretations of their songs. I liked Grace's light and girly take on 24, and after hearing Sade's sultry belting on hidden track Everybody's Free, it is clear that her voice is unfortunately wasted on You Oughta Know.

While all vocally solid, some of the tracks sound like the energy was thrust upon them in production rather than present in the unadorned tracks (i.e. Hear Me, Let Go). On song selection, After Eight dipped into the obvious pool, so we have versions of Fix You and Over My Head (Cable Car).

While I enjoyed many aspects of the production, I would have preferred a cleaner sound overall. With the reverb, delay, and other effects on various vocal parts, the final product is a bit messy.

After Eight is an auditioned subset of the Cornell University Chorus. Their release Ticket To Anywhere is neither a compelling nor unpleasant listen, landing After Eight in the middle ranks of female a cappella groups.

The crux of After Eight is the soloists. Both on the lead and when they're in the background, many of the After Eight ladies sound too sugary sweet for the material. This sound is acceptable on softer numbers like Breathe (2AM), but it's hard to pull off the bigness of Fix You, Let Go, or Over My Head (Cable Car) without a front woman who can hit it out of the park. One area that stuck out for lack of prowess is the 'Yah Hey' section of Let Go, which should sound more emotive and not like a response from a resident of Upper Michigan ('cause there's beauty in the breakdown, yah hey?). Another area is the forced approach from the soloist on You Oughta Know, who tries to channel Alanis with an unnatural-sounding result. Conversely, the alto supreme solo work from Luisa Traumann, a gal born to cover Tracy Chapman, is excellent. Sara Twerdok also succeeds on Hear Me. Once After Eight can deliver more consistent solos, they'll be ready to propel to the next level.

There are some nice special touches from engineer James Cannon on After Eight. Especially enjoyable is the cool opener to Boys of Summer, and the entire treatment on edgy, driving Hear Me. The production does falter in a few areas, though. More magic should have happened on the end of Fix You, where a minute ticks by without anything to keep the listener's interest (2:26 — 3:21). Since the arrangement is pretty empty there, perhaps a shortened bridge and a cut right to the "tears stream" section would have been more appropriate. Likewise, something more needs to happen through the undercurrent of repeated syllables on Over My Head (Cable Car). But overall, James Cannon's style works well for After Eight.

With more powerful leads and more oomph from the background, After Eight should fare well on their next release.

Top-notch production delivered by some of the leading a cappella sound engineers? Check.

Anna Nalick's Breathe (2AM), Coldplay's Fix You, and The Fray's Over My Head (Cable Car)? Check.

Wait. This isn't a mixed group?! The girls involved with Ticket To Anywhere could have fooled me. In fact, they did. They fooled me well into the fifth track when I unveiled the group photos. After Eight has chosen to use an octavized alto line throughout their recording. It's a technique that adds an extra level of depth to their sound, but possibly limits their creativity as arrangers of an SSAA-type group. It's clear from this choice and their track list that they were aiming for an aggressive sound that most closely mimics the originals they're covering, and I believe they achieved it. I sincerely hope they have access to these same production values in their live performance because these girls can wail. The student body at Cornell deserves the opportunity to hear After Eight as they have envisioned themselves on Ticket To Anywhere.

Track to track, voice to voice, cover to cover, this album sounds and looks great. James Cannon has produced a wall of sound that can stare down almost any female group in the country (three tracks were mixed by Tat Tong). One slight chink in the armor may be a span of two to three seconds between 24 and Hear Me when an uncomfortable end to the former meets the opening of the latter. Both tracks have an eerie shimmer that would seem to overlap beautifully if left as a seamless transition, much like the technique Panic! at the Disco uses throughout their A Fever You Can't Sweat Out. The noticeable clip is jarring and breaks the mood. Hidden track Everbody's Free might have been aided by a trip to a local church to take advantage of a natural acoustical setting rather than artificially creating it in the studio. The nuance of chords and entrances overlapping within a natural environment is something which would have raised this track from good to great.

Boys of Summer blows my hair back and whispers sweet nothings into my ear like my first girlfriend at the local roller rink in fifth grade. I love everything about this track. From the taboo guitar solos in the opening to the tom-heavy driving percussion, this track has all the bells and whistles. The bridge even pans back and forth, aggressively passing the inner voices back and forth across the speakers. Rachel Miller adds an extra level of playfulness to Don Henley's trademark sound without losing one ounce of believability. But as much as I enjoyed that first couples skate at the rink, it was over quickly, leaving me with nothing more than a happy memory. That's also the case with Ticket To Anywhere as there isn't much to write home about after the first track. I encountered temporary flings with 24's Grace Ha (evoking a Jewel-like quality to her voice), as well as Luisa Traumann's campaign to run Tracy Chapman off the face of the earth with her lush delivery of Fast Car. Finally, I'm not quite sure why female groups continue to cover Breathe (2AM) as I've not heard a rendition that moves beyond the realm of boring.

As much as this album sounds great and succeeds from a technical glance, it fails at producing music that moves the listener. Most arrangements are greatly transcriptive in nature and rarely attempt to stray from the original artists's recording. If After Eight can create more memorable arrangements, they will move mountains with their next recording.