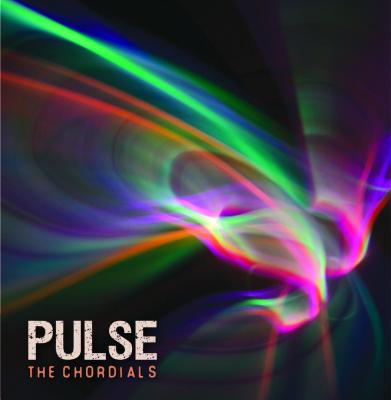 The reason behind a given collegiate a cappella album title is one of the greatest unsolved mysteries of the world. Okay, maybe not the greatest, but geez, they can often be baffling.

In the case of the Cornell Chordials' latest CD, Pulse — a word whose definitions include "the rhythmic recurrence of strokes, vibrations, or undulations" — it is quite apropos and presents no puzzlement whatsoever.

What's fascinating then, for followers of The Chordials succession of sometimes fantastic, sometimes just solidly good CDs in recent years, is that the titular pulse is provided less by the heavily processed, sequenced, looped and otherwise assembled backgrounds that the group has favored of late. Instead, it comes from the extremely (and arguably on the collegiate level, quite unusual) percussive arranging style of the group's music director Carolyn Rogers, who has a solo or shared arranging credit on eight of the album's eleven songs.

"Wall of sound" wouldn't really be quite right, but to the extent that it refers to a great many percussive syllables fashioned into multiple rhythmic lines which are layered one on top of the other to eliminate the space and/or need for the more traditional, foundational block chords, Rogers' style could reasonably be described as a "wire fence of sound". There is a lot more space to breathe between the parts but with some exceptions, she seems to actively shun an establishing harmonic chord at the center of her arrangements, preferring instead to use a collection of rhythm-based lines with the hope that when taken together, they serve the same purpose.

The results are always interesting, if not always successful. When Rogers commits fully to the concept and carries it through the full arrangement, like in Sincerely, Jane, it's immensely enjoyable. When she abandons the concept and goes for a very straightforward, traditional approach, as in a very milquetoast Rolling in the Deep and a somewhat more complex but still too conventional The Other Side, you can't help but wonder why. A few songs fall somewhere in the middle: What's a Girl Gotta Do is a bit of a one-trick-pony arrangement. It's a nifty trick elevated by the palpable sass of its soloist, Ariel Arbisser. It's not unlike Touch, which vacillates between the funk groove of Sincerely, Jane in the verses and the Adele power chords in the chorus, but whose schizophrenia is saved by the CARA-nominated solo of Billy Ferguson.

If there is one notable demerit to be registered it's in the production, which is not bad, per se, but certainly features a fair number of odd choices. Listen to Papa Was a Rolling Stone, combining the best of Rogers' sparse, percussive instincts with a robust sound that's as "wet" as you'll hear on this album, and you can't help but wonder why nearly everything else is mixed so dry, so thin and stark, with almost a metallic sterility to it. Listen to the thumping kick drum on any number of tracks and then explain in Sweet Disposition why finding the kick drum — the very pulse of the opening track — is such a struggle. On a much more micro level, why is the sound used in place of a snare towards the end of Touch placed so far forward in the mix to the point of distraction and annoyance? These and other similar issues are all the more infuriating because there is also some very accomplished sampling and processing work peppered throughout (the transition between verse and chorus in The Other Side comes to mind). So clearly, Steven Goldman of Four Legs Records is by no means a novice in the studio.

Where does that leave you as a consumer? Well, this isn't the Chordials best work but it's better than a fair amount of what's out there. Perhaps even more importantly, it's different and more interesting than so much of the cookie-cutter pap that so many college groups are turning out these days. So on that point alone, I'd urge you to check out Pulse.

Pulse is brilliant. There have been few a cappella albums that have moved me so much on a visceral level from top to bottom; Pulse is one of these albums. And few artists have been able to captivate my mind as much as they have my heart: Sweet Honey in the Rock, The Nylons, Duwende, The Beelzebubs, Extempo, Basix and The Loreleis come to mind quickly. I would be remiss if I didn't add The Chordials from Cornell University to this list.

The album just works and the a cappella community is all the better for it. Pulse is a master class in infusing emotion into every moment of a performance and being able to replicate it onto a recording. I would say Pulse is a near-perfect blend of sound production and music mastery.

However, the album is not going to be to everybody's taste. It's full of slow jams and twisty-turny songs that will catch you completely off guard (most notably the latin-samba-infused beginning of Smile for the Paparazzi before diving into the hard rock choruses), so if you aren't able to get dirty and lustful at the drop of a dime, or a rugged mellow tone isn't your forte ... you won't fully appreciate all the beauty that The Chordials have digitized. And that's a shame. This album should have won the CARA for Best Mixed Collegiate Recording. I'd go on record saying that Pulse was the best pop album of 2011.

I didn't look at my past reviews to verify this, but I feel very secure in making the statement that I've rarely if ever given a "5" in the soloist category. I was hard pressed not to do it here, so congratulations folks, you've broken my streak. I mean, it shouldn't be possible to have a group that has the talents of Kellie Haselkamp, Ariel Arbisser, Carolyn Rogers, and Billy Ferguson at its disposal. Simply ridiculous. I could write pages about the virtuosity each of these talented performers possess. Each has an arsenal full of vocal pyrotechnics that commands attention.

Haselkamp's ease at encasing the listener in liquid sound is evident by the fact that she solos on both of the more atmospheric tracks, which happen to open (Sweet Disposition) and close (Cosmic Love) Pulse. Top honors, anyone?

Ferguson brings the tenor testosterone to the audio palette. I got a chance to chill and talk to Jonny Lang several years ago during his meteoric rise in the blue-eyed blues world. That man is sex on a stick. Ferguson's take on the sublime Touch is every bit as erotically intoxicating as the original. And what makes Ferguson so good is that he can flip the script so quickly on you that you don't recognize his wailing on Smile for the Paparazzi until you look at the liner notes and exclaim that it can't be the same person. Damn!

If you don't know the name Ariel Arbisser, then learn it. As I have stated elsewhere, she is the ghost princess of the fiercest. Bow before, be blessed. Yes, she's that good. From her previous gem Ramalama (Bang Bang) off of Sing 7: Lucky to Pulse's What's a Girl Gotta Do, that's some talent that you want to bask in all the time.

And while overall the track isn't as strong as some of the others on the disc, Papa Was a Rolling Stone features Rogers, Arbisser, Ferguson, and Nathan Bull putting it down like their lives depend on it.

Carolyn Rogers is not only a great soloist as you can feel on Sincerely, Jane, but she's also an accomplished arranger. She penned eight of the eleven tracks on the album including three of my favorite arrangements: The Other Side, Papa Was a Rolling Stone, and Cosmic Love. The incorporation of Wicked Game as counterpoint and underscoring to The Other Side is essential in a non-obtrusive way. She's made this arrangement into one of those tracks that is so intrinsically intertwined that you can't imagine the original song without the inclusion of the other.

But fantastic soloists and great arrangements aren't the only things working for this album. They are the icing on the cake. The real bread and butter of Pulse are the background vocals, the precise percussion, and the attention to musical detail from every member of the group on the album. The chords don't just lock, they Alcatraz your ass. The bari-basses boom, beckon and beat you to a pulp. The sopranos slip and slide the scales like Grey Goose® down a luge. All the while the two sections that gel the whole thing together, the tenors and altos, face-melt you with their subtle strength and superb sexiness.

Put on your oven mitts, because it doesn't get any hotter than this. Pulse is the best collegiate album I've reviewed in years. Sounding like a real album, an actual related collection, Pulse is a steamy, fireworks-in-the-sky release neatly tied together with insane rowdiness and funk.

What's clear here, is that the perfectionist Chordials were confidentially polished and ready to rip before going into the studio, and that has made all the difference. The group's militant musical precision and panache is on full display in every track on Pulse, but there are some must-hear moments that place The Chordials soundly on their own stage. I feel like Papa Was a Rolling Stone is the kind of implausibly incredible track that only comes around once in a great while for collegiate or professional groups. The driving intensity underneath the whole show is enhanced with clever arranging that ensures "papa" comes across as "pa-pa!"; subtle, but brilliant. Things don't get sultrier than the unified vixen sound from the females that the arrangement keeps coming back to — between the characters telling their stories about papa's past and town hearsay — until the whole thing explodes like an Icelandic volcano. Love it, need it, a stylistic masterpiece, so glad I've heard it, so help me. Speaking of "pa-pa!", listen to the way the Chordials absolutely shred an otherwise cheesy/fluffy/throw-away song like Smile for the Paparazzi. I think they should try a Miley Cyrus or Justin Bieber number just for kicks. Another fine moment: the over-the-top but still controlled "who who who" action continually pushing What's a Girl Gotta Do to crazier and crazier heights. Rhythmic interest gets high marks on this album.

If there's one unified theme here, it's that each song is driving ever forward, constantly layering and dazzling until the very end. Let the listener get bored? Not a chance. A great deal of this praise must be directed toward Steven J. Goldman of Four Legs Records; may he brag about Pulse as much as the group should, especially about the intricate production on Cosmic Love. But really, the album is one of those rare complete packages. The arrangements are amazing. The soloists are all confident and capable (some a little less so, but no one is a dud). The group manages to tightly blend despite having flashy individual voices. Flair is rampant, but never too much. The vocal percussion is stellar, but never overshadowing. I have but the tiniest of quibbles, which all boil down to personal preference (like specific phrasing and breaths in the lead lines; who cares?). Pulse is just awesome, period.

I'm already anxious for the Chordials' next release, but I'm happy to soak in this one for a long while...

Purchase your copy of Pulse at CD Baby, the iTunes Store, a-cappella.com, or www.chordials.com.