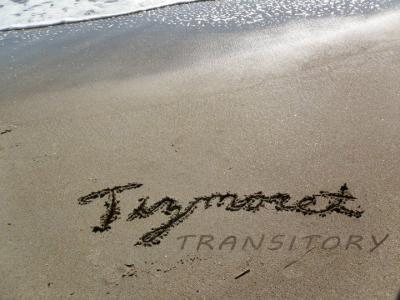 Tizmoret is part of a subset of contemporary a cappella called Jewish A Cappella. This group is, in fact, the winner of the first annual National Jewish A Cappella Competition, held in 2011. Classic Jewish melodies, American pop music, and contemporary Israeli tunes form the core of Tizmoret's repertoire, but fully half of Transitory features songs you'll recognize in arrangements that largely keep the feel of the original intact. How do these pop rock standards mesh with the Hebrew songs? Surprisingly well. That's because the Hebrew material is either originally pop rock itself or arranged that way. So despite the range of source material, Tizmoret creates a consistent sound on Transitory.

Solid arranging by Tizmoret's core arranging team plus reliable production and studio work by Mike Boxer and studio work by Alex Green and Alex Koutzoukis show off the voices of Tizmoret nicely. The back-ups are treated with generous and creative effects while most leads stay clear and present.

There are, however, a few moments when pitch correction leaves somewhat distracting pitch or tone artifacts. One rarely hears any of this in the backgrounds, but a few leads are exposed enough that the sounds will raise an eyebrow for attentive listeners (for example, on Always on Your Side, Refa'aynu, Mimkomo).

As is common in collegiate groups, women's leads often display greater maturity of tone and phrasing. But as a part of the whole, the guys do hold their own, adding a gentle fullness to the sound. Still, in the end, it's the textured, gritty female leads (King of Anything, Soulmate) that this listener gravitated to over the more youthful sound of the gentlemen.

Vocal percussion duties are traded frequently, but the album keeps a very consistent feel nonetheless, which is a testament either to the performers' consistency, or more likely, to the treatment each received in the studio.

The liner notes fall terribly short. Instead of crediting the composers, Tizmoret credits "music by" followed by the artist or band that Tizmoret recognizes as making the song famous. The result is a hot mess and is a red flag to publishers that rights may have been mishandled. The phrase "music by" should not refer to the original performing artist, as Tizmoret lists. On Bless the Broken Road, for example, they should have used "by", "written by", "music and lyrics by", or even "composed by" Marcus Hummon, Bobby Boyd, and Jeff Hanna. Why these names? Because they wrote the music and lyrics. They, and not Rascal Flatts, are the ones that Tizmoret must credit and pay.

On the plus side, Tizmoret does credit the arrangers, soloists, and vocal percussionists. When the composers are group members, they are also credited by name.

Liner notes aside, Tizmoret has much to be proud of with the release of Transitory. And, despite the name, this is a release they'll be proud of for many years to come.

The unavoidable nature of collegiate a cappella may indeed be Transitory, as Tizmoret suggests, but it's nice to to report on the continued progress of a group that defies the yearly challenges presented by graduation.

To be fair, Transitory is two steps forward and one step back for Tizmoret. The group has once again teamed with the go-to Jewish aca-producer Mike Boxer (with some help from the gents of Plaid Productions), so once again, we're treated to a well-tuned, slick sounding album. Transitory has even better vp sampling than Sounds in My Head (gone is the ever-present sibilance), with loops and other technological assistance used to excellent effect.

Daniel Henkin, the group's professional director since its inception over fifteen years ago, remains at the helm. So once again, we're assured of musically sounding, well-voiced arrangements performed by a well-rehearsed ensemble that does well with phrasing, breathing, and dynamics.

The big step forward — at least in the album's best moments — is the continued move away from the homophonized sound that the group has tended toward in the past. Slowly but surely, with each new release, Tizmoret gives us more and more layered, textured arrangements with multiple, syllabled rhythms and less obvious "pad" chords, with vp, bass, and leads all adding up to something interesting and entertaining. Where such intricacy was the exception on Sounds in My Head, here fully half the album is more satisfyingly "arranged", with the CARA Runner-up (Best Religious Song) Emtzah Halailah being probably the group's best recorded work to date. Also to its credit, even on some of the more chorally-arranged material, there is a level of harmonic creativity and variation in such tracks as Im Eshkachech, so what could have been a mind-numbingly repetitive A-B-A-B structure remains absorbing throughout.

Inherent in the praise above, though, is some criticism as well. There are still some "filler" tracks on this album — Bless the Broken Road and Refa'aynu — which deliver already simple songs in a rather milquetoast style. The group has evolved past such elementary, unchallenging work and would do well to avoid such feel-good/throwback material in the future. Also, in searching for richer background textures, Tizmoret's arrangers need to keep in mind that background syllables are individual colors that need to be blended smoothly and painted with judiciously to achieve maximum effect. A few times too often — Soulmate and Always on Your Side to name two — we hear a background syllable pattern so exposed that it becomes distracting. "Badoom-k'tow-tow-Badoom-m'now'm'now" (or some approximation thereof) is a perfectly reasonable rhythmic line, but entirely on its own for too long, it sounds a little ridiculous.

Once a group that was sweet and charming but lacked the real chops and sophistication of a first-rate contemporary a cappella ensemble, Tizmoret can certainly now consider itself at the forefront of collegiate Jewish a cappella — especially after winning the inaugural Kol HaOlam competition (the National Collegiate Jewish A Cappella competition) in 2011 and successfully defending the title in 2012. Indeed, based on Transitory, the group could even be reasonably considered on par with a fair number of the good (if not great) scholastic groups around the country. I can only hope that Tizmoret doesn't stop here and remains committed to further improvement so that we can speak of this group not merely as makers of wonderful Jewish a cappella, but as creators of terrific a cappella period.

I listen to Tizmoret's track Heaven from Sounds in My Head just about weekly, and years have passed since I received that album. My prayer for another slice of Heaven wasn't answered with Transitory, which unfortunately makes no forward progress for Tizmoret.

The group continues its familiar approach of singing a mix of Hebrew and English songs. Honestly, I think this is getting too expected for this group, rather like a blueprint, because the divide in quality remains: album after album, the Hebrew songs are performed with more focused intensity and thus offer more audible interest than the English ones. Maybe it's time for this group to take a risk and go fully Hebrew for an album. Obviously these singers must love Six13 if Mike Boxer continues to produce Tizmoret's albums, and there ain't no one who can rock Jewish a cappella like Six13. So if that's the inspiration, then cross the line and make it official. They can always whip out the Fireflies action for campus concerts. (And this from the reviewer who still listens to Heaven! I'm just respecting and encouraging the aspect with the most potential, and for Tizmoret, it's the Hebrew repertoire. So to reconcile all of this, perhaps the last track/one track could be in English.)

The detail-oriented listener will have a tough time with Transitory. Lots of harsh, clumsy syllables and word patterns clutter up this album (Always on Your Side is the hardest to accept). The energy is nearly drowsy throughout. And what in the world happened with Bless the Broken Road? It's one of the most lyrically charged country ballads out there, capable of making a spittin', tacklin' football player weep, but here it sounds like a weird little ditty sung in the shower. There are many aspects to improve here, though the group has made one marked improvement for Transitory: the album art and product presentation doesn't look like it came from a dorm room for this release.

Basically, it's time for Tizmoret to amp up, narrow in with laser precision, and rock some crazy Jewish a cappella.