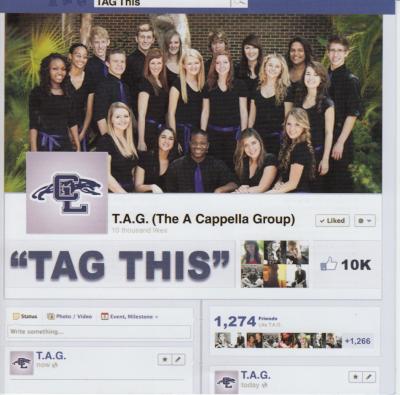 Cypress Lake High School Center for the Arts in Ft. Myers, Florida, has a lot to be proud of. T.A.G. (The A Cappella Group) blows the roof off preconceived expectations with its latest, TAG This. Easily better than many award-winning collegiate groups, T.A.G. delivers emotional soloists, indefatigable energy, smart arrangements (several by Tom Anderson), and elegant production by Liquid 5th. One day, the high schoolers who sang their hearts out on TAG This will be in college, and then real life where they will experience both the victories and indignities that come. And perhaps, in the midst of all that, they will look back on this album and begin to appreciate what an incredible achievement it truly is.

On paper, the challenges of this project should have resulted in several embarrassing failures. Putting rap on a cappella albums (Stereo Hearts, Fly) is usually a recipe for groans and eye rolls. T.A.G. gets it right with fun, energetic vocals and gritty, deep-pocketed rapping from both genders. Christian Fernandez (Stereo Hearts), in particular, sounds ready for radio.

A Change Is Gonna Come presents similarly daunting challenges. Without a soloist of impressive vocal stature, the song guarantees nothing if not a listener's disappointed headshake. Though the backs and arrangement are admittedly a little square, Quinton Thomas's rifftastic soul more than caries the day. Likewise, the heartache of In Your Arms should have been too much for Megan Bowen to conjure. It isn't. Quirky and touching, Megan's is a voice we long to hear many more stories from.

Things aren't all rosy though. Listeners may cock their heads at the strange syllables and wince at the distracting, studio-created dynamics on For the First Time, which is a shame, as Josiah Vega does a stellar job with the teen-angsty lead. The studio's mixing efforts surely stem from an awareness that the performed dynamics are lacking. This plagues the entire album, with Kaleidoscope Heart probably being hurt the most by their scarcity. While many of the original versions of the songs were also recorded with little dynamic range, vocal groups must nonetheless infuse their renditions with greater contrast. Dynamics are at the core of what makes vocal groups great.

Also not so rosy are the liner notes which fail to credit any of the composers. Seeing any release that disrespects composers is a disappointment. When that oversight occurs on an academic release, it's worse. This is no example to set for young singers. At the holiday concert, the concert choir does not perform The Hallelujah Chorus as performed by the Boston Symphony Chorus. That's nonsense. They perform The Hallelujah Chorus from The Messiah by George Frideric Handel. While that omission is the most glaring, a review of best practices would help both online corrections and future releases in many ways. But in fairness, this credit is one of funnier I've read in a while: "Absolutely no instruments were used in the making of this recording, however, a few sopranos were injured recreating the cuica on Brighter Than the Sun."

In the high school universe, TAG This is straight "5"s. For the aca-world at large, it's still impressive. It's hard to imagine anyone that wouldn't enjoy the best of these tracks. High school directors in particular are urged to pick this up for both enjoyment and reference. May albums like this become the new normal in high school a cappella.

High school a cappella is advancing faster than any other category of a cappella, and TAG This is a fine example of this success. When I graduated high school, I left with a scratchy-sounding disc of standards like Bridge Over Troubled Water and River in Judea recorded in an auditorium. I can't even imagine having TAG This as my keepsake. Goodness...

Brighter Than the Sun epitomizes all that's well and right about modern high school a cappella and is a wonderful opener. It's just so darn refreshing and happy. Most of the song choices on TAG This seem really solid for this group, as evidenced by the genuine emotional connection you can hear from the singers. Occasionally the relationship content presented through the lyrics seems a touch mature, but it's safer than a lot of radio tunes, so I won't be prudish for the sake of the beautiful content within.

Arrangers for TAG This come from the outside, with some big names attached (Tom Anderson, Shawn Pearce). Some scores really work, and some could use more heft or realigning for this particular group of singers, but in nearly every case, any weak point in the arrangement (like the plodding straight-forwardness of A Change Is Gonna Come) is compensated for by strong soloists. My favorite piece is Stereo Hearts which features instantly compelling backs, fabulous sound enhancements, and a legit rap by Christian Fernandez to make for an addicting track.

Leading the fierce soloist parade with a vocal baton made of fire is Emily Alvarado. She could certainly use Uncharted to audition for a professional group. And on the aforementioned A Change Is Gonna Come, what an old soul The A Cappella Group has in Quinton Thomas — what a bluesy, soul-singin', riffin' fool! Love it. Also, the tight melody/harmony work on Towers is at once delicate and commanding; kudos to the leads for intertwining their voices so captivatingly.

The blend throughout TAG This is decent, but the balance strongly tips more toward showcasing the gals. However, this isn't surprising in the least, because there are a lot more females than males in this group. This is not super uncommon for high school, but does it affect the overall sound of the recording in a significant, treble-heavy way? Absolutely. But one bonus: we get a female vocal percussionist (Aurora Mitchell), drumming for all of TAG This, and that's uncommonly cool.

Additionally, for next time, T.A.G.: please also list the required original songwriters/composers in the liners for your product and not simply "Originally Performed By" (especially important in an educational setting).

All in all, TAG This is a good release made by passionate young artists.

It's fitting that TAG This opens with a cover of Brighter Than the Sun, because that's not a bad description of the album itself. Liberal use of higher registers, chirpy soloists, and general "in your face" production choices makes this one a bright and shiny auditory experience. Luckily for the listener, this brightness translates into being appropriately bouncy rather than being grating and excessive, and with this The A Cappella Group has got itself a group sound.

I've been privileged enough to be able to follow The A Cappella Group's progress to this point, and I can safely say that this is their strongest effort to date, which is really saying something. TAG This is an exemplary high school album, which in turn functions as a good and solid contemporary a cappella release.

The question is: why does T.A.G. succeed where so many of its older peers fail? How does TAG This get that shining "4" rating from me while so many passable collegiate releases get "3"s and lower? One simple word: commitment. These high schoolers sound engaged, connected, and raring to go, no matter the song or solo. There isn't a single uninterested or disjointed lead here; every soloist on the album sells their solo as if they're a pro. The tonal and pitch quality of the individual singers vary, but their dedication to what they're singing doesn't — and that's something that no amount of studio magic can change.

T.A.G. should feel very accomplished with this release: it really showcases the maturity that's becoming more and more standard in high school releases. As high school groups adapt to collegiate arranging, producing, and soloing trends, it's going to become more and more difficult to differentiate high school and collegiate groups; TAG This is at the vanguard of this new future.

In addition to CD Baby and iTunes, this album is available by contacting garyrs@leeschools.net.