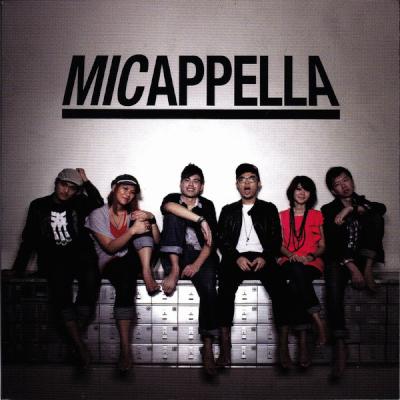 MICappella is a small mixed group from Singapore that is making a huge impact on the Asian a cappella scene. And MICappella is a really refreshing EP that'll take you to Happy Land, with familar American mixers (Hare, Boyer, Feldman, Tong, and Sperandio) adding a big, big sonic boost.

Short but sweet, what leaves the biggest impression on MICappella is all the attention to rhythm. Sometimes vocal percussion is squarely in the background of a cappella albums, merely there to keep time, but here it's the star of the show with such variance, volume, and hot beats that it nearly sounds like Club MICappella. We're just missing a DJ. I really like this approach, especially for an EP that needs to leave a mark, and most especially on creative Ready, Go (awesome job, Tat).

The vocals are tight and vibrant. The arrangements underneath the vocals occasionally slip into too-repetitive-sounding (San Chang De Yong Bao), but the score is in the backseat to the sheer plethora of sounds happening here. Is that a whistle or a space ship landing to open up Ready, Go? Was that a twinkly magic wand waving around in Ai Le? There are lots of little treats for careful listeners on MICappella.

This group definitely shows its stronger side on the first two upbeat tracks that have so much more flash, but the necessary emotional commitment is certainly present for the slower tracks that follow, and that's half the battle with downtempo pieces. This is a clean, exciting little EP that should sit well on any a cappella ears.

MICappella ends its liner notes with a simple declaration: "LET'S ROCK OUT!!" This album does a lot of things well, but I have to say the one thing it absolutely does not do is "rock". There's a lot of crooning; some fantastic, sweeping, beautiful vocals; and some very tasteful percussion throughout. Yet it's all very contained, very safe, and over the course of this full EP, a little boring.

Now, lest I come off too harsh, this album is certainly a step up from MICappella's previous release. By recruiting the "Justice League of A Cappella" as they are referred to in the liner notes (namely Ed Boyer, Bill Hare, Freddie Feldman, Tat Tong, and Dave Sperandio), the group has doubtless set themselves up for success. Each track sounds polished and clean in a way that only the best know how to deliver. Tat Tong in particular elevates Ready, Go by crafting some deliciously non-organic and radio-ready textures that make this track the standout of the album. All of this is good news for the continued evolution of the group.

The trouble now comes in the form of singing that's just a little too perfect at times, and a track list that seems to be at odds with this group's stated desire to ROCK! There are only two real "uptempo" tracks on this album (in quotes because, truthfully, they're really more mid-tempo). Both are thinly arranged and sung with only just enough gusto to be credible. It actually makes for a pretty weak opening and closing to the album, which dampens the overall experience.

Where MICappella shines is on its slower ballad material. Here the minimal arranging style and chill vocals do a much better job of servicing the mood. The result is some pretty fantastic music making. Again, Ready, Go is the standout. The pre-chorus pads (:49) just sit so perfectly in the mix, and the tone is spot on. It's a wonderful sound. Nothing else here is quite as epic, but really the group seems to hit its stride on ballad and R&B-flavored material.

This EP is a solid step up from the group's previous efforts, and it hints at even bigger things to come. As an album it's difficult to recommend, simply because it's not very exciting, and it doesn't commit firmly or often enough to the things it does really well.  Bottom line: more tracks like Ready, Go, please!

A young, mixed a cappella group featuring more men than women sings pop tunes with a shiny gloss and a spark of enthusiasm. Sound familiar? How about if they work with Deke Sharon while competing in a television competition show called The Sing Off? Ok, so maybe MICappella didn't win The Sing-Off China (they were runners-up) like its American doppleganger Pentatonix, but there are some real comparisons to be made between the two groups. Most prominently, both groups feature talented singers, arrangers, and songwriters, and both exude an exciting, youthful energy. While MICappella lacks the singular identity of Pentatonix, this group does offer slick, radio-ready songs resting on creative arrangements that are thoughtful and easy on the ears. The arrangements emphasize the group's strengths, often feature a variety of hooks, and are never static or stolid. Did I mention the group released this EP a year before Pentatonix released its debut EP? Who's chasing whom here?

This group from Singapore does an excellent job of dropping in vocal or perhaps more notably mouth sounds for flavor, with pops percolating among the percussion in Oh Yeah!, a perfect whistle hook in Ready, Go, and sleigh bells in Ai Le. Though it would be unfair to compare them to the dynamic duo from Pentatonix, the rhythm section in MICappella is crisp, on target, and tasteful without being overbearing. The production on this EP is carefully and intelligently considered, allowing voices to sound natural and clean at times, while other times transforming them for effect in spots such as the smooth and thick organ sound in Ai Le and the dirty guitars in Oh Yeah!. These mixes are so tight, dynamic, and compelling that I was completely unsurprised to find names like Bill Hare, Tat Tong, Freddie Feldman, Dave Sperandio, and Ed Boyer (the liner notes aptly call them "the justice league of a cappella") all over the EP.

The ladies on MICappella are each talented and their solos are strong, but the real standout to me is guest singer Kelly Poon on Ready, Go. Her voice is vulnerable, capable of melting the listener's heart. She is so committed to the solo that I was again unsurprised to find that she actually wrote the lyrics for this song to match the music by group member Peter Huang. Lee Ein Ein is also a standout on track four, another group original that she co-wrote.

MICappella made a number of very smart choices with MICappella. First of all, it is an EP with five really great songs rather than a full-length album with only five good songs. Second, the songs are different without being uncomfortably disparate (with the possible exception of the country-tinged Always On My Mind). The production choices are accessible and interesting without being distracting, as are the arrangements. Finally, the solos are honest and committed, allowing for emotion and flaws without a robotic grip on tuning. Most impressively, this EP features three original tracks (two written by group members, one by a group member with guest Kelly Poon), which are catchy and well-crafted.

This is a consistently engaging and very addictive EP even if you (like me) don't speak Mandarin. In fact, the hooks keep coming back at me, creeping into my head day after day. If this is one of the groups leading us toward the future of a cappella, I'm getting my shades ready.

Selected tracks from this album are available on iTunes. To order a physical copy, send email to info@micappella.com.