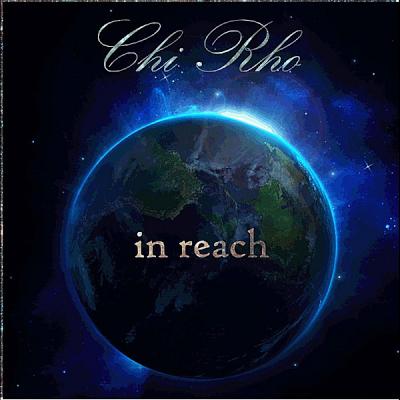 Wake Forest's all-male Christian a cappella ensemble Chi Rho states its mission clearly in the liner notes for its latest album, in reach. This group "seeks to share the hope they have found in Christ, love each other, and worship God with their lives and voices." The repertoire here falls into three categories: songs that are overtly religious (Your Grace Still Amazes Me and Prayer of the Children), songs by Christian artists (Tenth Avenue North's By Your Side and Needtobreathe's Something Beautiful and Garden), and miscellaneous other songs, which have an uplifting message and/or are by artists who are Christian (Bridge Over Troubled Water, Marc Broussard's Save Me, etc.).

The album is recorded beautifully and its best moments are also beautiful: the arrangement and delivery of Something Beautiful make for a great way to kick off the album; the arrangement was written by Chi Rho alumnus Alex Blake and member Alexander Ivey. The group follows this performance with Mercy, which is smoothly delivered with some nice dynamics.

Chi Rho's greatest asset is that it is never overly flashy: these songs aren't doused in crazy effects, the arrangements aren't overly complicated, and there are no ostentatious diva solos. Instead, these are strong arrangements delivered with emotion, giving listeners an enjoyable musical journey. Even the simple arrangement of Your Grace Still Amazes Me has some subtly beautiful dynamic moments; of course, I wish the group had pushed the dynamics even farther, but what they've got here is a good start.

Ultimately, though, in reach does get a little monotonous, and several of the songs fall far short of the others. Everything's tempo drags the song down, and the extended chords on Bridge Over Troubled Water have the same effect. The percussion on Save Me comes across as rudimentary compared to what's happening in contemporary collegiate a cappella now; that's the unfortunate flipside to the lack of flashy recording gimmicks.

In many respects, Chi Rho's in reach is a yearbook album: after all, the guys even go so far as to say that in their liner notes. These singers aren't trying to lead the cutting-edge of contemporary a cappella recordings, and so for the goals they set out for themselves ("to worship God with their lives and voices"), these singers absolutely succeed. This album is a lovely collection with several gorgeous, moving performances. In terms of musical performances, it's definitely a step up from most yearbook albums, which is why I awarded it a "4", but listeners should be prepared for an album rich with understated beauty.

One closing comment: these guys do a great job of crediting the original performer as well as the songwriters and publishing companies. This reviewer always notices when that's done appropriately, and I'd like to thank the members of Chi Rho for their diligence here.

An all-male Christian a cappella group from Wake Forest, Chi Rho deserves a pat on the back for remembering to credit the original composers and publishers in their liner notes. The booklet as a whole is extremely effective. It includes lyrics — helpful for those of us who are not familiar with contemporary Christian music — and a short note about what the album means. Ultimately, this unified vision and message is what makes in reach a success.

in reach is composed of mostly Christian tunes with a couple popular hits thrown in the mix. It's no surprise that the former is where the guys of Chi Rho hit their stride. While fun, both Mercy and Everything seem a bit outside the group's comfort zone. Bridge Over Troubled Water fails to settle into any kind of groove. It's a shame, because the lightheartedness of these tunes is necessary to supplement some of the heavier religious ones. The second half of in reach becomes a bit of a chore to get through, even with some winning arrangements to keep the listener on board.

The album as a whole features some really great singing. Chi Rho's love and passion for their faith is evident in each and every note. I wholeheartedly believe soloist Ross Boatwright on Something Beautiful and Your Grace Still Amazes Me. The ensemble singing in Prayer of the Children can only be described as gorgeous. Religious or not, it's easy to buy into the beauty of Chi Rho's worship after listening to in reach. It helps that the album is well engineered. From the first chord, the mastering work of Dave Sperandio achieves that sonorous, yummy encapsulation that defines modern a cappella recording.

Many of us look for groundbreaking arrangements, American Idol-bound soloists, or extreme recording techniques to define contemporary a cappella success. in reach proves that these things aren't necessary. If you come to the recording booth with passion and a cohesive vision, you've got the tools you need.

On in reach, the latest album from Wake Forest University's Christian a cappella group Chi Rho, the group looks to achieve more than the typical emulation or reinvention of music originally performed with instruments. Specifically, these men are using their voices to share and channel religious beliefs. This is nothing new, since the first known musical compositions were based on liturgical texts, and nearly all of the classical choral canon, even today, is based on requiems and other prayer-based texts.

This is noteworthy, because the thing which really jumps out of the tracks on this album is how passionately these guys believe what they are singing. In fact, the most compelling musical aspect of this album is how true and earnest the soloists are. Sure, it helps the non-denominational listener that quite a few of the soloists, including Ross Boatwright (twice), Keaton Lee, John McDonald, and Parker Bradway have pure and sweet voices. But more importantly they know how to communicate through voice, and isn't that what we're all really looking for in any music, regardless of what we think about the message being conveyed?

The answer is yes, and no. The solos stand out, but not much else does. The production by FlybyWest Music is generally clean and tastefully simple, matching the arrangements. Unfortunately, most of the arrangements are a bit bland and perhaps simplistic at times. Uncomplicated arrangements can be appropriate, especially for a few of the songs here, but they can also be uninteresting.

The inclusion of songs like Your Grace Still Amazes Me and Prayer of the Children, overtly religious and somewhat choral songs, is entirely consistent with the group's stated goals. I would only note that while both are well-sung, they also tempered any momentum generated in the beginning of the album.

In fact, the only songs with real punch, grip, and internal momentum are the first two, Something Beautiful and Mercy, and also More Than That. The rest of the album settles into a mid-tempo (or slower) rut, and I found myself losing interest in the arrangements a minute or two into most of the remaining tracks. A great soloist can only keep the listener engaged for so long.

The soloists of Chi Rho mean what they sing, and they sing beautifully. Everything else going on behind them is just ... very vanilla. For listeners who like plain jane, nice-sounding music, in reach will be perfectly satisfying. Those seeking a bit more sizzle, flavor, or spice in their music might find this album, aside from the soloists, a tad ... uninspired.

This album is available for purchase on Amazon, and the outlets below.