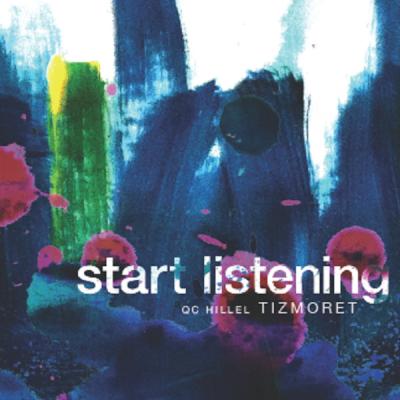 With its latest release, Queens College Hillel's Jewish a cappella group Tizmoret implores its audience to Start Listening, but some of us have been listening to them for quite some time — more than fifteen years in fact — and have watched the group blossom from sounding like a ragtag group of college kids who just wanted to have some fun singing songs they liked to sounding like a polished, professional a cappella ensemble with real aspirations of greatness.

What's a bit disappointing, then, is that this latest offering doesn't quite continue the upward trajectory that the group has been on beginning with Sounds in My Head and continuing with 2011's Transitory. In some ways, this is perhaps a more ambitious album of repertoire, but it's also less fulfilling overall.

Generally speaking, the album sounds full and rich and mostly wonderful, if perhaps a bit reverb-heavy. And with a producer like Jewcappella guru Mike Boxer, editing by Jeff Eames, mastering by Dave Sperandio, and mixing by an all-star line-up that includes Boxer, Ed Boyer, Marty Gasper, Nick Lyons, Alex Green and Alex Koutzoukis of Plaid Productions, and Carl Taylor, you'd expect nothing less.

Also, Tizmoret has never had a problem finding solid singers and reasonably good soloists. There is a tinge of the nasality that is (sadly) pretty standard in contemporary religious Jewish music but which sticks out like a sore thumb when applied to Israeli pop/rock (especially ballads). But the singing is commendable overall. That's not where the issue lies, either.

The single biggest and most consistent strike against this work is the arrangements — their straightforwardness, their repetition, and their minimal ingenuity and inventiveness (outside of studio post-processing). To be fair, there are scattered, fleeting moments where a nifty idea for realizing an instrumental moment vocally is realized in a 4- or 8-bar phrase. We hear it in the opening of Soul For Sale and again in the first verse of Gibor Shel Ta'uyot, both aided by some tasteful mixing choices. And nothing here is all that bad at all. But very little of it is outstandingly good, or more than a little interesting, or decidedly interpretive rather than transcriptive.

Of course, the tendency towards slavishly imitative/transcriptive arrangements is a problem that plagues a lot of groups and is not unique to Tizmoret. But in most cases, the arranging styles showcased here highlight rather than mask the issue. We get a fair amount of choruses that have little but loud, power chords in the background voices and lean on vocal percussion to carry the day. Sure, the overall sound is big and lush but it's also decidedly boring. It's perhaps even more of a shame because in some instances, there do seem to be rhythmic patterns buried in individual parts within those dense chordal backgrounds, but they're entirely swallowed by the larger group sound.

This also leads to another common arranging issue: lack of "space". Arrangements need to breathe, and there doesn't need to be sound on every eighth note beat of every measure. Indeed, where Tizmoret gets its groove back is in places where they do less rather than more. Also, arrangements need to develop and grow rather than stagnate after the first verse and chorus, which is far too often the model here. And please, I beg you, don't ignore or overlook or hurry through arranging the bridge. It's arguably THE transitional moment in a song (that has one) and far too often, it's feels like the part of the song no one knew what to do with so it's just kinda plowed through to get to the screaming final choruses.

I would be remiss in critiquing the arrangements so pointedly if I didn't also note that the material for which the group's veteran director, Daniel Henkin, participated or authored the arrangements is that which consistently scores better from me. That's perhaps understandable, as Henkin has been arranging a cappella for 20+ years, but it's no less laudable. The variation of textures and interweaving background lines in the first half of If I Die Young and most of Mei Nahar (I found the bridge to the end a bit of a letdown) specifically are the particular highlights for me.

Truth be told, even with all my grousing, if you're a fan of the Hebrew material covered on Start Listening, you'll likely enjoy the album. If you're a fan of the English material, you may have heard some of these tunes performed more interestingly elsewhere, but you'll still probably enjoy — though the (inexcusable) lack of translation of the (often very emotional) Hebrew material will rightfully frustrate you, even as the otherwise thorough and complete song credits may please you. If you're a discerning a cappella listener, however, I'd still pop in Im Eshkachech or Emtzah Halailah from Transitory over anything here and wait for Tizmoret's next album, which I can only hope will strike a better balance between interesting repertoire and more complex, textured, varied interpretations thereof.

Finally, after getting myself all hung up on this area for years, the English songs on a Tizmoret album have closed the gap with the Hewbrew songs. To highlight: the details, composition, and drive behind Paradise and Soul For Sale is pretty awesome, with arranger Mordy Weinstein earning most of the credit. There is no more "stronger" aspect in the quality between the English vs Hebrew, no more big energy and focus discrepancy, and this makes Tizmoret's preferred mixed language/mixed culture approach on albums easier to digest here as a meal instead of courses.

However, the carpentry of the voices on Start Listening is just as polarizing as the uneven approach used to be, so darn it, this isn't an easy sale. And I feel like it goes beyond the personal preferences inherent in vocal music engineering, which is why the production is my official new hang-up. For example, I take no issue with the bird choir that flies in to tweet away at the end of Mei Nahar. I guess sometimes the music just calls for a bird choir, and that's cool. But how about that manufactured-sounding choir that comes in at 2:47 on Od Ya'ir Alai? I say no thanks, this isn't the best use of vocal manipulation when the choir itself could handle it with natural variance and energy (read: Tizmoret is a 2-time winner of Kol HaOlam's National Collegiate Jewish A Cappella Competition). Then give If I Die Young a start to finish listen — how does that artificial coating work for you when the original is the epitome of rawness and exposure? Or how about the generic, sonically overworked background popping in for the first time at 1:11 of Kshehalachta that takes so much away from the natural power of the lead? If the production starts to compromise the given talent, oh dear.

To address the vital rest ... Not breaking tradition, the females still outshine their male counterparts, which has been true for each Tizmoret release I've heard. In particular, Darya Rubenstein (Do You Love Me) and Lauren Rosenthal (Kshehalachta, Soul For Sale) are equal parts soul and skill. Breaking tradition, the liner notes and package presentation are the best yet, with composers listed, gorgeous atmospheric art, and a strong professional vibe (though sadly, no translations). And as usual, lots of big names helped bring this work to light, with producer Mike Boxer getting the first line of credit.

In the end, Start Listening is worth checking out, but it isn't without controversy.

Despite calling itself the "professional A Cappella group" for the Hillel at Queens College in New York, Tizmoret is, for better and for worse, a fairly typical collegiate group. Yes, they have the benefit of experienced advisors like longtime director Daniel Henkin and producer Mike Boxer (of Six13). They also have some of the same flaws as other mixed collegiate groups, including arrangements which are occasionally too long or static, problems with liner notes, and women soloists with more expressive and controlled singing than their male counterparts (sorry, fellas!).

Setting aside the misnomer, however, Tizmoret does approach this album with a professional ethic, choosing a well-credentialed producer (Boxer has long demonstrated a knack for catchy, slick, pop and rock a cappella music) and a variety of talented mixing and mastering engineers (Boyer, Taylor, Plaid Productions, Gasper, Lyons on mixes; Sperandio for mastering). Everything here sounds good, with punchy percussion and swirling backs, though it is occasionally a little heavy on the ears, particularly in the first few tracks. Other times, the sound is polished and mass-market-ready (see Ed Boyer's work on the sticky sweet final choruses in Od Ya'ir Alai).

The female soloists generally bring the most compelling moments to the table, with Lauren Rosenthal's rich and haunting gravitas and Nurita Abramowitz's tender nuance on Kshehalachta, Marissa Rosenfeld breaking her careful restraint on the choruses of Od Ya'ir Alai, Daniella Rosenblatt on The Ballad of Mona Lisa, and Rosenthal again on Soul For Sale. The guys aren't bad (particularly the touching duet on If I Die Young), but they don't have the control or the knack for conveying and exploring the message like the ladies do on Start Listening.

The liner notes are apparently better than the group provided on their last album, Transitory, as the group now credits the composer as well as the original performer, and this is praiseworthy. The group also does a great job of crediting the various engineers involved in the recording process. Although I am Jewish, as is much of Tizmoret's target audience, the reality is that I do not speak fluent Hebrew, nor will many who buy this album at a Tizmoret concert or online. On an album with four songs entirely in Hebrew, the group would be well served to include translations, especially if they hope to make the album more broadly marketable.

This brings out an important overarching point: Tizmoret doesn't hide from its heritage and identity. The first thing you see when you open the CD case is a blurb about the group's success as a "Jewish A cappella" group in competition and recorded compilations. But this year, the group was nominated for a CARA for a mixed collegiate arrangement (The Ballad of Mona Lisa), and Tizmoret need not pigeonhole itself as just a Jewish group. The mixture of American, British, and Hebrew pop tunes on this album will appeal to anyone who enjoys good singing, competent (and sometimes better) arrangements, and slick production and beats. If the group is interested, Tizmoret is ready to step up and compete with all collegiate a cappella groups, not just those with whom it shares a religion. Sure, they have work to do ... get rid of "now-now-now" and "wow-wow-wow" syllables, trim unnecessary fat from a song (Paradise), give the fellas some coffee before they record their parts, and maybe avoid outlier song choices like Michael Bublé's Hollywood, which sounds fine but seems out of character for the group. They also just miss "5"s for a few songs, with Paradise, Kshehalachta, and Mei Nahar barely missing the mark.

With Start Listening, Tizmoret should have the attention of the entire a cappella community. We're listening — what else ya got to say?