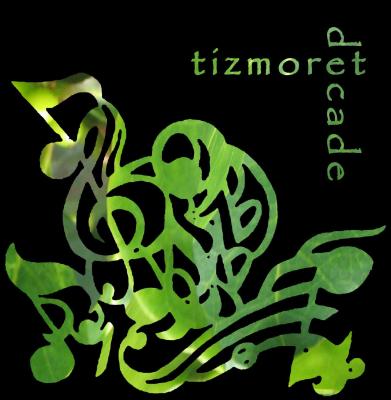 Tizmoret has a warm, appealing sound, which makes the poor tuning an even bigger shame. Decade has so many lovely intangibles, but the musical foundation just isn't there for this group to reach a broad audience.

Pitch works against this group on pretty much every song, in pretty much every way. Darkeinu, for example, starts off with a lovely finesse and a beautiful touch from soloist Alisa Henkin. The song has so much more life and groove than other versions I've heard (Jewish a cappella has been big at RARB this year). But when the song builds, the soloist and the group seem to part ways. The program recurs and intensifies on the next cut, I Hope You Dance, where the soloist and the background are practically in different keys. That song is a particular low point for the background, but there isn't really a high-quality contrast to point to.

I think this group had the potential to sound good, but they needed more rehearsal and more time in the studio to pull it together. The final cut, Queen Medley sounds like a concert recording, although the liner notes don't identify it as such. It's an impressive endurance feat, and I bet it packed quite a wallop from the stage. But as a recording, it's more of a run-on sentence with its poor tuning and messy blend. The rest of the songs sound cleaner, but they never really pull together.

Tizmoret has a good sense of pacing. The arrangements are on the basic side, but the song selection is pleasantly diverse. The American pop standards mesh suprisingly well with the Hebrew songs, which themselves have a nice variety. I liked the dark timbre of Esah Eini. It takes the album back a notch, then leads nicely into the sparkly soprano solo (credit the lovely voice of Alison Schimel) that opens the upbeat Ki Lishuatcha. The Storm Is Over Now benefits from a standout tenor soloist (Dov H., if I'm deciphering the liner notes correctly) and strong supporting leads, but it too sounds like it was recorded in one shot, in one room, without any of the studio care and feeding we've come to expect.

I guess the best way to approach this CD is as a demo tape. If the liner notes are any indication, these singers work a fair amount. The disc shows that Tizmoret has a bunch of nice singers and a bunch of nice songs. The nice album will just have to wait.

Tizmoret seems to be going through a identity crisis. The liner notes bill Tizmoret as "The Queens College Hillel Professional A Cappella Choir", celebrating its tenth anniversary. The notes also describe Tizmoret as "a bunch of people with nothing better to do on a Wednesday night but drive out to Queens College, eat, hang out, and sing a few a cappella tunes when the mood strikes". You can't really have both, Tizmoret. Are you trying to be a polished, professional(ish) group? Or are you a bunch of college friends who hang out eating pizza and occasionally singing and sounding slightly better than if you were to randomly assemble people off the street into an a cappella choir?

If we use the album Decade to make the call, the verdict is clear. Decade is essentially a decent high school album, recording a cappella standards with enthused but undisciplined (and generally unmixed) voices. As a rule of thumb, the Hebrew songs on Decade are passable but listless, and the English songs on Decade are just plain awful. Better production could have played deus ex machina here, polishing the solid areas to a nicer sheen and smoothing over the rougher spots. As it is now, most of the album sounds like it was recorded and mixed in a public restroom; the background vocals are buried and hard to distinguish. There are moments of promise: the unison vocals that end Ghost, the edge on the backup singers on the choruses of I Hope You Dance, and the raucous gospel feel of The Storm is Over Now. But awful tuning slows any momentum Tizmoret starts to build in just about every track.

I'm usually inclined to excuse collegiate identity crises. Isn't that what those years are for? But in this scenario, I think it's pretty plain what's in front of us.

A mix of traditional and contemporary songs sung in Hebrew and English, Decade is the 10-year anniversary album created by Tizmoret, the Queens College Hillel professional a cappella choir. Traditional works are their strength, and their love of singing is warmly apparent.

The singers on Decade claim to represent "ten years of pure musical genius". They didn't live up to their slogan, but the blame for this shortcoming lies more with poor album production than the choir's vocal performance. The recording sounds like the group is singing toward area mics, with the soloist and VP given their own mics. This approach rarely works in a cappella, where syllables and parts are extensive, and it certainly doesn't work here. The background singers are quiet and muffled, and it's often difficult to tell what they're saying and if they're in tune. The sound would have improved greatly if more mics, and thus more tracks, had been in place. I understand they're a "choir", and most choirs don't choose this expensive route, but the listener should still be able to hear the choir clearly, and on Decade, it's completely hit-and-miss.

Fortunately, the weak production still allowed admirable moments to come through. Soloist Alisa is lovely on Darkeinu, and Dov H. has a strong and beautiful tone throughout Decade. The highlight of Decade is Shma Elokai (K'shehalev Bocheh), where the quiet choir still radiates through big and solid locked chords and the passionate soloists embellish and carry the tune to great heights.

And unfortunately, the weak production still allowed mistakes and oversights to be heard. I Hope You Dance is delivered by two soloists — one of whom has a soft and gentle pop voice, while the other delivers the tune with forceful, extra twangy pipes. The result is an oil and water mix, making the track one that listeners will probably skip. The Longest Time also employs multiple soloists, the last of which intermittently gets a bit ahead of the beat. Decade closes with a nearly nine minute Queen Medley. After the first tune, Fat Bottomed Girls, the choir regularly sounds uncomfortable, unsure, and out of its element. Intonation and rhythm problems keep popping up, and the arrangement is weak and uninspired for the rock-it-to-the-max approach Queen takes.

Overall, Decade is a grab bag of highs and lows. I like their energy and enjoyed the Hebrew works, but the muddy production kept the music and emotional connection distant.