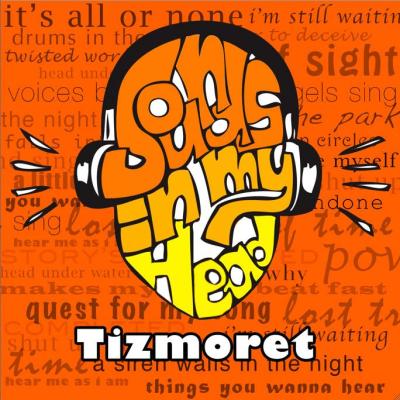 Tizmoret sounds like they'd be fun to hang out with, especially if they sang at your party. After that, it might be nice to have the album. Otherwise, Sounds in My Head is a yearbook that your CD collection can probably live without.

Tuning is just not there for this group, not at the standard that a good recording requires. A track like Feels Like Home, sung with feeling and a talented soloist, can't rise above its basic technical underpinnings. There isn't a quick fix for this. By the sound of it, Tizmoret would need a few workshops with an experienced director followed by some intensive rehearsal. That said, this is pretty music. The chorus of Yofyafisa is sweet and melodic, with some moving moments. Into the Night has a very nice rhythm. And almost all of the songs seem like they would sound just fine in performance.

Love Song is the best track on this album. The main soloist sounds great, and she's backed by a very able percussion line. With that kind of rock-solid foundation, the rest of the group fills in well and gives the song a good overall groove. At such a point, the imperfect tuning is just an afterthought. In contrast, El Eretz Tzvi falls apart by pretty much every measure — no groove, no fit with the soloist, and no escape from the out-of-tune block chords.

Another good moment: the soloists on Mimaamakim, especially in their breakout bit towards the end. I liked the guy's voice especially — a bit unpolished but soulful and centered. The female leads on this song have a more professional sound, and as a unit the soloists sound great. Champagne High gives the guy soloist (Yisroeli Cohn) a reprise and he's nice to listen to there as well.

One last shout-out for Josh Russak, who the liner notes say provided the vocal percussion for the whole album. He sounds great throughout, a feat that seems especially amazing given the inconsistency of the rest of Sounds in My Head.

Overall, Tizmoret is a friendly group, even if they didn't make a standout album. Here's hoping they stick with it and continue to be good company at parties.

Tizmoret, Queens College Hillel's professional a cappella choir, takes a giant step forward with Sounds in My Head, which, thanks to the talents of Six13's Mike Boxer and studio veteran Ed Boyer, improves immeasurably on the disastrous mix and sound quality that plagued its 2006 release Decade.

In fact, so much better is the production of this album that it's something of a blessing and a curse. On the one hand, the group has never sounded better than it does here: the tuning missteps are few, if any; the rich, expansive block chords favored by the group in many of the arrangements come shining through; the VP is crisp and varied (though perhaps a bit too sibilant at times); and the blend is generally silky smooth. On the flip side, one of the group's live performance hallmarks is an energy and enthusiasm that is lacking here. There's a formality and a stilted-ness to a lot of the background singing, a palpable level of concentration that may have improved precision, but saps the vitality and gusto which is usually present in a Tizmoret performance.

The move to professional production also puts additional pressure on Tizmoret's material to withstand the scrutiny of crystal-clear recording, and the results are a mixed bag. The group's director, Daniel Henkin, has been a part of the a cappella world for 20+ years, going back to founding of the Columbia Clefhangers in 1988, and his arranging style through the years has typically favored a background block that moves essentially in unison on a given rhythmic and/or syllable pattern with the occasional countermelody or syncopated rhythm as ornamentation. It's a pre-"wall of sound" approach — a cappella "old school" if you will — emphasizing lush, well-voiced chords to anchor an arrangement and eschewing the layers upon layers of rhythms or individual "instrument" lines that are favored by so many collegiate groups these days.

In limited doses, and often on the less pop-oriented repertoire, this sort of thing can be most refreshing. Feels Like Home is lacking the truly knock-your-socks-off solo that will blow you away, and a few of the syllable choices are clunky and exposed, but its gospel feel is well-served by group's resonant, chordal, and choral sound. When Henkin and his student arrangers move a bit more toward the mainstream and opt for a level of rhythmic complexity that matches the harmonic richness of their sound, the work can be truly wonderful. Thus we get the rockin' opener Heaven and the back half of Mimaamakim which does well to capture the energy and hint at the multicultural inspirations of Idan Raichel's original.

Much of the rest, however, feels like a lot of the same. Into the Night feels lifeless with its background built predominantly on "oohs" in the verses and "way-ohs" in the chorus. Yofyafisa isn't a terribly interesting song in the first place and its melismatic passages give the group some issues in an arrangement that is more old-fashioned than old school. Backgrounds for Annie Waits, Champagne High, and Not Ready to Make Nice feature limited deviation from the unison block, and especially on the latter two, feel exceedingly vertical — with plodding, unimaginative eighth-note rhythms and no real development whatsoever as the song moves into the second and third verses/choruses. Love Song's background is a bit of a jumbled mess, especially in the chorus where some of the chords sound downright wrong (or perhaps just ill voiced). And El Eretz Tzvi is a bizarrely emotionless take on a classic song that is usually performed with dramatic feeling.

Sometimes albums containing a mix of pop hits and cultural songs just sound too random, too thrown together, but it works well on Sounds in My Head.

Sounds in My Head starts out with brilliant promise. If you want a natural high, listen to Tizmoret sing Heaven. It sounds so bright and hopeful you'll get giddy chills. Moving along, a lot of smart liberty is taken on Where I Stood, which is performed here a bit under-tempo. By doing so, the lead can really explore her riffs and settle in on growing notes while the block can linger longer over sweet chords. It adds an extra layer of effective desperation.

The music is less notable after Tizmoret's great opening. Annie Waits is the only true puzzler, with a robotic choir sound and a lead who often can't hit his notes in the center of the pitch. The arrangement is lackluster, too, and heavy on worded phrases sung on easy chords. Interestingly, there's also a lot of worded phrases for the background to sing on Feels Like Home, but there it turns out beautifully. On the hit side, Mimaamakim has striking leads, an engaging background, good movement, and unparalleled passion. At Yaffa is also very strong, and would have made a more dynamic closer than Not Ready to Make Nice.

Female leads are particularly strong throughout this album, with a few ladies exceeding their young years with vocal ease and control. Sara Rosenbloom is a knock-out on Where I Stood, and Rachel Catallo shines on Feels Like Home.

Talented Mike Boxer of Six13 fame produced Sounds in My Head, while Ed Boyer took care of most of the mixing. Their a cappella forces combined are responsible for the seamless and smoothed sound of this album (refer to the opening line of this review). The group's prior release Decade had very weak production, and hearing Tizmoret's talent so crisply this time around is most welcome.

On a product note, the physical CD looks like it was made in someone's dorm room, with a pixelated black font on a white background. Not that this takes away from the good music, but it certainly doesn't add anything to the group's image.

Far surpassing their efforts on Decade, Sounds in My Head is an ambitious and recommended album.