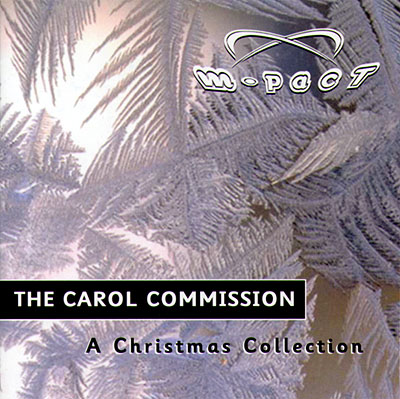 Oh sure, M-Pact's The Carol Commission may sound be full of twinkling pop arrangements, but the disc suffers from being too choral in its sound. On some of the tracks, there is simply no dominant soloist, and on others, the solos sound like an afterthought. Instead of solos, Take 6-esq group harmonies take center stage. It's pretty, to be certain, and it does create an interesting contrast to the crisp percussion, but it often lacks the passion that the songs need to really take flight. Without a commanding solo, most of The Carol Commission will just wash right over you. This disc gets a low score for soloists, not because the solo voices are bad (they're quite good, actually), but rather because you have to wade through a lot of other stuff before they ever come out of hiding.

You have to hand it too them for the concept though — Most of the songs are crafted by outside arrangers. Sadly, the credits fail to identify the group of origin of many of the arrangers. Even the most die-hard a cappella fan is bound to be stumped by some of the arrangers claim to fame. I knew Yukimo Matsuoka-Young by name only, but I was stumped by others. I know some of their work, but their names still don't have brand name recognition. This may seem like a small oversight, but knowing that a certain song was arranged by the guy from Take 6 or the guy from Naturally Seven would add an extra level of enjoyment to the disc.

The album actually fairs best when it strays from the traditional material. Morgan Ames wrote and arranged De King is Born Today, which is certainly the album's standout track. It's an upbeat tune with a refreshingly strong soloist (by whom, I can't say — it's not in the liner notes). Morgan's work gets a much more exciting treatment here than it ever received on Jackson Millar's Christmas album. Strangely, the song is written in moderately offensive dialect. Why? Hell if I know. Another original, As December Fades Away still features the Take 6 harmonies, but it skillfully balances all that blend against a driving pop beat. Yukimo Matsuoka-Young's arrangement of O Come, O Come Emmanuel is also enjoyable, not only for its jazz tangents, but also because it features a clear solo line.

It should also be noted that the percussion throughout the album is clean, clear, and enjoyable throughout (although, it only helps contribute to the creepy sound of the Dance of the Sugar Plum Fairy).

Overall, The Carol Commission has potential, but it's marred by the dull tone of the opening tracks. The third song, Christmas Time is Here sadly sets tone for the album: it's always pretty, but at an epic 9+ minutes, it drags like crazy.

Wow, I wish I had been able to review this album before Christmas had already passed. If I had, I would have told everyone that they should get it if they want great sounding Christmas music. m-pact has put together a thoroughly professional, polished, inventive album full of remarkable music called The Carol Commission.

The concept is simple: Christmas songs performed by the amazing quintet m-pact. But to add a twist, m-pact called up a bunch of their friends, peers and mentors and asked them to arrange all of the songs. So there is quite a collection of remarkable musicians from the a cappella world who have arranged traditional holiday songs, and even a couple of original tunes as well! Every song is a lesson in arranging, as well as in flawless singing and production for those thinking of going into a recording studio any time soon.

The album starts with a jazzy, swingin' cut of Caroling Caroling that is just great. It is followed up by a funky take on Tchaikovsky's Dance of the Sugar Plum Fairy that includes some lyrics from Amy "Bob" Englehart of The Bobs (of course). Every song is impeccably performed by the boys, hitting every complex jazzy chord with aplomb, every harmony fitting just right in your ears. My personal favorites on the album include Caroling Caroling, De King Is Born Today (a fun, calypso-esque number), and As December Fades Away. In fact, As December... is the best track on the album, because it is the most non-traditional. It is a funky, rythym-and-bass-driven song with lyrics that look at the holidays from a decidedly personal (and decidedly moody) perspective. It is a remarkable song that made me gasp and stop in my tracks as I heard it the first time — partly because it is so different from the rest of the album. However it does not seem out of place. Not at all.

OK, to summarize: Great group, great songs, great arrangements, remarkable musicality, beautiful production. Buy it. The Carol Commission is one of the best albums of the year.

The Carol Commission: a blend of eleven tracks that move gracefully from one Christmas song to another (graceful, but for one hiccup). Each track beautifully produced, a worthy addition to the seasonal CD changer. And the liner notes are a compliment to them all, setting the tone with it's stylized tribute to 'Twas the Night Before Christmas.

A combination of some timeless Christmas classics, some extreme twists to others (Betcha didn't know there were words to the Dance of the Sugar Plum Fairy, did ya?) and two originals, each distinct in tone and flavor, and yet carrying off a Christmas feel throughout the CD.

The only (slight) hiccup comes toward the end, when the calypso driven Da King is Born Today left me in a Jamaican Christmas mood, all mellow and such, only to be startled by the rock tinged As December Fades Away. Then it slides back into a lyrical, melodic arrangement of Away in a Manger. As I said before, each track is well-conceived, from arrangement to recording... I chalk it up to difficulty in figuring out where to put "As December Fades Away", as it is quite jarring from it's lead in and lead out tracks.

The mood I got from this entire CD is that of playing it at a Christmas party, with a fire burning in the fireplace. What good this does you as a consumer may not be readily apparent, but what I'm getting at is this: next Christmas, when you invite your throngs of friends for the party in your living room, your studio apartment, or your dorm room...slip this CD into the player; it belongs there, it breathes there, it needs to be there. It will definitely set the mood for your party and, should your guests be so wise as to listen, it will set the tone of the conversation. In short, you've got nine months to buy this CD for Christmas 2000...buy it now, because the Christmas rush will come, and you don't want to be caught short.

Well, that was easy. It doesn't take a lot of effort to review an album like this. It's fantastic. There are only a handful of groups in the entire world who produce stuff as good as this. Impeccable blend and tuning (well, except for the triangle in Do You Hear What I Hear?, but I'll get over it), outstanding balance and great arrangements. I don't have to think hard about how to rate this disc. You'll see lots of fives.

In the category of subjective opinion, I do need to point out a few things that bugged me a little. First, often the vocal percussion came across as a little, um, hokey. Particularly the tom fills and kicks in the first two tracks, which sound an awful lot like somebody just going "doom-doom-doom" into a mic. I would expect more studio effects on the VP, but, maybe they were going for a more "acoustic" sound.

Also, m-pact may as well just start billing themselves as a mixed quintet and stop kidding everyone. Britt Quentin is an alto — or, as his bio on their web site states, a "power alto, hooty soprano". And at times, he really does sound like a woman, not just a guy singing really high. His lead on Jingle Bells is a good example. So, if you have an aversion to mixed a cappella jazz (too bad, if you do), then some of the tunes on this disk may not be for you. Otherwise, just know that Britt sings really, really high. No news there if you've heard these guys before, maybe a little surprising if this is your first listen.

Plenty of incredible arrangements on this album. I think my favorite was O Come, O Come Emmanuel. Dance of the Sugar Plum Fairy has to be one of the most innovative arrangements I've ever heard. Carol of the Drum is way cool. The only exception would be Christmas Time Is Here. The original is a short little ditty — here it is stretched into over nine minutes. The tune could easily have wrapped up at around the six minute mark. I mean, it was beautiful, but after listening I felt like I had just eaten an entire bowl of cool whip. Too much of a good thing.

So, my advice to you: ignore my personal preference quirks above, and go buy this disc. You will find few a cappella jazz recordings of this quality in your lifetime.

This CD represents everything that is good in a cappella. m-pact, as on previous albums, has captured the grace and beauty of pure vocal singing, tricking the ear into oblivion.

The album, which consists of many arrangements from prominent musical minds, is a compilation of Christmas standards and originals, all done with the m-pact flair. The tuning is impeccable and the song selection is strong. They have solidified their production style on this album by consistently mixing the high-tenor vocal (Britt) far out in front of the mix. This creates a clean sound and allows the harmony to live in it's own space.

The solos on this album are incredibly strong, highlighted by Greg's performance on Little Drummer Boy. This album allows the listener to appreciate the sheer vocal talent possessed by each member of this fabulous group. The bass mix is very clean and not overly soaked with drone. The production quality is great with one exception: the overall sound lacks the out front nature that "non-a cappella" vocal groups seem to achieve. Overall, the album is a wonderful representation of the group and is a must have album for the holidays.