Best of CollegeDesis A Cappella (2012) 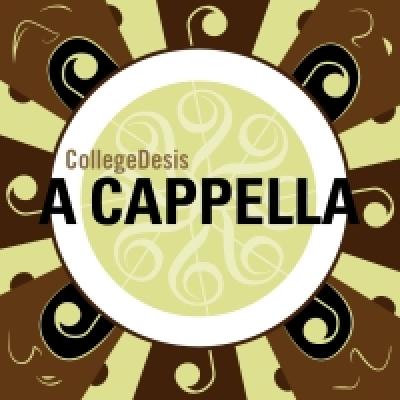 Best of CollegeDesis A Cappella, a compilation release by CollegeDesis, showcases thirteen Hindi/English tracks by seven groups from different colleges. Having been lucky enough to perform such music myself, I was particularly excited about this album. I was rather disappointed after listening. There are, of course, stronger tracks than others. However, the arrangements are mostly mediocre and the performances lack feeling. The album does manage a unified soundscape considering the number of different groups featured, and some of the song mash-ups work well.

Chai-Town’s Tuihe Bhula Diya and Dhadke Jiya both utilize simple arrangements that effectively represent the originals without any of the cool factor. The performance is precise, but emotionless.

Brown Sugar’s Halo/Shukran Allah is one of the better tracks. Nice solos. The Hindi section is more generic in the arrangement though ... the two songs interweaving is where it really shines. Lips of an Angel/Bheegey Hont Tere is repetitive, though consistent between songs. The English song is the weak point here. It sounds heavy and cumbersome and a few clicks too slow.

Raagapella's Woh Lamhe is a darker adaptation of the original, though not very dynamically arranged. Oru Maalai manages to be similar to the original, but group chord movement in one direction repeatedly jars the ear and lessens overall impact. Despite this, it is my favorite cover of the album.

Dhamakapella’s sexy, hip-hop flair results in the two best executed tracks on the album. Airplanes/Tujhe Dekha To and Ishq Kabhi Kariyo Na/Naughty Girl combine legitimate Western sensibilities with South Asian songs to create a hybrid that is a pleasure to listen to.

Taal Tadka’s I’m Yours/Tere Bina starts promisingly with a beautiful solo voice. The arrangement drags it into mediocrity until the two songs finally come together. I found I’m quite fond of Tere Bina though. Fix You/Maa is another slow and repetitive arrangement.

Hum A Cappella’s O Re Piya/Rolling in the Deep is awkward. It finds a nice, perhaps too slow groove at the beginning, then suddenly shifts into a much faster tempo that forces Adele’s poor understudy to work way too hard to keep the solo smooth and locked in. The arrangement isn’t fantastic, but the tempo choices really hurt this track.

Maize Mirchi’s Drops Of Jupiter/Pehli Nazar Mein is the most solid ballad of the lot. The arrangement is full, though not very diverse. The lead on the English song has a nice voice, but lacks feeling. Tu Hai Wohi/Dirty Diana sounds full as well, but is extremely repetitive. The vp on both these songs is quite nice.

If I were permitted one word to describe this album, it would be "safe". Mash-ups and combining languages is all well and good. No risks were taken. There were no distinct moments that made me sit up and take notice. A nice, average release. It’s worth buying though if you want to be introduced to some new Hindi music.

CollegeDesis is an organization whose goal, according to its website, is "to build tools to help South Asian organizations connect, collaborate, and share". The release of the Best of CollegeDesis A Cappella album certainly works towards that goal. The a cappella groups who are represented here are generally solid, and this album flows together cohesively without sounding like a compilation.

These groups excel at dynamics; singers stretch their phrases beautifully. Woh Lamhe in particular has gorgeous phrasing and moving dynamics; this is a perfect example of not needing to understand the song's language to connect with the obvious emotions delivered by Stanford's Raagapella. Raagapella contributes again later in the album, with more gorgeous dynamics adding to the subtle urgency of Oru Malaai. Chai-Town (from University of Illinois at Urbana-Champaign) also delivers beautiful dynamics on both of its songs here, Tujhe Bhula Diya and Dhadke Jiya.

There are several mash-ups that are seamlessly executed. I have already gushed about the two tracks contributed by Case Western's Dhamakapella in my review of its album Pehli Nazar — First Look (and guess what — they're still good! Especially Ishq Kabhi Kariyo Na/Naughty Girl, where the songs sound as though they were made to be put together). Georgia Tech's Taal Tadka also knocks it out of the park with Fix You/Maa; while the Fix You opening doesn't really bring much new to the song, the re-introduction of it in the bridge after Maa is so smoothly executed that I almost didn't even hear it coming.

But the mash-ups don't always work and certainly aren't always necessary. On Maize Mirchi's Pehli Nazar Mein/Drops of Jupiter, it's actually Pehli Nazar Nein that's the best part of the track; the group sounds most comfortable on that song, and the Drops of Jupiter intro and closing both sound a little phoned-in (and not nearly as interesting musically). The same is true with Taal Tadka's I'm Yours/Tere Bina and Hum A Cappella's O Re Piya/Rolling in the Deep; O Re Piya is subtle and haunting, while the off-kilter Adele cover sounds forced and awkward.

Still, the folks at CollegeDesis have done a great job in putting together this compilation; I love that with only one exception, there are two songs by each group represented, which gives listeners the ability to get a better sense of a group's aesthetic, style, and sound. (Anyone who has purchased an album based on one song — and been disappointed by the rest of it — will certainly appreciate this approach!) If nothing else, Best of CollegeDesis A Cappella is an interesting and easy-to-listen-to primer of the contemporary South Asian a cappella scene, and even singers outside of this scene could learn a lot from the dynamics and phrasing on the best tracks here.

Mystery is not always a reviewer's best friend, which is the biggest reason why I found it so difficult to review Best of CollegeDesis A Cappella, a compilation of songs performed by South Asian collegiate a cappella groups. Knowledge and context can be crucial for assessing what a recording is trying to achieve and whether it succeeds. Since this compilation has a dearth of both, I would prefer to give it an "incomplete" in a number of categories. Instead, I am stuck weighing the little that I know about it with what I hear. The result is a fairly average and consistent collection of recordings which tend to be missing spark and complexity.

Back, for a moment, to context and knowledge. Though we don't know which individuals produced, performed (or soloed) on, or arranged these tracks, reasonable reviewers could disagree about whether such information is necessary to writing a review. But we also don't know exactly what CollegeDesis is all about, why these particular groups or songs were chosen, and what criteria governed. We don't know what language many of these songs are in or, most importantly, what they mean. This information is actually critical to reviewing the music. Without knowing what Shukran Allah is all about and what the lyrics mean, how can I know if its attachment to Beyonce's Halo is achingly apt or laughably inappropriate? Take a look at this review from Catherine Lewis to see what I'm talking about when it comes to assessing a group's decision to blend two or more songs together.

Alright, so without much of this information, I am guided purely by my ears. As I listen, I am asking: does this compilation sound good or bad, and why? The answers, unsurprisingly, are mixed. The album apparently features seven different groups, and I would assume each group relied on different arrangers and producers, though I cannot confirm this. As should be expected with a compilation, there is a range of quality among the groups and their tracks. Some of the arrangements are dynamic and exciting (Halo/Shukran Allah, Ishq Kabhi Kariyo Na/Naughty Girl) but others are stolid and lethargic (Woh Lamhe, Drops of Jupiter/Pehli Nazar Mein); some have moments of both (Airplanes/Tujhe Dekha To). A few of the soloists are very talented and skilled (Tujhe Bhula Diya, the female soloists on Halo/Shukran Allah, Ishq Kabhi Kariyo Na/Naughty Girl) while others are average at best. Production ranges from crisp (Halo/Shukran Allah, Ishq Kabhi Kariyo Na/Naughty Girl) to flat (O Re Piya/Rolling in the Deep, Lips of an Angel/Bheegey Hont), with the middle ground covered as well (Airplanes/Tujhe Dekha To). At times, songs just sag (the O Re Piya portion from Hum A Cappella, the first three minutes of Fix You/Maa).

Another way of assessing a compilation is by asking whether the individual tracks form some kind of cohesive whole, and here CollegeDesis is successful. These songs are stylistically similar, in terms of tone and format; nine of the twelve take an English language pop song and meld it with what I assume to be South Asian music. The groups are on a fairly even plane when it comes to their approach, and in many ways this does feel like it could be a single album by a single group, with the exception of some discrepancies in production crispness and arranging skill. At times, the overall tone veers too far into sleepy passivity, but this is often true only for portions of the music, and is rarely pervasive.

There are some really nice moments of cultural blend on this compilation, but I simply can't tell whether the particular marriages work thematically. If you are someone who appreciates South Asian music and culture, or a blend of that culture with American pop, CollegeDesis may well be for you. Otherwise, you may want to wait for a compilation that can inform and educate as well as entertain. Musically, I would encourage many of these groups to work hard on injecting energy into their singing and more originality into their arrangements. It is not always enough to create a medley between two songs with common elements; you still have to keep the individual components interesting, a goal which too many of the groups fail to do here.

Proceeds are available to almost 50 South Asian A Cappella groups in the country to help pay for events, competitions, and studio time.