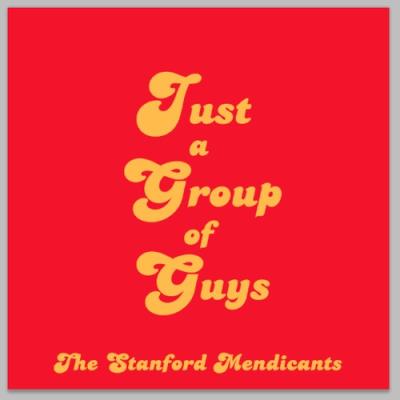 Just a Group of Guys is a shining example of honesty in advertising. The Mendicants celebrate 50 years by largely abandoning high level musical, creative, and artistic goals in favor of a simpler aesthetic: Hey, we're singing and that's fun! This isn't an album for people who spend a lot of time with a cappella, picking apart arranging and production choices. Nope. This is for people who go, "Ooka chaka? I love that song!" Fun guys singing well-known songs. The twist? It's a cappella. (If that's not a twist for you then keep on moving.)

The liner notes fail to credit any composers. Lead and arranging credits just use first names, even though there's plenty of space. The art design may be summed up as red with gold writing.

There are some troubles that are particularly hard to overlook. The Power of Love literally sounds like it's playing about 40bpm too fast. It also ends with a spoken apology that feels a little too apropos.

There are positives as well. Bill Hare (mix and production) and Russel Kamp (recording and editing) do stellar work making almost every track listenable and technically sufficient. Fix You holds our attention with Eric Hallett's unexpectedly rich and textured bass. And the song selections themselves span the better part of the last century including the traditional, beloved Danny Boy as well.

This album won't go down in history, but fans can hear songs they like sung in tune and with good energy. Just a Group of Guys delivers just what they promise.

The Mendicants are the oldest a cappella group at Stanford. But with this release the Mendicants are behind the best groups at Stanford, a university that boasts some of the top a cappella talent in the country. I hate being so hard on these happy-slappy guys in their sharp jackets, because can't we just enjoy the happy-slappy good times together? But we don't solicit albums for review, and Just a Group of Guys has some serious arranging issues holding it back.

Big smiling personalities shine through on Just a Group of Guys, and yeah, I bet partying with this bunch or even sitting in the cafeteria with them is a seriously memorable event. If they want to sing 500 Miles with silly Scottish accents, fine by me!, but having the same syllabic pattern underneath for the whole run negates the chances of repeat listens. A super literal transcription of If I Had a Million Dollars that bops along with "ba"s! on 2 and 4 from start to finish? If that's your cup of tea so be it, but again, I'm not sure who'll keep it in their library. Trying to shake up Power of Love by changing the tempo to Turbo Time, whereupon we can only catch every second word the soloist is singing? Hey, it's your album and your money spent, I guess.

Uncreative arrangements are certainly the crux here; I'm struggling to find anything compelling to come back to in these tracks, and hearing that can't feel good. Nothing sounds imaginative or modern or challenging or fresh enough. I like the funky groove on Hooked on a Feeling that suits their vibe well, and the occasional unexpected chord that pops through on Can't Help Falling in Love is neat, but "well" and "neat" are about it for my personal connection. Overall, the music is just too basic, and the group blend could be cleaner, too.

I don't want this group to stray from its swell laid-back feel or repertoire preferences just for the sake of change — that'd be silly in the wrong way. Plenty of all-male groups have the r&b and hip-hop realm well-covered; others put out dance tracks that are radio-ready; still others sing nothing but oldies and do it absurdly well with swagger and style to boot. I'm just looking for more challenging charts, less repetition in the arrangements, and more surprises in the whole package. (And properly credited liner notes, if I haven't asked for too much already.) All of this is a tall order, but with fifty years behind them, perhaps the Mendicants are ready to be daring and remake their mold.

Just a Group of Guys, the latest studio release from the Mendicants of Standford University, is consistent but unimaginative. Following in the steps of Sh-Boom (2012), Roses In My Hand (2008), and twenty-three other albums, Just a Group of Guys is "just another album".

Despite giving energetic performances, the song selections and arrangements are far too similar to hold the listener's attention. Down On The Corner, If I Had a Million Dollars, The Power of Love, and Hooked on a Feeling all start to sound like the same song after awhile. Though we are given a break from these mid-tempo throwbacks for some current stereotypical a cappella with Home, Some Nights, and Fix You, which almost every all-male collegiate a cappella group has either sung or is currently singing.

The arrangements never seem to reach the talent level the Mendicants possess. These gentlemen are talented enough to take on more than transcriptions. The fascinating part about the arranging, though, is the consistency of sound. The quality and sound of each arrangement is nearly identical; an exploit that even some of the most accomplished a cappella groups struggle with.

Just a Group of Guys is pleasant but bland. The soloists and production are good and the arrangements are executed with precision, but if you're searching for innovative all-male a cappella you should look elsewhere.

If you are interested in purchasing a CD, please email mendicants.business@gmail.com.