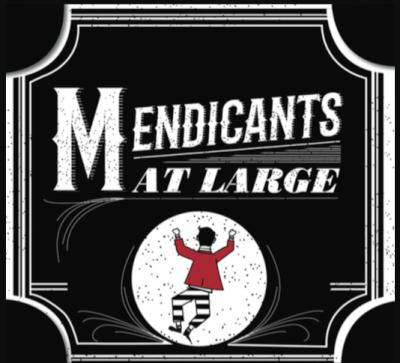 The Mendicants remain their charming, silly selves with Mendicants At Large. While their enthusiasm and camaraderie are a treat, the weak, sometimes clunky arrangements hinder their work.

Sing kicks off the arrangement issues with loud, abrasive syllables, lots of vertical chords with lots of open spaces between measures, and an extremely present 1-2-3-4 count. It's not slick or neatly textured, both of which we've come to expect for this type of cover. Butterfly's sexy lyrics don't translate to sexy enough music under this approach, and the dominance of accent marks and that jarring "jow!" doesn't help. The ballad Colder Weather allows us to hear the group's musicality through phrasing, but the arrangement is still a bit too jagged to let the listener really settle into the music and message. The Mendicants take a risk with Sky Full of Stars, slowing the tempo way down for the first minute and a half, plus adding high wailing tenors to add a feeling of pining before abruptly transitioning into a dance beat. I buy it until the very loud basement/dub-step-style music effects kick in at 1:53, making the musical arc for this single song: beautiful longing — happy dance time — monster got into the house? Continuing on, combining She Will Be Loved and With or Without You isn't as elegant as hoped for, even though it is certainly refreshing to hear a bass on a U2 lead. And the sudden shift into a heroic, triumphant ending for Yesterday (It's So Hard to Say Goodbye) is a real head scratcher. In summation, the arrangements need more editing and refinement on Mendicants At Large.

A few tracks have a stronger presentation. Domino is more successful because the original is very punchy and the Mendicants' natural singing style captures this well. Though the best-suited arrangement here is probably the wholesome and good-time Dance With Me Tonight. There's nothing wild or jarring about it — just a great groove with energetic singing. I'm ready to clap along here! If the Mendicants are looking to refine their arrangements and song choices, I'd analyze this one first, where less turned out to be a lot more. And this clever version of Runaround Sue that they present — wow! That is some genuine swagger coming through. All is certainly not lost!

I don't doubt the Mendicants are making the most of their college years. I'll just hold out hope for better arrangement crafting next time.

Goldilocks was lucky. Too hot, too cold, just right. Simple. Imagine how upsetting that story would be for her if the porridge was "not quite edible" and the bed was "almost comfortable". "Almost" and "not quite" embodies the feeling I get when I listen to Mendicants At Large, the latest album by the Stanford Mendicants. Arrangements, blend, soloists, and production — each of these elements falls just shy of the mark. The result is the audio equivalent of a jigsaw puzzle with the knobs cut from each of the pieces. It still makes a picture, but there's clearly something missing.

Yesterday (It's So Hard to Say Goodbye) deserves some recognition for the arrangement's attempt at innovation. The marching percussion rhythm and the altered chord structure certainly catch the ear. Where it falls short, and most every arrangement falls short, is through a lack of depth. Part of this is due to slow tempos, blending that doesn't quite ring, and a bottom-heavy mix, but mostly it's arrangements that don't explore beyond the surface. Sing relies heavily on block chords, leaving all kinds of empty space that could be filled with high-hats or by padded sustains. Sky Full of Stars rocks the percussion and plays with contrasting rhythms but misses moments where landing on a crunchy high chord and letting it ring would make me stand up and cheer. The one song that gets it right is Butterfly. It's rich and fully engaging.

None of the soloists are bad. In fact, they are all quite talented. The problem is, they either aren't emotionally connecting to the lyrics, or they aren't in the right key. Domino is about a third lower than it needs to be for the soloist to really let loose and shine. Colder Weather suffers from both of these issues, being too low as well as not fully connected. Dance With Me Tonight, like Butterfly, is the exception. This track exudes fun.

In the Wee Small Hours of the Morning is a wasted track. Not only does the live recording mean that the melody is completely lost at the beginning, but the song itself doesn't match anything else on the album. Having two mash-ups is also questionable.

Although this album feels like a gift without enough wrapping paper, there is an aspect of it that redeems it a great deal. These guys obviously love what they do — that comes through clearly. I really hope they keep that and just push a little harder to get the details right. I expect that will make the next album one of the greats.

The Stanford Mendicants are At Large with their latest album. This all-male group sings a wide range of styles, from gospel to pop to barbershop. The "ba daht daht dah"'s and gibberish doo wops give most of their arrangements an interesting spice.

I have both good news and bad news for Mendicants fans. Starting off with the good: the rounded choral sound of the group is there. These guys produce tight harmonies together. The arrangements are mostly easy-to-follow, chord-driven doo-wops that don't require a lot of studio magic and sorcery.

However, the overall sound production, song pitch, and song innovation are a few of the primary issues here. Some mashups work while some do not. Some solos are executed well while some aren't. I think the best arrangement in this album is Butterfly and it also has a well-performed performance by the soloist Jeff Bennett. Colder Weather is not a standout as it fails to provide the ladder to build a climactic ending to the song. Domino has lost its "party" feel, being transposed just an octave lower from the original.

The Mendicants never fail to entertain me with the fun doo wops, though (Dance With Me Tonight). They use silly Motown-style background vocals in their arrangements without sounding corny; Runaround Sue (Remix) is good Exhibit A, although I would still prefer to listen to their original version from their old 1992 album Feline Casanova. She Will Be Loved/With or Without You works quite well mashed up. Putting a barbershop touch in their cover songs has long been the brand of The Stanford Mendicants. It turns out to be an advantage since they have proven to their audience, as well as to their fans, that they can turn any music into a cappella with their Mendicants flavor.

The live ending bonus track is a bit pitchy. When considering the inclusion of live performances in an album, groups must consider pitch cohesiveness. Live performances cannot stand next to studio recordings when pitch is a little shaky. The song doesn't end the album with a blast, so that pulled down my rating. And if you care about perfect pitch, you will likely cringe on some oddly-transposed covers. Tricky arrangement decisions affect the musicality, and the Mendicants tend to lose the intended emotional impact of the songs with these choices.

With Mendicants At Large, the Stanford Mendicants continue their Motown-infused a cappella recipe. Although the album as a whole is not a complete success, there are still a few nuggets here that are worth listening to.

Order Mendicants At Large through the group's website, or listen to it online with iTunes or Spotify!