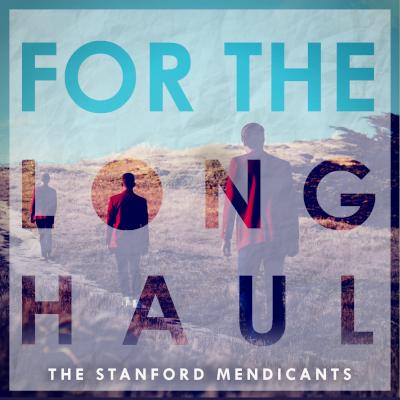 The story here is a familiar one. An a cappella group very much wants to demonstrate that its singers are lovable, and funny, and sensitive, and really quite amazing, so the a cappella group digs into a bit of everything across genres and styles for a crowd-pleasing romp. Sometimes this method works, delivering us a product reminiscent of the best mixtapes we grew up with. In the case of For the Long Haul, it's a very up and down ride of nice successes and clear strike-outs.

The Mendicants choose to execute their comedy through campy caricature, having everyone exaggerate the silly acting. Small doses of this is about all audiences can take in a recorded medium (there's much more elbow room on stage for antics in a live setting). In addition to credibility, musicianship also suffers when groups get too wacky. Have fun, but hit your notes, and use good breath support, and listen to each other for a keen blend, and everything else you'd do if you were singing a ballad, frankly. Pieces that really didn't hit the mark in this campy style include Kiss the Sky (the chorus really pulls down the piece), Zoot Suit Riot (with long vowels tending to dip flat), and the entirety of 1985. Though not a comedic piece, Runaway Baby's choruses are also a miss due to the exaggeration over tight musicianship.

But then, the nice surprises! Who could predict that another spin of River and Bottom of the River (and in this case, a mashup of both) could sound so freshly intense? I really enjoy the arrangement. How about the gorgeous lead on Control? The way Alexander Ronneburg sustains growing notes is just right. Lastly, I also wouldn't expect to call out Holding Out for a Hero for a huzzah, but my goodness the vocal gymnastics from the soloist and the steady framework around him is very nice. And oldie but goodie, for sure.

The Mendicants try to anchor us in contemporary a cappella by the end of the release with 715 CRΣΣKS and Exit Music (For a Film). Both are fine, both belong on a mixtape, but neither is as strong as it could be.

As such, I'd certainly recommend a tighter focus for the Mendicants. Any group can certainly sing a bunch of this, that, and the other thing, but to know one's strengths, and to actively focus on improving weak musicianship areas, will make for a much stronger record.

After three long years, The Stanford Mendicants have released a full-length album with a list of songs picked from different decades. My question is, why did it take so long for The Mendicants to brew this gem?

As one of the groups with a long history of a cappella recordings, I have come to the assumption that the Mendicants sometimes just throw songs on an album as a college memento. I want the Mendicants to step up their game and really produce a great compilation. What keeps them from doing so? I guess it's primarily because the group's arrangements have stayed in the era from whence the group came to be. Innovation is how anyone survives in the music business. And seeing the previous RARB scores of the Mendicants, statistics show that this group just consistently stays the same. This album, however, is an exception to the stagnation! For the Long Haul is actually a decent step-up from the group's previous releases.

Kiss the Sky, as an album opener, is a statement: the Mendicants intend to give a good performance on this album. Alex Feldman's tessitura on the chosen key is indeed quite appropriate. Transposing the song to a lower key is a wise decision because Jason Derulo's head voice is his own, and our boys from Stanford would want to keep this song on a good path rather than sound like a chipmunk trying. The next track, River / Bottom of the River, is a serious drop in caliber from the opener. The background singers seem to have lost energy as it comes and goes like a wave. When covering material that requires conviction and attitude, the entire group should exude that level of energy, not just the soloist. The other mashup on the album, Stacy's Mom / 1985, is a time travel experience — I enjoy the musicality of the group as the impeccable fusion of the songs makes it a fresh track.

There's not a single striking soloist performance on this release, but this doesn't mean any are bad. The songs are just transposed to a key that are too safe for the soloists. Holding Out for a Hero, for example, has a chord progression that could have been used to draw emotions from the listener, but the key chosen is too safe.

The songs that really capture my attention are Control, originally performed by Halsey; Exit Music (For a Film) by Radiohead; and 715 CRΣΣKS. This could be the direction where the Mendicants should go from this point forward. Although, I'm also not opposed to the inclusion of a couple of songs that have the signature Mendicants cutesy doo-wop singing, which is heard in Valerie, Runaway Baby, God Only Knows, and Zoot Suit Riot — old habits just don't break easily.

For the Long Haul is not a bad album. The overall quality of the recording is a major upgrade compared to the group's previous album, Mendicants At Large. One can't go wrong with the production work of Danny Ozment, and Bill Hare's mixing and mastering. But it's never too late to keep going in the right direction. The correct mindset is to use the right material and choose the best soloist to represent it, and then create those beautiful moments that pop up on your release. For now, I just want to celebrate a job well done by this group who stepped out of its comfort zone — having notable soloists can be the goal next time.

I struggle to understand the Stanford Medicants' identity as a group, as well as the intended effect behind For the Long Haul, even after listening to this album several times. The Medicants have a solid vocal model and core sound, but several issues in the execution and detail work hold back what could have been an extremely entertaining project.

The first thing that sticks out to me is production work. The background voices sound as if they were all recorded in a single room with very little editing. This isn't a bad thing on its own — strong live or unedited recordings often have a raw, authentic quality to them that tightly produced and mixed recordings don't have. This shines in a few places on this album, such as the "RIOT!" echoes in Zoot Suit Riot, and the unfiltered intensity on Control and Exit Music (For a Film).

The problem is that this does not come across as a consistent, deliberate choice. Vocal percussion is mixed completely differently from everything else. Solo recordings often have strangely seamless edits that don't match the rest of the live background. Balance in the background voices is inconsistent and is usually too mid-heavy, even in tenor- or bass-featured musical moments. Most importantly, however, the background work isn't tight enough in tuning and sync to make the best use of the unfiltered sound. Several times, such as during the final chorus of Zoot Suit Riot and almost the entirety of 715 CRΣΣKS, musical choices are obscured by incredibly faulty execution.

Outside of execution issues, many musical choices also are questionable in design. Stacy's Mom / 1985 is a great mashup idea in many ways, but the arrangement doesn't allow each song to breathe on its on before making them collide. God Only Knows is one of the most consistently well-produced and executed songs on the album, but it strikes a weird blend of vocal jazz, barbershop, and original song influence without ever fully reaching coherence. The Medicants incorporate a more classical vocal model in Exit Music (For A Film), which works surprisingly well, but too many other percussion and production elements don't match that vocal model choice.

The best solo work on For the Long Haul has obvious intention behind it. Stefan Swaans on Zoot Suit Riot, for example, has absolute commitment to the vibe of the song. Alexander Ronneburg also makes Control entirely his own and bends it to his strengths, reinventing the lyric accordingly. On the other hand, other solos feel tentative and held back, especially compared to these two memorable ones.

What ties a lot of these issues together, and the areas future growth, are intention and coherence. Every song must stand on its own, not just as an a cappella track but as a song, period. All production choices, vocal model choices, and musical flair must all feed into this intention. Otherwise, it becomes messy.

For the Long Haul's baseline isn't at all bad — I enjoyed a lot out of my listens of this album. When there's so much missed potential, however, it's easy for me to write a lot about that room for growth. I'd love to see the Medicants focus their future efforts on a project with very clear focus and intention, because they definitely have the tools to pull it off.

For the Long Haul streams on Spotify.