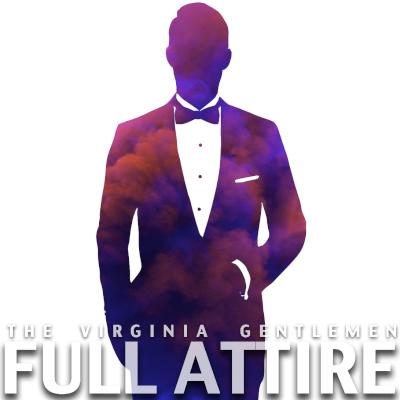 Full Attire is largely one of those completely adequate, nothing-wrong-here albums. Nothing is clunky. Nothing is sour. But nothing is refreshingly creative, either.

However, that's all a compliment, because there were certainly clunky and sour aspects on the Gentlemen's prior release, Guys in Ties. The last round of arranging had lots of sticky bits, but here, it all functions well for both a modern a cappella sound and this particular make-up of Gentlemen. One of the arrangements, Comes and Goes (In Waves) by artist Greg Laswell, really nails the song's development and growth through the layered arranging, especially the smart use of doubling the solo line through another part when intensity is needed. It's also unique to hear a warm bass (Joseph Fackler) get a lead on a tender ballad that could have easily been pegged to some manner of soaring tenor instead. It was a new song for me and one that I'm now addicted to. I love the decisions made for Comes and Goes (In Waves), elegantly delivered by the whole group and arranged by Ian Yanusko.

Here's another hit: Give Me Love. As the song starts, it sounds immediately different from the rest of Full Attire, given a deep and swirling soundscape from engineer James Gammon who really adds a sonic bow tie to all of Full Attire. All of the a cappella feels are found in Give Me Love, skillfully delivered by Micah Iverson, who is so convincing in his solo interpretation that it feels like we're overhearing an important confession. That's power.

There's two more delights to bring up. The first: Cry Me A River is not the Justin Timberlake version that you'd expect from an all-male collegiate group, but rather the jazzy '50s version performed by Ella Fitzgerald that sounds like it belongs in a spy movie. What a pleasant surprise! The second bit of happiness comes in the choruses of Take It Easy. The world over is familiar with this song, like it's somehow a part of everyone's growing-up story regardless of their age, but the tender high notes in the chorus here make it feel a little sweeter, and somehow a little newer, like the story continues.

We're still missing the songwriter credits in the liners. But all in all, I think the Virginia Gentlemen are doing just fine.

Full Attire is the latest from the Virginia Gentlemen, and in keeping with its title, the album is presented with a full set of sheen and polish. The songs are well chosen and well sung, creating a product that ultimately goes down smoothly.

Full Attire begins with Ariana Grande's Problem, but not in the way you'd expect. The Gentlemen nixed the saucy brash sax intro in favor of a more laid-back, cool approach. It's a nice warm-up, subtly injecting style while retaining the danceable pop flavorings of the original.

The second song, Soldier, is solid particularly in the moments where there is a more choral wall of sound. The solo on this track is nicely done, but could've been better if the soloist did less mirroring of the original performer and let his own voice take command of the song.

The Gentlemen's cover of Mirrors is nicely arranged, with a great mix of textures to give the song a spread of layers to create depth for the ear. While I appreciate how neat and tidy the arrangement is executed, the track has an almost metronomic and sterile quality to it. The majority of the track feels like it's moving just a click too fast, and as a result there aren't too many spaces for the soloist to dig in and create more dynamic contrast. It isn't until towards the end, when some of the driving rhythmic "doo doo"s are removed (creating the necessary space), that we hear the soloist unload the emotive dynamics that could have been sprinkled throughout. Still, Mirrors is a likely favorite for listeners with its tight blend and catchy background vocals.

Give Me Love is a pleasant surprise. There isn't anything all that substantially different from the Ed Sheeran version, but it's all performed and produced in a way that gives the song a new life for the listener. The vocal percussion is crisp, punchy, and yet somehow, subtle and complementary at the same time. The dynamics and energy are very focused from the beginning and establish a clear intent to take the song in a particular direction, building out of quietness to the eventual dramatic ending. The reverb and effects on the claps and stomps are also a nice touch.

Cry Me A River might be the best the song on Full Attire. While I'm not usually a fan of over-the-top Big Band covers of songs like these, the Gentlemen succeeded in winning me over on this one. Everything, from the vocal energy and intensity, clever sound production and effects, comes together quite excellently.

My verdict for Full Attire is a solid "4". Crisp, clean, and well-delivered.

The Virginia Gentlemen certainly come out swinging in Full Attire. They go for big hits with big energy, but the overall product averages out to something middling. In trying to slam you in the face with their enthusiasm, the Gentlemen undersell their high points and overemphasize their weaknesses.

Syllables are the biggest culprit for drawing negative attention, specifically consonants. While they've definitely expanded their musical choices since Guys in Ties, the constant hard "doo"s, "doom"s, "doh"s, and "dah"s become tired before Problem even enters its stride, and that's just the first two minutes of the album. When Soldier starts, you are already hoping for a change, but just get more of the heavy, unphrased "dmm"s from the basses and more "doo"s from the upper voices that carry straight through the album, almost ruining otherwise good songs like Give Me Love, or great ones like Demons. You think you're getting a break with the hard "j" consonant occasionally, but it's just the same problem in a different coat.

Which brings us to the fault of this album: for every great execution, something holds the product back. Yo Han Hong has an amazing presence in his cover of Josh Groban's Brave, with stellar vowels, phrasing, and tone quality ... absolutely incredible. This is, however, immediately offset by the unshaped and uncaring rendition of Take It Easy that follows. John Dreyzehner was born to sing Demons, and it's sublime, but then rather than closing with that art, the jarring Wagon Wheel was chosen instead, leaving a unpleasant taste in your mouth.

On the plus side, the musical choices made in the arrangements are occasionally refreshing. Rather than rehash the same cut of Mirrors that's been covered to death, Hong and Keith Wilson move the never-covered third verse to the front, leading you in comfortably and pleasantly, adding a nice sparkle. This is, of course, only after forcing you to sit through the overly clean and pared down Soldier. Anyone covering a gospel-style Gavin DeGraw hit has their work cut out for them, but sanitizing the chords in the back half (the choir's "nah nah"s) by matching across the same overly bright and almost nasal vowel makes it difficult to take seriously. Trimming out any tension or crunching chords in an area that should be full of grit and feeling is a cardinal sin in my book.

What else? Oh, the usual: credit your percussionists, composers/contributors, harmonies, etc. It can be especially confusing when the credit is listed as "OPB Ella Fitzgerald", yet what we get is a transcription of the Michael Bublé cover. I could go on for days about the wrongdoing of leaving percussionists out of your credits; every group needs to stop doing this. The drummers are doing as much as your soloists, and deserve their recognition. Finally, by adding in an "extra" at the very end of your album in the form of an uncomfortable voicemail greeting, the earlier diamonds in the rough become easily forgotten.

This album is available on iTunes and from the group's online store.