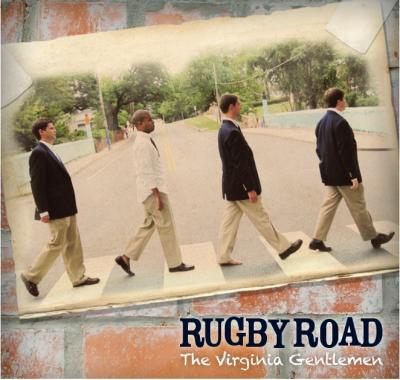 Mind you, that's not just a flippant, random comment. It's relevant to Rugby Road, which features tracks from the '06-'07 and '09-'10 incarnations of the Gents, and save for an upgrade to James Gammon as producer of seven tracks vs. Chris Doermann's five, there's not a great deal of difference between the overall product created by both ensembles.

It's been nine years since I last reviewed an album from these guys, and their last work, Turning, showed a good deal of promise. It was thus all the more disappointing to discover that a group this experienced still seems to be a few years behind the collegiate a cappella curve in its choice of repertoire, arrangements, energy levels, and overall sound.

OK, so maybe Hide and Seek was fresh and new when it was first recorded by the group (no explicit note is included to advise which group recorded which track, but I'm choosing to believe this was '06-'07). I'll give them a pass here, though this arrangement does little to innovate or improve on others we've all heard before. But a bland if jaunty opener of Brandy (You're a Fine Girl), featuring a schmaltzy solo and a whistly vp snare, ratchets up the cheesiness factor to "10" and it rarely budges from there. A too slow, too disco-ey, limp Bad Romance follows. Then we hit the first of the tracks that were recorded by Doermann, who did a decent job by 2006 standards but five years later, the sound quality and tuning gaffes are far more troublesome and less excusable. Scarborough Fair and Hallelujah also do nothing to help the group escape its tendency towards a more formal glee-club sound — the former is pretty good, albeit with crescendos that get a bit too loud, and the latter is OK but shows little to no development or build. It starts overly busy in the arrangement and pretty much stays there.

There is some promise here, however fleeting it may be. House of the Rising Sun does a nice job creating its blues/funk feel at the top, and the palpable energy in the solo triumphs over an arrangement that ends with an instrumental section that doesn't quite work. Similar thoughts can be offered about Proud Mary, which builds terrific anticipation in the first 2:30 (the slow section), only to be a pretty major letdown when the uptempo section kicks in with kitschy word backgrounds and unison power chords that undermine what deserves to be a much more percussive, punchy arrangement. Still, the energy of the two soloists once agains wins the day and keeps things interesting, notwithstanding the bland accompaniment.

Sometimes, in fact a lot of times, groups use multiple producers on an album, and it's mostly if not totally unnoticeable. If the producers are mixing with the best tools and know the modern a cappella scene, it's hard to negatively impact an album by using a few studios. Actually, multiple producers who are on their game usually enhance the total effect of an album with their individual contributions of flair and innovation.

The Virginia Gentlemen went with Virginia Arts Recording and James Gammon Productions for Rugby Road. I'm sure this is due to the big span of time needed to create Rugby Road, which was recorded from 2006-2010; they must have started with VAR and ended with JGP. Unfortunately, having two studios on Rugby Road really sank its potential, big time. Tracks which received a score of "3" or lower are from the Virginia Arts Recording studio, while the James Gammon Productions tracks got the higher numbers. The former gives the listener a cloudy sound, like an old record rescued from a garage sale that you hope still plays all right. The latter: crystal clear, sizzling, engaging. The time spread itself probably didn't do the group any favors, either; technology improves so quickly now.

The production discrepancies between the two studios is especially frustrating, because one can hear the potential waiting to burst through on the weaker tracks. Rugby Road could have been Super Awesome, No Speed Limit, No Traffic Road. Oh, to hear Cannonball, with outstanding soloist Todd Huguenor, mixed to emotional perfection. Oh, to hear more of the full-of-character bass that Gammon pulled out on his tracks. And oh, to hear the quite unacceptable vp given proper care on Paperback Writer.

But there's a vocal discrepancy, too. The tracks from VAR have much weaker intonation, with Over My Head (Cable Car) and These Walls sounding particularly flat. This gives us a behind-the-curtain view that colors the group in paler shades; a seasoned a cappella producer can make these guys sound hot, but can they sound hot alone? It's hard to gauge the group's natural talent when the mistakes are so framed from VAR. It's also hard to know how much the group has improved over these last years with the talent of James Gammon tidying everything up, but perhaps a lot.

So, it appears The Virginia Gentlemen have a straightforward way to improve the consistency of their next release: shorten the recording timeframe and use a good a cappella studio. Easy enough, right?

The Virginia Gentlemen are the oldest a cappella group at the University of Virginia with the deepest roots in tradition, having grown out of the Virginia Glee Club (of which, in the interest of disclosure, I am an alumnus) in the 1950s. And there are vestiges of that Glee Club style on Rugby Road, the group's latest.

Five of the twelve tracks on Rugby Road were produced by Chris Doermann rather than James Gammon, and the significant difference in quality indicates that Gammon was the better choice. Doermann's tracks tend more toward an old-school, live recording sound at least ten years behind the rest of the album. In general (with Over My Head (Cable Car) the worst offender), the backs are muddy, the percussion is weak and underproduced, and the whole track is awash in an overabundance of reverb. The best among these is Hide and Seek, largely because the reverb-y, percussionless sound the track wants is the closest to Doermann's aesthetic, but it is done no favors here and doesn't come close to most of the Gammon tracks.

That said, some of Gammon's mixes sound almost too clean. Crisp diction and open vowels give all the arrangements a vocal feel, rather than instrumental imitation. This combines with highly sequenced percussion and a lack-of-effects processing to create an overall sound that feels almost choral at points, punchy but often formal and regimented. The clean sound lends itself to Brandy (You're a Fine Girl) but feels odd next to grittier, more expressive solos like Bad Romance or House of the Rising Sun. Proud Mary, with the Sil'hooettes, features credible Ike and Tina Turner channeling from Tre Tennyson and particularly Happiness Chijoke (a former CARA winner), but the backs feel more like a machine than a band, especially when the song goes uptempo. I find myself wishing they could recapture some of the heart evident on the chorus of the otherwise lackluster These Walls.

The best two numbers on the album, Scarborough Fair and House of the Rising Sun, have little in common other than their stylistic divergence from the pop that so often forms the bread and butter of college albums. The former allows those same choral chops, open vocals, and impeccable diction to shine on an arrangement by John Anderson that rises and falls gracefully while maintaining a strong sense of pulse. The latter succeeds largely on Andrew Fish's solo and a really nice breakdown in the bridge but would have been even better if I weren't repeatedly distracted by the basses singing "din-do-ah" in an overly obtrusive loop.

The Virginia Gentlemen are a group of fine voices with much in their favor, and they even have a distinctive sound in melding some of their choral roots with a more contemporary repertoire. But Rugby Road sounds like they haven't quite found their studio sound, and I look forward to the result when their recordings can truly show The Virginia Gentlemen off in a deserving manner.