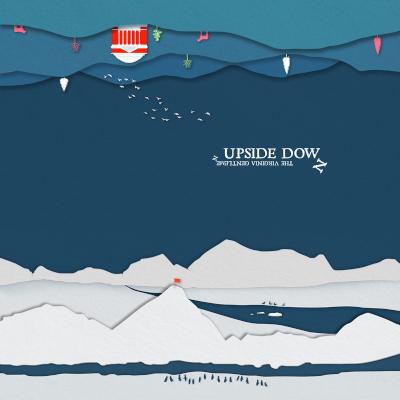 Here are my opening remarks for the Virginia Gentlemen's prior release, Full Attire:

"Full Attire is largely one of those completely adequate, nothing-wrong-here albums. Nothing is clunky. Nothing is sour. But nothing is refreshingly creative, either."

Maybe you can guess where I'm going with this; Upside Down rings the same for me. This is a pleasant but plain release, and I don't wish to see more studio effects added for aural interest. I'd prefer to hear more risks taken in the arrangements and source material.

Continuing the group's preference of covering The History of Modern Music in one album, we open with the 1930s jazz standard Sing Sing Sing performed in its popular Big Band instrumentation style sans lyrics. It's pretty punchy and certainly deserving of opening the album. But if you like cohesive-sounding records, Upside Down isn't for you, as you'll also tour through Unchained Melody and a Justin Bieber hit, among other iconic stops on your journey. Still, in an a cappella era where we're heavy on EPs and singles, a full-length collegiate album — with all the work and funding that goes into it — is really appreciated.

The next three songs all sound just fine but lack compelling leads, and that really matters. There is lovely voice leading in the scores, and space for each vocal part to build and flourish as the works go on (especially in Gone in the Morning), but the impact isn't very high. Matters are becoming dangerous for Upside Down until Adele's When We Were Young uncurls in your speakers. It's just gorgeous, with an epic, sweeping sound and pleading soloist. It'll be the track you repeat after your first listen, eager to experience the beauty and pain all over again.

Back to Unchained Melody: this is a pretty square and faithful rendition, though there are some fresh chord modulations to make it a hint darker, and a little doo-wop feel to set the table for this timeless song. The problem is, I was beyond certain I was in for a snazzy reinterpretation — something distinctly contemporary a cappella — because who would touch Unchained Melody without adding some serious salt and pepper? It's not here, and it was the biggest opportunity for creativity on Upside Down.

The biggest step forward for breaking new ground comes in the form of Guillotine / All Time Low, although other a cappella groups are mashing up these two hits too, so it won't sound new for long. But it's no wonder this combination is happening; these translate so strongly to a cappella with their focus on rhythmic play and earworm melodies, and the Virginia Gentlemen make this track sonically interesting by layering the two songs into one new idea. Hopefully it's the beginning of more sophisticated ventures for this seasoned group.

As an album, Upside Down isn't particularly memorable, though it's not without its peaks. Give the stronger tracks a spin and see how you respond.

The story of the Virginia Gentlemen's Upside Down is one that starts off seemingly slow. The first few songs (Sing Sing Sing, Gone in the Morning, Everglow) are good, but nothing in them really snags my attention firmly. Sing Sing Sing in particular, while a neat throwback to the big band sound, just feels like an odd intro in relation to vibes radiating from the rest of the album.

Right around When We Were Young, there comes a noticeable shift. The voices are much more locked-in and blended. The dynamics help the backing vocals become more visual and you're able "see" and feel the columns of sound rising together with the soloist. The arrangement isn't overly complex, but it's the commitment by the singers that pushes it over the top. What I especially like about this song is how the soloist really pays attention to the lyrics and adds the right touch of grit and emphasis to each word, most notably on "reckless" and "mad".

The next song, Love Never Felt So Good, is a great choice to keep the energy flowing, and while it's a pretty arrangement, it doesn't quite hit as strongly. The notes are clean and crisp sounding, but something about the delivery stops me from being as engrossed as I'd have liked. Many moments of the song (I think perhaps delivered by the tenors) feel fleeting, as though we're merely tickled by the notes and never completely wrapped in an embrace. It's an understandably tall order anytime anyone covers Michael, but I feel that a little more indulgence, a little more groove, would've gone a long way on this one.

Unchained Melody is my surprise favorite on the album. The Gentlemen really excel in demonstrating their sensibilities and IQ for the genre on this particular track. The soloist's tone is a remarkable fit and I can really appreciate his attention to detail, carefully picking his spots to embellish and indulge, and when to be quiet and softer. The backing vocals are supportive and are really engaged with the soloist. Right around 2:30-3:00 is probably most indicative of this, as the song transitions from more tender subtleties into a firmer, brazen finish.

In all, I am pleasantly surprised by what I stumbled upon in the latest from the Virginia Gentlemen. It's not an album that necessarily turns the college acapella scheme on its head, but it's got guts. As the album matures and progresses into Guillotine and Underground it's strong emotive performances from soloists and backing vocals that elevate this piece into the higher end of "4"s for me. Upside Down is an experience perhaps best described as "slow-burner", gradually building as it progresses, but it's one that should be more than satisfying for a cappella fans.

I'd like to start off with some huge kudos to the Virginia Gentlemen. First of all, thank you for revising your crediting liners — using "Written By" in conjunction with "OPB" makes the basis of your covers and the inspiration chosen clear. In addition, going even further from Guys in Ties, thank you for expanding your repetoire to include more wholly uncommon songs. I almost never see Newton Faulkner included in a collegiate album, which is frankly criminal. Add in Judith Hill and Cody Fry covers, and we're on a whole different plane of existence from your average product.

The diversity of tracks alone makes this a worthwhile pickup, but there are some must-haves on the back half of this album. Israel Vaughan tackles the aforementioned Judith Hill with rolling ease — "5". Kevin Saucedo-Broach is not only spiritually possessed by Dan Smith of Bastille, he's driven to push his falsetto farther than Smith can, without losing control — "5". Alex Rigby's evocative Wild Mountain Thyme keys into the folk roots of the song while keeping it in a modern style — "5".

I'll also take a minute to praise arranger Nate Oberholtzer. While he may have been inspired by the Ed Sheeran version of Wild Mountain Thyme, what he's created is an incredible fusion of the styles of Vaughan Williams and Chilchot. The timing of the progression, the modulation interlude, the syllables and lyrics — this is what it means to make a song your own. If you're considering becoming a vocal arranger, this track is a must-listen. Oblivion's arranger Sam Roller also deserves some applause for his unorthodox usage of "hem" as a syllable, as well as the beautiful cluster chord the closing expands into.

Indeed, almost half of this album sets a high bar for what collegiate a cappella should accomplish, but runs into too many classic pitfalls to keep it from being the torch-bearer. It's frustrating to have arrangements as purposeful as Wild Mountain Thyme or Oblivion when the rest of the arrangements are purely transcriptive, with uninspired syllables abounding. In particular, I'm not a huge fan of the opener, Sing Sing Sing. The choice to have it be an instrumental cover only isn't wrong by itself, but it showcases nothing if you don't take liberties with the harmonies or take risks with the syllables. The Gentlemen might have been better served covering the version with lyrics to showcase another soloist.

Production is your traditional James Gammon fare (which is to say, well done), but that puts the group's flaws on display. An overabundace of reverb on a soloist's voice tells me plainly that they can't hit the high notes, or can't sustain the money note at the climax. Especially up against the amazing work of the soloists on the back half, tracks like Death of a Bachelor stick out dramatically.

Huge leaps and bounds forward on Upside Down, guys. I have high expectations for your next product.

This album can be ordered online at thevirginiagentlemen.com and streamed on Spotify.