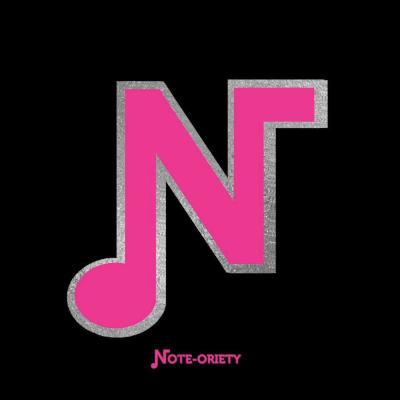 With this release, Note-Oriety has laid claim to being one of the best female collegiate a cappella groups in the US, and one of the best collegiate groups period. These women from James Madison University deliver energy, sass, passion, heartbreak, pathos, sex, frustration, anger, power and more on their self-titled album. Backed by stellar production values, Note-Oriety is the album to have if you need soul-bearing performances using some amazing voices.

Solo artist Lilli Lewis has used the term "ugly singing" to describe how to get to the emotional center of a song. Basically, it's the quality of not being afraid to bare your soul when delivering a song, instead of only wanting it to sound pretty and pleasing to the ear. Ugly singing is all over Note-Oriety as melodic lines and backing vocals alike are performed with a gusto and conviction that put smile after smile on my face. Not since the early recordings of Tufts University's Essence has the rawness of emotion been so beautiful.

Producer James Gammon must have had an amazing time in the studio recording this. It seems as if performer after performer got to the mic and said: "This is me, this is who I am, this is what I do, love me or leave me, I can't do it for you anymore." I would have been right there in the studio beside him giving popcorn snaps and saying: "Yassss", "Boots" and "She peed" after every lady finished her recording session. I've said before that Gammon is the best producer out there for female artists. This album as well as the recent Lady Jaye release FLUX is further proof that this man is brilliant and gifted.

There are superlatives aplenty on the album. The fantastic singing enhances great arrangements, which are then mixed to near perfection as the final product. Bang Bang is probably the best track on the album, with everything coalescing into a great product. My sentimental favorite is Not Ready to Make Nice even though it doesn't have quite enough bite to make it unforgettable. And the duo of Zoe-Elizabeth McCray and Michelle Magee on both Stay/What Now and the first sections of Pretty Hurts are the epitome of that ugly singing commitment. Magee's longing and desperation on the chorus of What Now where she literally says "I just want to scream" and "I just want to shout" and THEN DOES IT. Come on people, this is how you perform and indicate that you are an artist. Magee replicates that conviction just a track later on the upper parts of Pretty Hurts. I mean, I have no more words.

And that's also the truth. I can't really say anything else about this album. Some of the tracks are "less" stellar than others, but I'd rather listen to those "shoddy" tracks than most of the a cappella that I've heard this year. So there's that. Oh, wait, the obligatory "the liner notes aren't good" — a sleeved jacket with with no songwriter or production credits is a throwback to the days of fake licensing. We can do better than that — at least add a link to a full set of liner notes on your website if you can't afford to put the information on your CD case.

Note-Oriety's self-titled album is easy on the ears but doesn't offer a lot of surprises. The repertoire is fairly standard for all-female groups (Beyoncé, Rihanna, Carrie Underwood, Kimbra, and the Dixie Chicks), and Note-Oriety doesn't revolutionize any of the songs here.

Some of the selections are still beautifully well-sung: Blown Away is haunting, and the breathy wind effects add a chilling ambiance. Soloist Rachel Belleman has a gorgeous range, especially the rich low notes during the verses. The dynamics on Lies are beautiful; it might just be the best song on the album. The harmonies on Pretty Hurts are outstanding; the combination of Zoe-Elizabeth McCray, Michelle Magee, and Rachel Belleman is gorgeous. There are times when these three truly sound like one voice together.

The vocal percussion is on-point throughout the album. Vocal percussion isn't credited in the liner notes, so it's not clear whether this is a single percussionist or multiple percussionists across the album. Either way, though, the percussion avoids the pitfalls that usually ruin all-female drumming; the vp on A Little Party Never Killed Nobody and Somethin' Bad in particular sound great. It's a little over-processed at times, but that's far preferable to the shallow and tinny sound of most all-female vp. (Relatedly, there are no recording or production credits on Note-Oriety.)

Even with such standout moments, Note-Oriety is more average than great. The soloists on Bang Bang just don't gel with one another; the medley of Stay/What Now doesn't really flow together; and Not Ready to Make Nice feels too slow, and the coloratura soprano line in the final chorus is really distracting.

Note-Oriety has some solid arrangements, and the singers blend well together for the most part. Overall, though, I don't truly get a sense of the group's personality or point of view: I know these ladies have the vocal talent to blow me away, but they haven't channeled that into a truly outstanding performance yet. Note-Oriety's self-titled album is easy to listen to but doesn't set itself apart from other collegiate all-female a cappella.

One thing that I really like on Note-Oriety's latest album is the obvious camaraderie between these ladies. The self-titled album does seem to focus on presenting Note-Oriety, "the group", to listeners. Pretty Hurts, for example, features three lead singers; their voices layer over and wind around each other as they sing about society's unfair expectations of women. A number of the other tracks similarly feature shared solos or harmonies, giving a nice overview of this group of women. The album then ends with the group singing My Heart With You by The Rescues in unison, which is a nice way to tie the entire thing together.

One thing that I dislike on Note-Oriety is how let down I was after the opening track. To put a more positive spin here: this album is worth buying for Bang Bang alone. There are some other solid numbers down the line (Pretty Hurts, Stay/What Now, and A Little Party Never Killed Nobody are standouts), but nothing rises quite to the same level as the opener. I might have saved Bang Bang for later in the album, only because it set my expectations unrealistically high for what was to come.

Bang Bang is not just upbeat and fun, it also easily avoids many of the pitfalls that female groups can run into. It has dynamics, creates range and space in the backgrounds, and makes great use of everyone in the group without sounding limited or screechy. On my first listen through, I was pumped! Unfortunately, it's followed by one of the weaker tracks on the album, Lies, which pulls a near 180 on almost all of those same points.

Overall, Note-Oriety has few missteps. The group presents a pretty standard collection of contemporary hits. My biggest specific complaint is the sudden increase in tempo midway through Blown Away, which makes the rest of the song feel unnecessarily rushed. The most egregious thing I noticed comes from the liner notes. Songs are not just mistakenly credited to performers (something we commonly see from collegiate groups), but aren't credited to anyone at all.

I encourage the group to consider why some tracks here work better than others. Arrangements are a part of it — group director Zoe McCray arranged Bang Bang, Pretty Hurts, and co-arranged Stay/What Now, while A Little Party Never Killed Nobody was provided by Shams Ahmed — but there's also a sense of ownership and intention to these songs that is lacking elsewhere on the album. I think a focus on capturing that more consistently will go a long way in the group's future recordings.