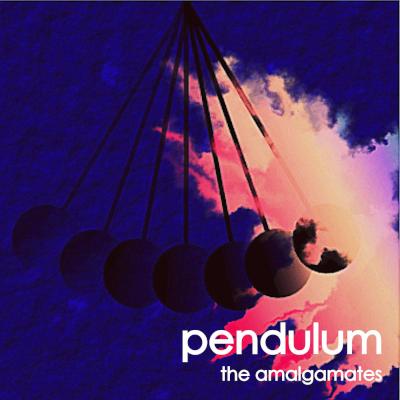 The voices on this album! Pendulum bowled me over on the first two tracks, and the rest of the album kept me tuned in to see what would happen next.

The Amalgamates made a smart move by putting their strongest stuff up front. Love Runs Out packs a wallop on every level. Tammara Gary nails the lead vocal, while the group rallies behind her with energy, verve, and a relentless forward momentum. This level of cohesion came and went over the course of the album, depending on strength of the source materlal and how much the group could rally behind it.

I will now take a moment to gush about Ryan Johnson, the soloist on C'mon Talk. He is the voice I have always wanted on this song. I've already got two other a cappella versions, one adorably Southern, one winningly Scandinavian, and I like them both. This version is the best, though. Ryan's voice provides the chemistry that takes a song from quite good to really great. Especially now that I live overseas, I crave the perfectly native intonation that's missing in so much of the Americaphile outside world, including the original Bernhoft recording. So this track makes me especially happy.

Other highlights are Chasing Twisters and the album-closing I Bet My Life, the song that does the most to recapture the irrepressibility of the disc openers. I really enjoy the contrast between the calmer verses and the pop-out choruses. The arrangement (by former RARB reviewer Alex Green, and Alexander Koutzoukis) is full of interesting textures and rhythmic accents that also win me over. Also, I am a sucker for groove and texture. From the handclaps on Love Runs Out to the whistling on Chasing Twisters, I appreciate the variety of sounds and pulses that the Amalgamates are able to deploy.

There aren't any lemons on this disc. Take Me to Church loses me a little with its out-of-tempo — though excellently executed — solo melismas. Likewise, Up in Flames uses the same percussion-only cold open as Love Runs Out, but it's not as good of a song. I find What Now to be too sweet — after all this energy I'm not really in the right mood for it. On the plus side, The One That Got Away is fun in a Pat Benatar-power ballad way, and You and Me is great as a duet. (I love duets, pop music doesn't have nearly enough.)

I will listen to my favorite songs from this album regularly, and I'd recommend the whole thing to fans of pop music and stellar singing. The Pendulum swings in our favor.

The Tufts Amalgamates have set high expectations for their music with the quality of their last few albums. The co-ed group's latest release, Pendulum, is just as easy on the ears as the group's previous recordings: these eleven songs have the studio shimmer, energy, and powerhouse solos that the 'Mates have established as their trademark sound.

Continuing in the 'Mates tradition, Pendulum has some serious high moments: Love Runs Out with its attention-grabbing dynamics, Take Me to Church with the stunning ripples in its arrangement, and Up in Flames with its watercolor backs are all memorable performances. The One That Got Away is probably the album's standout, thanks to Isabelle Vrod's sultry lead and Mallory Feldman's dramatic, engaging arrangement. Speaking of Feldman, she sings the hell out of What Now; Rihanna should listen and take notes.

Beyond the album's highs, there's nothing especially wrong with the rest of these songs — they just feel less dynamic than we've come to expect from the 'Mates. C'mon Talk is a bit repetitive, Another Way to Die / Skyfall doesn't really make sense as a medley, and the sing-along/shout-along choruses on I Bet My Life are grating on the ears. But these less-memorable songs are still exceptionally well-sung, well-recorded, and enjoyable to listen to; even the 'Mates at their "worst" still sounds significantly better than the average collegiate a cappella recording.

Don't get me wrong: Pendulum is still really, really, really good. It's just not great. Part of this is song choice and interpretation; for the most part, there aren't a lot of surprises in the presentation or selection of these songs. Part of it is repetition; some of these songs start to sound a little same-y both within the song and as a collective whole. Eliminating that same-ness will do a lot towards keeping a listener's full attention across the whole album and achieving "wow!" moments on every single song. The 'Mates are capable of this level of greatness, they just haven't quite achieved it here on Pendulum.

The Amalgamates from Tufts University are collegiate a cappella royalty. Of their eight prior albums submitted to RARB during the modernish era of scoring, not one scored lower than a 4.0 "good" cumulative score. In fact, two received a perfect 5.0 overall, and two received a near perfect 4.7 score, meaning half of those albums across a fifteen-year stretch were among the very best albums submitted to RARB. They've been featured repeatedly on each of the major a cappella compilation albums, and won Contemporary A cappella Recording Awards. This is a very long way of saying that much is expected from an Amalgamates's album, and this makes scoring one like Pendulum quite difficult. In the larger body of recorded a cappella music, the latest album from the group is unequivocally excellent, with passionate singing, stellar production, and precisely none of the pitfalls which ensnare many groups when they start recording. By 'Mates standards, however, Pendulum is not quite everything it could be.

The group's last album, Odd Man In, was not only one of the best albums I reviewed in 2014, it was one of the best collegiate albums I'd heard in years. The primary reason was the group's exceptional arrangements, which varied from instrumental to classic styles, with everything in between and even a few tricks on the outer margins. Pendulum fails to quite recapture this top-notch magic. Of course, as with all collegiate groups, the Amalgamates bring different arrangers to the party this time, and their efforts are not at all bad: they're just not quite as innovative. Perhaps it is the pendulum swinging back (sorry, I couldn't resist!) from the very forefront of a cappella arranging, but the longer, sustained tones and generally blockier chord constructions here feel safe compared to those arrangements which preceded this album.

The other flaw, if it could even be called such, is what I consider a lack of "appropriate rawness" in certain songs. Take Me to Church and The One That Got Away in particular suffer from this defect, though you'll notice I do not dock them for it, because both are still excellent songs. However, each brings such promising attributes, such as engaging atmospheres and powerful vocals, that I could not help but imagine what would happen if the guys at Plaid Productions left some of the edges a little rougher, left a little grit, a little sweat, a little blood in the final product. I know we live in an era of perfectly manicured entrances and cutoffs, singing scrubbed of breaths and humanity, but these were precisely the kind of songs to which such an approach can be antithetical. The songs still sound great, but man I'd love to hear them with the raw emotion which I can hear bubbling underneath the surface in each. With Odd Man In, there was sass, along with a full range of emotional honesty in many of the songs. I just don't see quite the same range here.

Enough about what could be better, there's so much to love here. Will Finlay's arrangement of Another Way To Die / Skyfall is epic, with unparalleled nuance and arc expressed through powerful singing, all accentuated by sharp cracks, slippery waves, ethereal bells and plenty of whistles from the guys at Plaid. C'mon Talk slithers along with a funky groove that matches, if not exceeds, the original. The aforementioned Take Me to Church has ominous fuzz and a haunting tapestry of sound coexisting effectively underneath the verses, while What Now is a beautifully bare and restrained version of Rihanna's hit. The One That Got Away shows enormous contrasts — from soft and stripped to loud and dense — with verve. I'd prefer a little more subtlety, but it's hard to argue with the power here. If there is one thing the Amalgamates continue to do really well, it is energetic and rousing singing. See also: I Bet My Life, the anthemic Imagine Dragons cover which bursts to life during the choruses after fun, lively, bubbling verse textures.

There's no question Pendulum is an excellent album. That it isn't the best Amalgamates album of this decade is just further proof that this group has set the bar shockingly high. Assuming you can tolerate an album with great, rather than transformative, versions of pop songs performed with contagious energy and polished with a shiny gloss, Pendulum should satisfy your aural appetite.

Pendulum is available on iTunes and www.amalgamates.com.