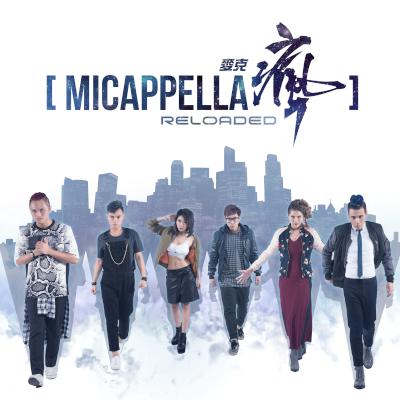 Bursting with polished professional pop, our friends from Singapore add another success story to their fairytale storybook with MICappella Reloaded.

Let's take a moment to talk about how astounding MICappella's success has been since the group's first submission to RARB in 2010. The group's debut album received a "2.3" here and was deemed "kind of a hot mess". Now they're on a label; frequently tour worldwide; are sponsored by (among other supporters) the National Arts Council of Singapore; and their stapled music liners are dense with big recording/production names and the hair & make-up stylist gets thanked, too. See where hard work could get you?

MICappella has ventured deep into original songwriting territory on Reloaded, with their alto Calin Wong co-writing the album's most effective piece, Hello Again. Breathy and enticing with lyrics that'll make your heart ache in a good way, Hello Again is the song I keep coming back to on this release, because it's the one where MICappella lets us come the closest to their natural, vulnerable condition as artists. Track seven (愛的詛咒) is intimate and memorable too, and track five (廢物) opens so beautifully it's like a hand beckoning us closer. Alternatively, when MICappella displays its super radio-friendly, bubblegum-pop-rock style (most prominently through One Of These Days, given two track slots here for two languages), it's still impressive to hear the group's feisty energy and the cutting-edge production soundscape, but it just doesn't have the permanency and creativity as the more intimate offerings on Reloaded. Though You and I (Against the World) manages to hit a sweet spot between both tilts — a slick and sassy pop offering to be sure, but one that's contagious in its charm. Bridging both sides of the pop-rock and artistically open spectrums is the production, with many of the usual American suspects coming together here to aid these keen talents: Alex Green, Ed Boyer, Tom Anderson, Bill Hare, plus MICappella's Singaporean colleague, Tat Tong.

As MICappella surely continues its talent-driven global dominance and deepens its original songwriting discography, I implore the group to refocus on providing the listener with a full spectrum of emotions. We lauded Here We Go so fervently at RARB that perhaps it's impossible to follow-up to expectations when one declares the release the best of the best. There, though, much praise was given to the creativity, uniqueness, and powerful production. Overall, Reloaded leaves me satisfied and entertained, but it feels like a lesser Part 2 of Here We Go. With these powerful voices and this much talent behind them, I'm ready for absolutely anything: to be inspired beyond measure / called to action / moved to tears / made to reexamine truths / surprised and startled by fresh arrangement forms / presented a uniquely themed album / or anything else MICappella wants to offer us...

Three years is a long time in the world of a cappella music, so it is not surprising that with Reloaded, MICappella has changed a few things since the group's last album, the shiny pop 2013 RARB Album of The Year pick Here We Go. Gone are the sparkles, the bleeps and blips, and the lush, thick harmonies. In their place are more sturdy, functional tunes which highlight raw voices instead of studio wizardry. The results are mixed, though not for any lack of energy or emotion. MICappella has spent the last three years working on new music, and nearly every song on this release is an original with songwriting credits by at least one member of the group. Often, the credits are shared with outsiders, and while that can be beneficial, it does create an inconsistency from track to track which leaves the album feeling a little like two or even three different EPs crammed together. It works, but only because the singers consistently bring the same focus and dedication to nearly every track, regardless of style.

The high point of Reloaded is Hello Again, a breathtaking force of push-and-pull twisty chords which calls to mind My Heart With You by the Rescues and Transit's long-revered cover of Hide and Seek. If there is not blanket coverage of this song in the American scholastic a cappella community within the next twelve months, it will only be because young groups aren't paying close enough attention to this powerhouse sextet from Singapore. Other highlights include the leadoff One Of These Days and track 2 (不怕擊敗), which translates as Unafraid of Defeat. The music for both was written by, and is driven by, vocal percussionist and producer Peter Huang. The tracks have a propulsive vibrancy which is contagious and a number of catchy hooks to keep you coming back again and again. Starting Point (aka 起點, track 4) is a delicious bit of retro '80s pop right down to the wailing guitar solo, and You and I (Against the World) is a mostly successful homage to Pentatonix's style.

There are also a few less successful efforts. Rubbish (廢物, track 5) feels unfinished, not to mention a bit toothless. Love (愛, track 3) is a lethargic ballad which feels restrained, as if the group was afraid to cut loose. The Curse of Love (愛的詛咒, track 7) has some terrific moments (like the cascades leading into the second verse, and the modulation — oh, that modulation!) built around a touching duet, but the balance feels a bit jumbled and the backing voices are buried too far off in the distance.

Of course, these criticisms must be kept in perspective. MICappella is a super-talented, savvy group sitting comfortably among the best in the world. Even though some of the gambles on this album don't completely pay off, the fact is the group took risks others don't by writing their own music and putting it on display. It is just a matter of time before they figure out how to apply the things which work so successfully on tracks like One Of These Days and Hello Again to every song. Reloaded is another impressive effort from an impressive group, and yet again MICappella has crafted one of the best albums of the year.

I've never been to Singapore, but one day I'd like to go. Originally a British Colony, since its independence in the '60s it has developed into a bustling city-state with a lively cultural scene. Okay, you got me — I just really want to go see MICappella perform at some point.

Reloaded is the second full-length album MICappella has released, and the first one with the group's current lineup. It's also completely original — all the songs are written and composed by the band members, frequently collaborating with legendary producer Tat Tong. Although the odd English line is thrown in, most of the songs are largely in Chinese, which means I don't know what the band is singing about. Luckily, that doesn't detract from the experience in any meaningful way.

The album starts with the powerful pop-rock number, One Of These Days, which also has a version with English lyrics later on the album. Bass and percussion are slickly produced and provide a driving groove for the solo and backing parts to harmonize and riff over. The next song, 不怕擊敗 (track two), is also upbeat, but MICappella also shows off its dynamic range across this album. There are the romantic duets (tracks three and seven, 愛 and 愛的詛咒), with singers crooning at and pleading with each other. There's also a more dark, almost dystopian track in 飢餓遊戲 (track eight), and an astoundingly self-confident EDM track in You and I (Against the World). Where other groups are sometimes intimidated to distort their voices to such extents, MICappella jumps in head-first and delivers a riveting performance.

As comfortable as MICappella is with adding heavy production to its songs, there are also songs such as Hello Again, a more choral piece at the opposite end of the spectrum, that leaves the voices bare, harmonizing with warmth and intimacy. You and I and Hello Again form the stylistic and dynamic poles of the album, and MICappella demonstrates its command of the range contained between them throughout the album.

Although it is often called a genre these days, technically "a cappella" is merely a form of instrumentation — no instruments, just voices. Yet, to some it seems to be more of a mission statement — no alteration may be made to the voices, no individual recording or mixing, let alone effects like octavizers or distortion. MICappella, meanwhile, doesn't much care about those rules. This group's goal is to make good music, which just happens to be produced without instruments. The result speaks for itself.