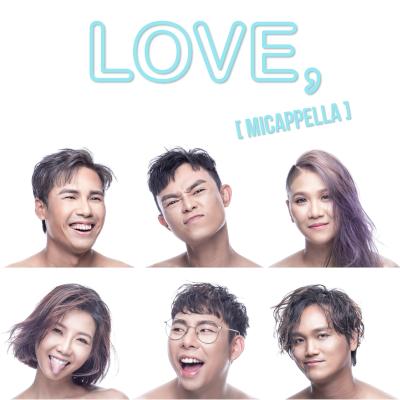 MICappella is back with an all-original EP that highlights all that these singers do, and what MICappella is masterful at accomplishing as a group: musicality, lyrics, and production. Love, MICappella is a love letter to all sorts of people: from best friends to new loves to recent births, thematically the album has all of the emotional heartstrings covered. The greatest recipients of this gift are the group's fans all around the world. Thank you, thank you. Most of the album is in Chinese, but you'll be able to appreciate the magnetism of the music even if you don't understand what's being sung. Primarily a digital album, there were a few cassette USBs made that may have the lyrics/translations in them. (I was forwarded the translations from the group.)

The album starts off Wo Yao Ni De Ai, a pretty groovy pop hip-hop song that has a very enthralling quality. The backs are completely processed to where they don't sound human, and that's part of the artistry of the track as it makes the harmony lines, and the choral additions, stand out even more. At the time of writing this review, the RARB staff was completing decade discussions for the past three months and reminiscing on the changes that have occurred during the past twenty years. I still think that Code Red from the Beelzebubs and Ignition by STREETNiX are two of the best a cappella albums out there. So, when a group explores all the possibilities available in today's studio for a track, I can get giddy trying to figure out what's going to happen next on the track. Wo Yao Ni De Ai delivers all the goods and more.

The track order of even an EP is important because it still creates an atmosphere and ambience for the listener. Having You Are The One follow Wo Yao Ni De Ai does a disservice to the track. I mean, the song is pure butter, but it's such a jarring departure from what you thought you were getting with the album that it takes a long time to warm up to it. It's great hearing multiple soloists on the track, though; I'd forgotten how much I like Peter Huang's voice.

I'm not sure why You Yi Wan Sui is sandwiched with refrains from Auld Lang Syne, but there you go. I mean, I get it, friends to the bitter end and blah blah, but I don't think it was necessary and for me detracts from the song. Now the video for the song is a different matter and the joyful tears were everywhere, so I love the song but it irks me a little.

CALIN!!!! Pretty much all I have to say about Through Your Eyes, the track that should take the world by storm.

The EP ends with two fine songs from the group: Ai Bu Ai and Sheng Ming Huo Yan. Ai Bu Ai circles back to elements of the opening track with a nice rap and a crazy engaging hook/chorus. Goh Mingwei and Tay Kexin have created a hit club track that's got quite a Superfruit attitude about it. The end of the chorus gets me everytime:

Love is love, it doesn't have to be frustrating,

Love is love, every day will be better

Love shouldn't be without you by my side

The English translation doesn't pop the same way it does in Chinese, but just know that it'll stick with you hours later.

Love, MICappella is a little taste of what MICappella's been up to since the group's last album, MICappella Reloaded, and it's definitely been worth the wait. Listen to it wherever you can and just feel the love.

Professional group MICappella is synonymous with "excellence". The group's high standards, coupled with a tight focus on the universal theme of love, earn this release more deserving praise for musicians who were also awarded a Pick of the Decade.

I was, and remain, a bit taken aback by the first track on Love, MICappella, however. Post-production, Wo Yao Ni De Ai has lost all traces of its a cappella roots, becoming purely manipulated vocal electronica. Though it's sonically unique, it doesn't showcase the group's vocal strengths. And if you're new to MICappella, it's not a great introduction to the group, either; maybe this is a sextet, but who can say? Maybe these voices are totally brilliant, but who knows? You just can't tell from what could easily be named, Engineer's Fanfare. If album programming still matters in the age of digital streaming, MICappella could consider putting these production showcase pieces further into its releases to serve as transition tracks.

Love gets personal and presents the EP's best with Through Your Eyes. Here, poetic lyrics and tenderhearted singing take us through childhood, parenthood, and our role in both. The opening sound clip of a child singing You Are My Sunshine really tethers this piece right to the heart. It's evident this song means the world to MICappella, a sentiment that is so hard to capture on a recording. Through Your Eyes is a tribute piece if there ever was one.

Ai Bu Ai is complexly rhythmical, bubbly fun that overflows with showmanship. This is squarely in MICappella's wheelhouse, as is the huge stadium-style closer, Sheng Ming Huo Yan. This is a group that has often presented flashy, fast, assertive pieces, and these two will leave fans of that vibe satisfied.

If MICappella's objective was both singing about love, and loving to sing, Love, MICappella presents it beautifully. Also, this release is available in a clever physical form: a faux cassette tape! What a terrific gift for your own loved one!

Hailing from Singapore, MICappella is one of the best groups to prove that language is irrelevant when music is presented effectively. The group describes this album as "a love letter from us to you". The take on love is all-encompassing: Love, MICappella shows all the ways that love is around us, and it's a breathtaking performance.

This album is just crisp. Starting right at the top, Wo Yao Ni De Ai has an underlying vamp of pulsing chords that sets the foundation for the rest of the song. Whether it's soft flowing melodic passages, percussive elements such as snaps or vocal percussion, small spoken word sections, or accenting chords, everything about this piece is set up to let the soloist just flow effortlessly through the speakers. For a song that could so easily get lost in that underlying vamp and suddenly have no direction, this piece ebbs and flows flawlessly while holding the listener's attention. The climax of the piece isn't attempting to overpower the listener; it's more like a warm embrace, perfect for leaving us wanting more.

On a completely different thought, Through Your Eyes is absolute perfection. I was initially worried about a piece starting with what sounds like an old home video of a small child singing You Are My Sunshine. As the piece fades in, it becomes clear that this song is a love letter. This track is a story told by a parent about their child. The soloist sells it perfectly, delivering moment after moment of perfectly saturated emotion. In popular music, love is so frequently portrayed between romantic partners that it's easy to forget other types of love exist in song. This piece highlights a love that is pure and wholesome and is delivered in a way that just radiates the soloist's thoughts.

If there's only one issue with Love, MICappella, it's that it's too short. This album only has six tracks, and I would love nothing more than to hear more thoughts on love from MICappella. Even from the names of the tracks, it's obvious that this album covers many types of love, whether romantic, familial, or simply the existence of love. There are so many more avenues that the group has hinted at that could be explored. I will wait with bated breath for the next installment, but will happily listen again for all the ways love is around us.