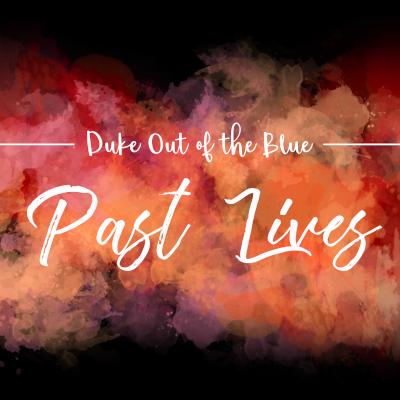 Past Lives is an apt name for the latest release by Duke's Out of the Blue. It is a solid album, nothing to be hypercritical of, but also nothing to get anywhere near excited about. And that's because it sounds like an album from the past. We've heard it all before.

Now I will say that I'm a foreverfan of OOTB — have been since 1990 and don't see my appreciation waning anytime in the near future. That's a lot of listening to a group develop, explore and perform. So when I say that it sounds like something from the past, I'm saying that this album recalls the group from around 1992 to 1996 for me. Different songs, but the same sort of arrangement style and musicianship.

The closing song Past Lives is super indicative of this. Since the entire album is very "natural" sounding you hear all of the "doom doom BAH doom b doom diddty doo doo" in the bassline instead of the more current recording style of muffled produced "dm"s. The only aspect that really lets you know that the group is singing in the 21st century is in the "jin" guitars at the end of the phrases. Otherwise this is your mom's a cappella.

Which is not a bad thing completely. It's just not very innovative in this day and age. The singers have beautiful voices, but there is nothing compelling to listen to any of them. Everything is just so sweet — there's not a lot of fire, passion or grit behind any of the songs. I mean, they sing a lot of songs about Hell, and make it seem like it's really not a bad state of being, or loving your lights out in XO / See You Again, which is not very promising. Jessica Matthys and Janiece Morgan come closest to putting a dirty emotion (a "stank" as we sometimes say) on performances of Delta Rae's Cold Day in Heaven and Water Under the Bridge respectively. I was just expecting more, but especially more variety, from everyone based on the tracklist. Each soloist seems like they could have sung any of the other songs had the key simply modified up or down.

On repeat listens, the album does take on a more theatrical nature. Especially with the inclusion of the Glee cast version of Taking Chances. And I love it.

There is a treacly storyline going through here somewhere. Love lost, worlds to explore, standing up in the face of defeat. Something. I want a clearer definition of what this is with the next album, with a little more heart and soul added to the performances. That's the Out of the Blue that we should be blessed to hear.

P.S. Even the liner notes are from the days of yore. It's no longer sufficient to list just the soloist, original artist, and arranger. Do better.

Offering another eclectic mix of female-empowerment jams, Out of the Blue's Past Lives finds strength through memorable leads.

The group's prior RARB submission, Youth, had all three reviewers noting its beautiful ensemble sound and strong soloists. We're treated to these strengths again on Past Lives. The soloists are providing the most noticeable distinction of Past Lives, with each lead offering a unique voice that makes their song, their song. As for the backgrounds, you'll also note that the arrangements are difficult and content-rich. These aren't easily memorizable pieces; you don't just pick up one of these charts and have it ready for fine-tuning in a few passes. Both of these areas show that Out of the Blue is advanced in its musicianship and internal musical leadership. There's even a mashup — XO / See You Again — that works musically and lyrically when combined, which is quite difficult to get right. Kudos to the music director(s) for pushing your group and having such high expectations.

Ex's and Oh's was not the chosen single for this album (that goes to Drumming Song), but it would have received my vote for an Internet video. It's got a full concert-sound, and a sassy short-skirted flair that makes you want to be in this group. Continuing its tilt toward emotionally-driven pieces, OOTB offers a number of such works in a row to continue Past Lives. Of this grouping, I'm the least smitten with Tears Dry on Their Own; the filter makes it sound muddy and distant, and the song goes on and on without enough development. The lead line, in particular, simply needs a bigger range of notes for aural interest against her background singers, which is not OOTB's fault, but more of an artistic difficulty with the style choice of the original's solo-sans-group, delivered by the late/great Amy Winehouse.

Want a pair of impressive soloists to coo over? Give soulful Beanie Burt of Box of Stones a spin to hear truly purposeful singing, or marvel over the energy Sophia Santore ratchets up in Taking Chances. Totally different approaches, both equally successful in listener impact. That's the story throughout Past Lives: soloists varying wildly in styles but still crafting their pieces exquisitely.

What hinders Past Lives is vocal percussion that's gone too artificial, too copy-and-pasted, especially on Drumming Song where it should be anything but. This is a group who devotes so much attention to details; why not work to make the rhythmic presence more lifelike, too?

Still, you'll certainly be engaged with something on Past Lives, an album built on hard work by solid musicians.

Out of the Blue's Past Lives has a nice sound and some fun song choices, but many of the arrangements suffer from similar issues. There is a muddiness to the rhythm in many of the uptempo numbers which stems largely from percussive singing that doesn't jive with the vocal percussion, and it alternates between creating the sensation of dragging and of imprecision.

Florence + The Machine's Drumming Song, for example, has a very distinctive beat, and too much syncopation in the background vocals on top of that beat leaves the listener feeling off-kilter. Later on in the same song, though, the problem is resolved: background vocals are smoother when there's a heavy beat and complement that beat as it builds.

There are also times when the audio processing detracts from the group's natural sound, particularly the octavization effects in several of the songs. The opener Ex's & Oh's and Water Under the Bridge serve as good examples of the two types of problems the effect causes throughout the album. In the former, the artificial heaviness of the sound draws attention away from the overall background mix, and in the latter, creates a plodding effect that seems to weigh down the rhythm and forward motion of the song.  Out of the Blue has a lovely group sound; the extra audio processing isn't necessary.

The group makes some interesting soloist choices that bring a new perspective to well-known numbers. I am a huge fan of Sophia Santore in Taking Chances, originally by Celine Dion. Santore has a sweet, Disney soprano-style voice, very different from Dion's power belting, and it draws attention to the ballad style of the song. The arrangement, also by Santore, serves the number very well — it is rhythmically simple and showcases the group's blend.

Indeed, Past Lives excels when it is simplest, and when it highlights the lovely natural sound of the voices in the group, particularly when it's in contrast to the original style of the song choices. The original Box of Stones solo line, for example, is heavily edited to sound doubled and synthetic, where Out of the Blue's Christina Burt (main solo) and Elizabeth Yonko (harmony) bring a new sense of clarity to the song that serves it well.

Though it feels like a bit of a nonsequitor compared with the rest of the album, the choral-style singing at the beginning of the closer and title song, Past Lives, is another testament to the beautiful natural sound of the group. There are some problems with the choral segments, however — some of the chords don't resolve correctly, and the suspensions are assigned to voice parts in such a way that they sound off even though the actual notes are fine. It's hard to tell whether the problem is an incorrect transcription or an attempt at writing different chords, but it's a shame that the final chord of the entire album doesn't land in a way that satisfies. The choral conceit in pop music certainly isn't bound by classical rules of voicing and line leading (eg. if the bass line does this, then the soprano line has to do this), but these rules remain an integral part of our understanding of music across genres. Sometimes if a chord progression sounds off to the casual listener, a subconscious understanding of classical voice leading is to blame.

I don't mean to sound overly disparaging. Past Lives has a lovely sound overall, and some very nice moments, but the moments that stand out are the quiet and simple ones, and there's a lot of extraneous decoration getting in the way of that core beauty.