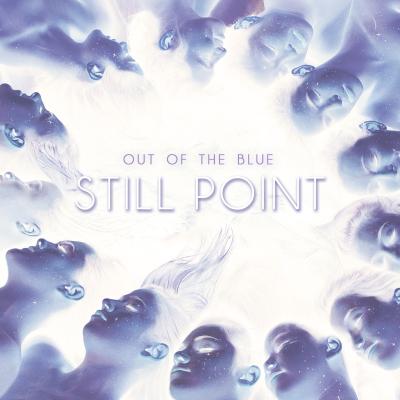 Still Point has an Age of Aquairus/new age feel, both through the presentation of the album art and the more out-of-the-way song choices for a collegiate album. It may also be a polarizing album for listeners. Do you want to hear what the best a cappella production can achieve these days? Here you go: this stuff is HOT, outrageously so, courtesy of Sperandio, Bates, Lyons, and Boyer. Are you interested in hearing the boundaries of the human voice unfiltered, unaffected, and relying on its own natural talent for creativity? This ain't it. So what's your drink of choice?

Granted, let's be frank: one can't produce an album like this unless the ladies are bringing enough vocal talent to work with, and Out of the Blue is a fantastic ensemble. In particular, the arranging is always full of growth and unique syllables, giving the guys mixing a lot to put their hands on (the first three tracks in particular must have been great fun to embellish). The soloists are generally strong, with one exceptionally so — I don't think I've ever heard riffing and effortless sounding vocal flicks and licks and tricks like Debra Armour achieves on Bust Your Windows; she puts an audible exclamation point on that whole song. Energy is good throughout Still Point, and the blend is good too, so the floor boards were solid before these songs started taking shape as a studio album.

Yet the production must remain the talk of the day. There's a fun love obsession with the sopranos, who display a lot of trilling and chirping that add a nice mesmerizing stamp on top of many tracks (Go Do, Love Will Tear Us Apart, and Cosmic Love in particular). Conversely, there's also some subhuman octavizing work going on, where the outcome is, ironically, basically men singing parts on Only Girl (again, a polarizing album). But the strongest production work has to be on Undisclosed Desires, as it sounds like the track was cut in a dungeon (you know, like a dungeon that pumps really cool music). The engineering on Still Point is really something.

The weaknesses here are only minor wobbles when considering the work as a whole. Superstition sounds fine, but not as crazily amped and worked as the rest, so it stands out. The soloist for Why? puts in so many vocal stylings that the melody is lost, and the result sort of sounds like she drank some extra boozy punch — a good effort that just went overboard. The lead on Cosmic Love is too thin for the heavily textured background, and a little shaky too, and often turned down too much in the mix. Marissa Bergmann's original * * * is pleasant enough when the song starts its forward motion, but some of the whispering, especially in the intro, is probably excessive. A few more thoughtful tweaks would have really placed Still Point on a very high platform.

Still Point is certainly a fascinating listen, especially for those into studio effects.

The ladies of Out of the Blue have made some upgrades since their last album. If you consider the fact that the group's last album was Flywheel, aka the CARA winner for Best Female Collegiate album in 2010, this is very good news. Still Point has all the strengths of its predecessor, but slims down a bit (eleven tracks as opposed to thirteen), and as a result feels that much more focused. Add to the mix a pretty solid original track, and some unconventional song choices for bonus creativity points. Good news indeed.

OOTB may be the college group to beat in terms of all-female arranging. The group's use of texture and timbre is just outstanding. For a primer on building texture see Go Do, which, while perhaps not as exciting an opening song as Keeps Getting Better, still features some fantastic arranging textures and sounds that recall the tonal creativity of groups like Rajaton. For a simpler moment of equal success, check out the wonderfully sultry, nuanced opening riff to Love Will Tear Us Apart. The voicing, tone, and dynamics are out of this world. It's the kind of attention to detail that we reviewers so seldom see, and thus get so excited for!

The gem of the album is Janelle Monae's Violet Stars Happy Hunting!!!, which I am currently using to test whether or not it is possible to wear out an mp3. There are so many things right with this track that it's hard to know where to begin. The groove is spot on, the arrangement is energetic, and Michelle Lemani's solo perfectly captures Janelle's signature lilt. The song is a great match for OOTB's energy, giving them the opportunity to be simultaneously sultry and earnestly groovy. Outstanding.

My one big criticism is that certain songs just don't hit hard enough. As on Flywheel, this group excels at smooth. The trade-off is that tunes like Cosmic Love and Bust Your Windows feel too contained. There's a primal quality to the originals that is replaced here with a certain cerebral sense. Head trumps heart where it ought not. I can still appreciate and even love these tracks on their own terms, but a part of me can't shake the feeling that they could have been bigger, more urgent, and more animal.

Quibbles aside, Still Point solidifies OOTB for me as one of the best all-female college groups out there. Check it out — you won't be disappointed!

Duke Out of the Blue's Still Point is a step back from 2009's Flywheel. That album had some outstanding arrangements, excellent use of dynamics, and near-perfect matching of soloists to songs, but Still Point unfortunately falls short.

The biggest issue with Still Point is that this is a group from whom we expect greatness, and this album is merely good. Many of these arrangements are really repetitious (Lesson Learned, Superstition) and/or have other issues. Only Girl is both repetitive and absurdly shrill — and I get that they're copying the Rihanna song, but the harshness here is just too grating. The percussion/handclaps on Bust Your Windows are so loud (and harsh) that it becomes difficult to hear anything else. The arrangement and backing voices on Go Do are fantastic, but the solo and lyrics just feel too stiff, losing the freedom of the original song. Undisclosed Desires doesn't ever capture the grit of Muse, which is a tall order for an all-female group, but my biggest compliment of Out of the Blue's Flywheel is that this listener forgot that OOTB was an all-female group. On Undisclosed Desires (and on Superstition with its famous bass line), OOTB's all-female range was all I could think about.

There are some great moments here: Cosmic Love is an engaging arrangement with a great texture, and the original song * * * is stunningly beautiful (huge kudos to Marissa Bergmann for her solo and composition here — it's gorgeous! More originals from OOTB, please!). Love Will Tear Us Apart is a lovely arrangement as well — surprising for me to admit that, since I grew up listening to Joy Division and generally don't like Nouvelle Vague's covers, but OOTB's version of the Nouvelle Vague cover works really well for these ladies. (Also: thanks to the group for crediting both the original artist and the artist whose version OOTB was covering in the liner notes.)

All in all, Still Point is a solid album, and Duke's OOTB does an above-average job of presenting straightforward covers of these songs. The problem is, this is a group that has shown — both on previous albums and on the high points of this one — that it is capable of truly great arrangements, interpretations, and soloist moments, and that's why Still Point feels like a bit of a letdown.

To order this album, visit Out of the Blue's web site or the iTunes store.