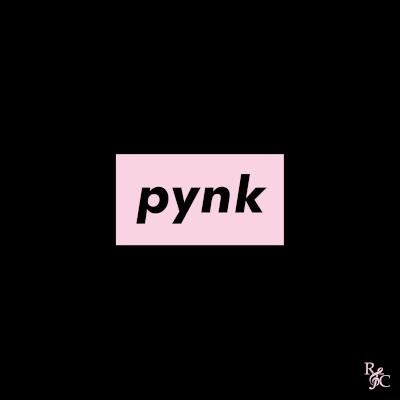 Run for Cover keeps delivering engaging a cappella music to its fans, if the group's latest release Pynk is any indication of where the group's abilities lie at the moment. This four-song EP is an interesting compendium of electro-pop-styled tracks, and whether in the ballad or upbeat genre, really sets the group in a party atmosphere. The EP follows the literal definition of a yearbook album without the negative connotations usually associated with that term as it is a studio recording of the group's 2019 ICCA set.

So what's going right with the EP? The energy and innovation. The Overpass is exuberant and really blasts out of the speakers into the listener's ears and soul. The Quiet has a shifted rhythmic pattern that is interesting and provides a cohesive quality for the album itself.

The innovation of the album comes from the arranging skills on display; the subtlety is captivating. Daniel Morrison does an incredible job of incorporating snippets of the other songs into the current track, both lyrically and melodically, and seems to have learned a lot from arrangers Alex Hummels and Will Shore who recently gave the world Dark Necessities / Can't Stop. I really enjoyed that song for its creativity that seemed extremely organic and necessitated by the music that was happening, and not forced.

I also find the smooth transition from The Kite String and the Anchor Rope into The Quiet to be super evocative. At first, the transition makes The Quiet seem like the bridge or interlude between two sections of Kite String, which is quite acceptable in terms of emotional appeal. I think when the lyrics circle back at the end of the track to include The Kite String and the Anchor Rope in an upper harmony obligato, it provides a release like no other. Unfortunately, on the Spotify recording for the track there is an abrupt cut-off before the soloist and the song really ends: it goes "anythinnn", ending in a weird way that doesn't seem to be on purpose since the first three tracks don't have this issue. The transition doesn't make sense if this is a replication of the group's ICCA set; the chord doesn't end, but doesn't feed into the next song, either. It is not as noticeable when I listen on iTunes.

Walk On Water / Ocean is already a fantastic mash-up and the incorporation of the other three tracks is just icing on the cake. Seriously, I'm still thinking about the effortless transitions between the songs. Thematically, the two just mesh like they were written as one song. "Do you believe that you can walk on water? You could put an ocean between us." SAY WHAT?!

The only thing holding the album back is the overall musicality of the group, but especially of the soloists. I'm not going to harp on that. They all sing earnestly and with conviction, but sometimes the intonation and vocal placement isn't of the same quality level of the backs or the overall track. I've mentioned that before, and it's generally the nature of the beast. And even though the backs are good, they often come across as really hot in the mix — lots of loud "doh", "dah", "doo" and "whoa"s when they shouldn't be at the forefront. But that's a quibble because I didn't always notice it on first passes.

As stated above, Pynk (a great reference to Mean Girls and homage to the group's previous concert "On Wednesdays We Wear Pink", since that is what they do) is a yearbook album. It's a memory that the performers should be proud to hold on to, and an audience would benefit from listening to for Morrison's masterful arranging. Get it.

Pynk as a whole is greater than the sum of its parts: each of these songs sounds really good on its own, but Run for Cover has put them together in an arc with arrangement choices that make these tracks flow seamlessly. This is a studio recording of the group's 2019 ICCA set, and it sounds like it, from the pacing of the set to its just-under-12-minute length.

Every song here flows into the next beautifully, and the final track, Walk On Water / Ocean, contains snippets of previous songs in its bridge, which makes it a stunning set-closing (and EP-closing) track. The group's music director, Daniel Morrison, arranged every song here, and that consistency shows with a beautifully coherent sound. Each track follows smoothly from the previous one, and there was obviously great thought put into the song choice, song order, and set pacing. Morrison has done an exceptional job here, and he's definitely a name I'll watch for in the coming years.

The only downside of Pynk is that it works best as a whole EP; listening to these songs out of context or on shuffle doesn't work as well as the four-song arc. Certain snippets are stronger than others (The Quiet is my favorite of the four tracks here), while the Walk On Water portion is likely the weakest — but by the time we get that far into the EP, it doesn't matter: it might not be able to stand on its own, but it doesn't need to. In the context of the mash-up and with the snippets of the other tracks woven in, that final song works exceptionally well as a conclusion to the journey that Run for Cover has taken us on.

Certainly, Run for Cover couldn't predict the future and had no idea that the 2020 ICCA competition series would be cancelled partway through due to the COVID-19 pandemic, but the group's timing is impeccable: during a semester where we're all keeping our social distance and losing opportunities for in-person concerts, it's particularly nice to have a new-to-me ICCA set to hear. It's a small reminder of what we as a community have lost this year, but it also offers such promise and hope for the future, whenever that may be.

On the first listen of Run for Cover's new EP, Pynk, I was super impressed and was sure that I was going to be giving this EP a "5" rating. The arrangements by music director Daniel Morrison are fantastic, the whole album has a great vibe and energy from top to bottom, and it's a well-sung release from all parts. But then, I gave it a few more listens, and I quickly started finding things to pick apart. Some big, some small, but enough of them where I realized that I couldn't give this album the high marks that I thought I was going to give.

The EP is four tracks long, but I actually only see it as two, since tracks two through four lead into one another when you listen through the whole EP. Morrison also incorporated tracks into one another (for example, there are snippets of The Quiet in Walk On Water / Ocean), which I think was a great decision. Not only do the tracks lead into one another, but they seem to build on each other emotionally and dynamically, with the group moving from the more emotional (The Kite String and the Anchor Rope), to ending with the recent rock anthem from Thirty Seconds to Mars. Notice how I said "seem to"; I don't think the singers quite pull off the emotional journey well enough with their dynamic range. In The Kite String and the Anchor Rope, I would have started softer in the beginning. The line "then the silence comes" is a little too strong across all parts; the emotion/volume doesn't match what's being sung. More importantly, it doesn't leave anywhere for the group to go dynamically, leaving the final track only marginally stronger than where the group started. I'm not saying that the group shouldn't have played dynamically within each song; in fact, I think the group does a great job growing The Kite String to a climax at the end, before coming back down when transitioning to The Quiet. But, in addition to thinking about each individual track, the whole three-song arc needs to be thought about when you bleed the tracks together like Run for Cover does, and that didn't appear to happen.

Walk On Water / Ocean concerns me, too. Overall, there is a lot going on, starting around the two-minute mark when parts from at least three different songs are being sung at the same time. It may sound different in a live setting, but the way that the recorded track was mixed, it comes across as a little chaotic. It's as if all parts are trying to step forward, thinking that they are the lead, and this results in a wall of sound that's hard to navigate through. I enjoy both soloists, Jonathan Rockhill and Alexander Reed Hummels, and think they do their best to cut through all of the chaos. However, and this is definitely the choir kid in me talking, be careful with words ending on the letter "r". During the Walk On Water verses, the "r" in words such as "clear", "fear", and even "water" are stressed and held onto quite a bit rather than sustaining the vowel before it. It seems like a minute thing, but it's really important when it comes to making sure that the listener understands what you are saying and to make sure that words do not sound cut off.

My favorite track on the album by far is The Overpass, which is a great, strong track to open the EP. Led by the great vocals of Ale Clark-Ansani, the mix is well-balanced and shows the good dynamic range that I was looking for later on in the release.

If all four tracks were as consistent as The Overpass, the album would have been a "5" from me for sure, as the talent from the group is certainly there. What I am looking for moving forward is consistency.