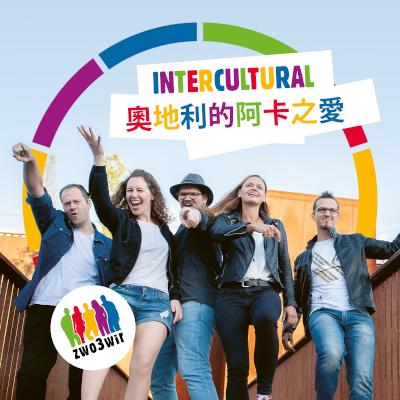 Intercultural is a hot mess. If you want to hear some decent covers of a pair of Chinese pop hits, it might be worth your time, otherwise skip it and head back to Purpurblau.

That's the bottom line here. The six collected tracks, released in the early days of the pandemic, don't go together and – to my ears anyway – actively pull each other down. Two are remixes of the same song, a cromulent cover of the Chinese theme for Mulan. There's another Chinese ballad, then two are repeats from the group's previous release: the excellent Desert Rose, which seems totally out of its element, and the weirdly disappointing Summa, Sunn & Zärtlichkeit, which was one of my favorite tracks on the last album but here feels too acoustic to keep up with its more heavily produced neighbors. That effect of hyperproduction next to more-or-less straight up singing is even more pronounced on Sound of Yodeling, a Sound of Music medley that doesn't really yodel at all. Some full-on real yodeling would honestly have cheered me up more.

Certainly the presentation here didn't set Intercultural up to succeed. It's only available on streaming, mostly on platforms I don't have. The YouTube stream is incoherent. The tracks have different names in different places, especially Back Here Again, a Chinese ballad that involves nostalgia and eggplant. I'm willing to accept that the combo makes more sense if you know the culture it's coming from, but it's just not that engaging as a context-free, purely musical number. Separating the Chinese tracks from each other is yet another mistake. The styles are so different, the moods are so different, and the juxtaposition makes it hard to appreciate any of it.

The members of zwo3wir are very talented and have put out some great work in the past. Here's hoping to more in the future.

The Austrian quintet zwo3wir is back with its third release, with an expanded repetoire to include selections in Chinese alongside tracks in both English and their native German. And while I can certainly appreciate the effort that was put in to learn the Chinese pieces, the whole album simply does not pack the same punch that the group's first two albums delivered.

Instead, many of the tracks merely sit in a pocket that doesn't offer a lot of variation in the arrangements to keep me completely engaged. For example, Summa, Sunn & Zärtlichkeit is an original track that celebrates summer, warm weather and the excitement of going on holiday (or, for the American readers, vacation). The message is obviously very upbeat and happy but I don't quite receive the level of excitement in the background vocals to match the solo line. There's not a whole lot of dynamic change throughout the song and the background just kind of bounces along without any sense of energy or urgency. It does pick up a little bit at the very end with some added vocals, but it's not enough to drastically change the impact of the track.

Sound of Yodeling is a brief medley of some of the tracks from The Sound of Music, including the songs So Long, Farewell and Edelweiss. Both of these tracks are sung beautifully and there is a lot more use of dynamics and emotion here than in some of the other tracks. What I find interesting, though, is the pronunciation of certain important words and phrases. In German, the standard rule is that the letter "w" is pronounced the same way that a "v" is in English. So, the word "Edelweiss" should be pronounced "ay-duhl-vys", which is how it is pronounced in the movie. And yet, for some reason, the group consistently pronounced the "w" like an English "w" — "ay-duhl-weiss". The same thing happens when the group sings "auf wiedersehen" — it comes through the recording as a "w" instead of a "v". Now, in Summa, Sunn & Zärtlichkeit, there are a number of words that begin with "w" throughout the song, and all are pronounced correctly from what I can tell. So, the only explanation that I can think of is that the group decided to change the pronunciation, but it's hard for me to understand why the musicians would do that with selections that many of us know quite well. Despite the songs being sung in English, I would argue that it's better to sing those words with the correct pronunciations given that they are German words rather than trying to anglicize them to fit.

Mulan opens and closes the album (with the closer being a shorter radio edit), which recaps the story of Mulan that many of us know from the Disney films. The song doesn't have many of the issues that I outlined earlier, and has much more of a musical arc to the piece than the others do. I just wish that all of the tracks on Intercultural followed this level of attention to allow me to give this release a higher score.

One of my favorite things about RARB will always be the diversity that I have been exposed to throughout the a cappella community. Austrian quintet zwo3wir gives us a fun little look into the European a cappella scene with a release that is diverse, fun, and well executed.

There are two main buckets that the album tracks fall into. The first grouping is the tracks that in many ways feel like classic a cappella. Summa, Sunn & Zärtlichkeit (Radio Edit) has a carefree vibe and the rhythmic stylings often associated with reggae music. Of course, for a title that translates to "Summer, Sun, and Tenderness", I can't think of a more appropriate style. This is the kind of song that is a great addition to any performance set. It's also a great chance for the group to highlight the strong soloist in Michael Burghofer. Simultaneously, Sound of Yodeling, a medley of songs from The Sound of Music, is a piece that will have the audience singing along the whole time. Neither of these sets are pushing the limits of what the group is capable of (although Yodeling does showcase one very impressive falsetto high note), but they do keep the sound accessible for the audience. These pieces highlight the fundamentals of a cappella music and do it quite well.

These fundamentals are important when the group shifts to the pieces that feature a more modern sound. Desert Rose is my favorite track on the album. I don't know how to describe the sound, but it does seem to have the vague haunting feeling that accompanies the beauty and emptiness of the sandy dunes of the desert. Mulan — 李竺芯 offers a similar haunting beauty. Soloist  Judith Fuchslueger does a phenomenal job of telling the story. There are musical motifs of struggle and beauty that penetrate through the speakers in a way that is independent of language.

The duality of this album is really the defining feature of Intercultural. The group has such a strong grasp on its musicality that it shines through in every piece. Serious praise has to be given across the album to Tina Haberfehlner, who arranged the entire release. Intercultural has a little bit for everyone to enjoy, and the technique to make even your least favorite piece still pleasing to the ear.