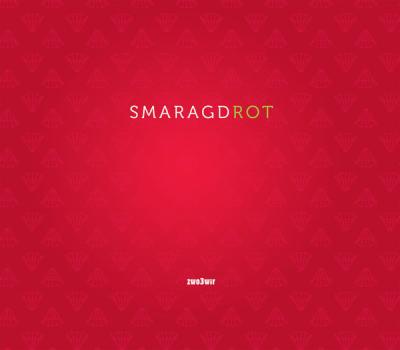 Welcome to the wonderful world of German pop music. Austria's zwo3wir made the brilliant choice to start its new album with two songs in the group's native tongue, dropping listeners in the deep end of what may be a new cultural experience. Decoded for the American listener, this new disc is a charming tour through another culture's a cappella enthusiasms.

Like good grammar, this album becomes more elegant when you consider its structure. The group's name — "zvo-dry-veer" in 'murrican sounds — means 2 (women) + 3 (men) = us, the quintet in question. "Smaragd" means emerald, hence the faint gemstones outlined on the carpet-red cover. "Rot" means red, which must be why it's written in spring-green text. Even the song order has a structure: from To Us to You, You, You, through an anthem, we emerge to the sight of beautiful fire. The symmetry of the two German covers goes beyond the pronouns: one is an uplifting mass-audience pop hit while (as far as I can tell) the other comes from a German a cappella comedy group called Die Echten, who have a pretty awesome web site.

Musically, the tenor solos — presumably sung by named tenor Paul Schoerghuber and baritone Michael Burghofer — make Smaragdrot for me. On Auf Uns, Du Du Du and I See Fire, the singing makes the songs come alive and sound strong enough to play along with anything. Keep Breathing is a strong second. The group has a good feel for the mood of the song, if coming a hair shy of the performance I wanted. The sung English came across to me like a jarring mix of British and American accents (pick one! either one! or at least put the "g" back on "breathing"), and also both of the female soloists have a folkier sound than the poppier guys. As a folksinger myself, I think it's a great sound, but as a listener here it requires a bit of gear shifting.

The other three songs are best viewed as novelty numbers. Landeshymne starts straight up classical — my favorite part — swings through jazz and ends up in the disco. Christina Aguilera's Beautiful is reinvented as a bass solo, and That Man ends the album on a cabaret. All professionally sung, none with performances strong enough to transcend their underlying gimmicks.

That leaves four songs I quite like and three that are fine, plus an overall package that got better with time. Is zwo3wir for you? Might be worth finding out.

European precision. Most people think BMW or Audi. I think zwo3wir. Smaragdrot shifts gears smoothly, turns on a dime, and all with that new album smell! If you spring for the good sound system, you'll be hitting the a cappella highways and by-ways in style!

Zwo3wir, a five-person group from Austria, goes from zero to sixty in four seconds flat. Auf Uns made me want to dance right away. The bass/percussion duo in this group are machines and it really works in this track. Then we slip into cruise control with Du Du Du. This track has beautiful bell tones that really set the mood. Interested in some sight-seeing? Landeshymne seems to take you from a university campus all the way to an Amish paradise.

As I said, Smaragdrot switches gears like a dream; that includes reverse. Beautiful slams the brakes all the way down. The bass singer is a machine, but that leads to a fairly emotionless performance while in the driver's seat. The arrangement is fine, but doesn't play to the group's strengths. Luckily they pick up steam again with I See Fire. It just misses the epic quality the song calls for, but it still satisfies and gets you back on the road. Keep Breathing slips you right back into cruise control and lets the ladies really shine with soaring tight harmonies. Finally, it's time to party. That Man is full on jazz and closes the album as strongly as Auf Uns opens it. It's the perfect track to drive off into the sunset with.

The production value is top notch. Nothing fancy, just pure efficiency. Exactly what's needed to let the arrangements and the amazing blend shine through with high beams. Even with a little off-roading in the middle, Smaragdrot is a luxury a cappella ride you don't want to miss!

I have a confession to make: I am not fluent in German. In fact, I only know a couple of words in German after traveling to Austria earlier this year for work. So, when I received this album from zwo3wir, the group of five from South Austria, my first order of business was not listening to the album ... it was trying to figure out how to pronounce the group's name. Luckily, Google Translate solved that problem (in case you're interested, I believe it's "Tsvo-drei-veer"). Upon listening to the album, though, I find myself focusing on the "zwo" part of the name, which translates to the number two. While the two and the three in the name highlight the two men and three women that make up the group, I also see the "two" referring to the two distinct sections on the album, separated by the language in which the songs are performed.

The first three tracks on the album are all in German, and thankfully zwo3wir provided translations for me to follow along — dankeschön! The group opens up with Andreas Bourani's Auf Uns, which is an uplifting and upbeat dance track that provides a great welcome to the album, starting with the "violins" that really set the tempo and the overall mood of the track. The track reads as a toast between a new couple finding each other, and to all of the amazing days that they have ahead with one another. zwo3wir's decision to make the track into a duet really drives home that message very well, with passionate solos from both Michael Burghofer and Judith Fuchslueger. That mood drastically shifts in Du Du Du — even without looking at the translation, it's evident that the soloist and background parts are giving a much more melancholy delivery to the track, and it's very well done throughout. I do wish, however, that there were more use of dynamics in the track. In the chorus, the first line translates to "And I say goodbye and turn down the volume, cause it shouldn't be loud when someone leaves," but the group keeps the same mezzo-forte volume throughout that entire line — some sort of decrescendo or other dynamic change would add a little more color to that part of the song. The third track, Landeshymne, showcases the creativity of the group. After starting the anthem of South Austria with Beethoven's original melody, zwo3wir continues with the traditional words while traveling through a number of musical styles, ending with Coolio's Gangsta's Paradise. While I do appreciate the effort and creativity that went into this track, and there are a lot of interesting and fun moments, I'm not sure if a song like a national or regional anthem is the right medium to showcase this creativity.

The last four tracks are zwo3wir's English set, and as great as the first three tracks are, these four tracks don't grab my attention to nearly the same degree. Beautiful is too rigid from the start, in both the solo and the background vocals, and I wish that there was more growth in energy and dynamics between the chorus and the bridge. I See Fire is well-balanced and this track does have much more of a direction musically in regard to dynamics and focus, but the decision to cut the 2nd verse from Ed Sheeran's original version is a bit surprising. zwo3wir seems to find its mojo on the last track of the album, That Man. This jazz track grooves the entire time with a fun solo and clever percussion that, combined with the smart arrangement and the attention to dynamics between the verses and choruses, has me dancing along from the opening "ooh" to the final chord.

There's a lack of energy in the middle of Smaragdrot that clearly isn't present in the first three tracks. If the group can replicate the dynamics and energy displayed early on, that will go a long way toward making the album feel like one complete work.