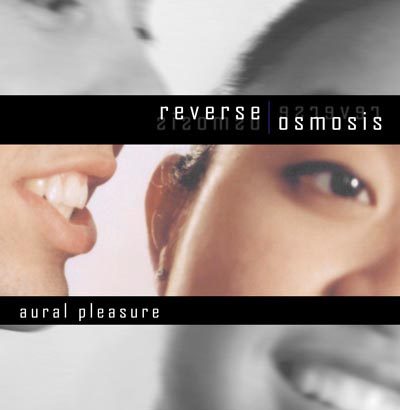 Reverse Osmosis's Aural Pleasure disappoints. There are some enjoyable moments, but if you're not already a fan, this CD probably won't get you there.

If RO could only fix one problem, it should be the pairing of songs and leads. Beautiful Day, Love Song, Hard to Say I'm Sorry, Breakfast at Tiffany's and Everlasting Love are only partially-met challenges for their respective leads. I am delighted to hear a song reimagined and explored in a new way. But, in large part, that isn't what we have here. Here we have delicate, lyric voices attempting dramatic, belty leads and it doesn't work. It's worth noting that the production on Good Souls gives the lyric lead the edgy quality needed to avoid this trap.

Then there are some questionable musical choices, the most noticeable being Thriller. RO kicks off a slick arrangement with some great energy! The lead starts off just fine, but then DANGER: the song's a drag show by the time the chorus rolls around! When Michael Jackson does a more masculine rendition of a song than you do, there's trouble brewing.

The arrangements have a few train wrecks of their own. Hard To Say I'm Sorry, and Runaround Sue have terribly wrong transitional chords. And with a song as harmonically basic as Runaround Sue, that simply should not happen.

Cut-offs, wide and mismatched vibratos, and overuse of reverb are next on the hit list. And I realize I'm starting to sound harsh so let me mention a few redeeming moments. The lead on Stay is simple and tasteful. The lead on Head Over Feet has a great belt. The lead on Creep, though too soft in the mix, seems perfectly cast to the song.

RO has promise, but they need to better match their group's strengths to their song choices before their CD can be more than a yearbook.

A good studio engineer can do wonders for a group's sound, but he can't work miracles. The engineering on the debut CD Aural Pleasure from USC's Reverse Osmosis provides a lot of polish and energy, but fails to hide the group's shortcomings when it comes to tuning, arrangements, and soloists. RO went to Asylum Studios to record and mix this disc; a smart move for any group in the LA area, as Gabriel Mann is one of the best in the genre. He does great work with effects, with adding kick and spice to tracks, and enhancing the percussion. Unfortunately, it seems that he spent the majority of the post-production on this disc adding the gravy, when the basics needed cleaning up.

The beginning of the opening track sets the tone for the disc: great effects laid over a poorly tuned and unsupported male intro. Autotune could have been used to clean that up some, but no amount of processing is going to fix the slightly wavering tone or the general boredom that comes through. It seems it would have behooved RO to spend more time rehearsing the fundamentals before taking advantage of all the neat toys Gabe has. Hard To Say I'm Sorry and Everlasting Love also suffer from weak intros, but both tracks improve after the song kicks in.

The arrangements are another sticking point for me. Some are quite good, but many just don't fit their songs well. Radiohead's Creep comes off as too rigid. The words on the upbeats from the women trade the original coolness of Runaround Sue for cheesy sweetness. Stay (I Missed You) avoids any real emotional buildup, but throws in a surprising and awkward "bop bop" in its stead. Maybe the biggest offender in the arranging category is the syllable "chang". It's all over the place. It's jarring, ugly, and doesn't achieve the tone I think they're aiming for. I just hope they've gotten it out of their systems on this disc.

The group succeeds with the arrangements when they leave the rhythm to the percussion (which is generally very well performed and produced, even if it might be sequenced and overproduced at times) and get into just wailing on their own parts. Head Over Feet and Good Souls both go along these lines, and are among the more successful tracks on the album. Good Souls, especially, makes great use of longer lines, intertwining and releasing against each other. Check out the contrasting vowels in the first half of the chorus and the resulting energy when they hit "ah" together. That track is John Herbert's only turn at arranging and soloing on the disc, and I can only hope he finds more opportunities to do both with this group.

The soloists are rarely amazing, and sometimes a detriment. The soloist on Breakfast at Tiffany's needs to move far, far away from musical theater before he records another rock song. Brendan Jennings' falsetto in the choruses of Thriller is upsettingly out of tune. He does a much better job on Love Song For No One in his chest voice. They would have been smarter to leave the Thriller choruses to Hilary Fraser, who sings the verses, and leave the falsetto gag for live gigs.

There are some awesome moments. The funk background for Thriller is hot. Everlasting Love has stellar drive. Hard to Say I'm Sorry and Good Souls have some nice emotional attachment. The group has a lot to work with, but still a lot to work on. Stay with Gabe, but do more of the polishing yourselves before going to him.

Reverse Osmosis, a coed group from the University of Southern California, makes its recording debut with Aural Pleasure. Although promising, this premiere fails to take risks with dynamics, arrangements, production, and soloists, making it an altogether unfulfilling experience.

Still, Aural Pleasure is heading in the right direction. The arrangers, mostly pulled from the group itself, have a good command of transcribing music from the original to voice, but are afraid to experiment with nuances that could only accentuate the rather mechanical feeling of the exacting percussion and to-the-beat background. I would have liked to hear something different from the recognizable vocals and instrumental lines of such favorites as Hard to Say I'm Sorry and Stay (I Missed You). One good example is Az Yet's (and moreover, the ICCA award-winning arrangement by the University of Michigan's Compulsive Lyres) version of the beloved Chicago tune, with a solid understanding of the voice's ability to stand on its own as an instrument rather than trying to imitate a familiar tune.

On some tracks, it's hard to discern the lead line due to the heightened volume of the background vocals. Soloists, for the most part, are average. Sue Connors, Jon Byron, and Ngoc Hoang deliver notable performances, although they are still too concerned with sounding like the original artists. Thriller is a striking track with a powerful background that deserves mentioning; however, the lead vocals leave much to be desired. Overall, weak dynamic changes, poor tuning, harsh sounding syllables with hard vowels, and an underdeveloped blend, combined with powerless vocal percussion make this album only slightly above average.