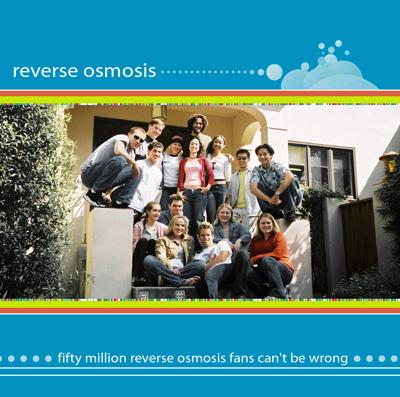 The latest release from USC's Reverse Osmosis, Fifty Million Reverse Osmosis Fans Can't Be Wrong, makes some good steps forward from their last release. Aural Pleasure sounded like a mediocre group recording with a great engineer. This disc sounds like the group has improved their own skills so they are better matched for the work that Gabriel Mann does on the tracks at Asylum Studios. The disc is still peppered with various weaknesses, but in all, the group is clearly getting more solid.

The arrangements and song choices have both improved. No longer giving flat performances of songs that are beyond their reach, they have stepped up their performances and picked songs that work for their sound. With an increased ability to rock out, Livin' On a Prayer and Say It Ain't So come across with good energy and confidence. Although the transition of soloists on Livin' On a Prayer is still a bit awkward, it is clearly more successful than the transition on Aural Pleasure's version of Thriller. The arrangements are also more interesting and better representations of the originals than on the previous disc, and that is entirely due to the increased skills of Jon Byron, who arranged every track but one, with some help from fellow group members on three.

The soloists have also improved from the previous release. They sound grittier, more emotionally committed, and more rocking. Few leads are real standouts, but even fewer sound weak or mismatched to the song. The four leads on Table for Glasses, along with good support from the block, give a great emotional and dynamic build.

There are weak points to work on, though. Tuning suffers in the lead on Ugly Girl, the soloist predictably loses his strength on the high parts of A Little Respect, and the leads on Groove Is in the Heart sound more like karaoke performers than dance-music leads. But that can likely be attributed to the song choice, which was one of the weaker choices on the disc. I love the song, it's probably a blast live, but it gets annoying on CD. Your Body Is a Wonderland comes off sounding to sweet and cheesy. And although Nintendapella is ok for a novelty song, it is grating and placed right in the middle of the disc.

But my complaints on this disc are fewer than on Aural Pleasure, and I am excited by RO's clear step forward. I look forward to hearing them grow more on their next release.

I have a problem with those bent on self-aggrandizing, and Reverse Osmosis gave me the perfect set-up for a biting retort.

But the fans aren't wrong.

Fifty Million Reverse Osmosis Fans Can't Be Wrong is a great album. I had more fun listening to this album than any other (a cappella or not) this year. Strong production, vocals, percussion, and arrangements...the group (especially Jon Byron, lead arranger and producer) has a reason to celebrate. Their love of singing is evident. I want to perform with them some day.

It's hard to believe that this same group received a 2.7 for their album Aural Pleasure a year ago. What a difference 365 days makes. With very few exceptions, this is a top-notch disc, but those exceptions are quite annoying.

Livin' On a Prayer is a blessing and a curse. Sound wizard gabe mann has created a nice soundscape which the soloists do not use to their benefit. Sue Connors and Byron's over-enunciation and hyper-vibrato kill what could have been the best track on the album. This is the only track on which the soloist doesn't completely shine. The rest of the album is tailored voice to song almost flawlessly.

My fears for an average album were seemingly justified at my first listen to I Believe She's Lying. "What is this mess?" I thought. I'm still not positive that the internal tuning is right at the start, though the song is now a favorite. Expect to hear a lot more from the amazing Brendan Jennings. If Jason Monma's tonguing isn't ALL digital, then he'll have a great career as a drummer. Man, he spits very, very fast.

Unusually, the men are the strongest soloists in this group (Monma, Jennings), but Kathryn McGowan's take on I Can't Make You Love Me and her stint on Groove are inspired.

I don't know what's in the water, but singing video game and cartoon theme songs has become de rigeur. In my biased opinion, THV's Mario/Zelda medley is the best, but RO's Nintendapella fares well. The change in vocal processing for each of the segments, while creative, exposes the slight tuning issues the group has.

Well-recorded ballads are my weakness. Table for Glasses is haunting and captivating. If I selected BOCA or CARA nominees, this song and I Believe She's Lying would be the front-runners.

Groove Is In the Heart is one of those songs I've heard too many times done poorly. So I listened with some trepidation as track 10 rolled around. It starts out cheesily, owns land in Wisconsin and jets regularly to France. Yet, it is infectious. Brick House, Work It, Gossip, Bus Stop, Dirrty, Jenny from the Block, Lady Marmalade, Shoop, Everybody Dance Now, and Never Gonna Get It all make remarkable cameos. There is a bit of fuzziness in the sound similar to the unadorned parts of Nintendapella, but the arrangement and trio of female soloists more than make up for it. In fact, that trio has the most seamless blend of unrelated singers I've heard in a long time. I had to ask to find out their parts because there are no discernable breaks in the vocal lines.

I'm all for paying royalties on CDs now, but I wish RO had included original artists on their track listing. I'm too lazy to actually find out who originally sang my favorite track Ugly Girl.

Here's to truth in advertising!

It's good to know at least one group has read their RARB review and used it to churn out an album far superior than its predecessor. Reverse Osmosis' Fifty Million Reverse Osmosis Fans Can't Be Wrong is not quite an excellent album, but with the continued production supervision of the a cappella (Gabriel) Mann of the Moment, I'm pleased to report that Fifty Million is leaps and bounds above last year's Aural Pleasure. I really wanted to be able to give this album top marks, but amongst the few exceptional pieces are some unfortunate duds.

The arrangements are still hit-and-miss. A killer Livin' On a Prayer kicks off the album. I love the energy, bounce, and power that the opening bass and percussion give the tune, but there are some stylistic choices that detract from the total likeability of the piece. Sue Connors' harmony on the refrain takes over the melody from Jon Byron. There's nothing wrong with either singer; in fact, Jon makes a great Bon Jovi, and I like Sue's wailing near the end. I would have loved to hear him take the spotlight on the whole piece. An instrumental section in the last quarter of the song before the modulation that I can only describe as arranged scat is great rhythmically, but some of those syllables just make me scrunch up my face in deep question. There were too many consonants that took away from the essence of the intended sounds.

I was skeptical to hear the John Mayer piece, but I was utterly impressed with the treatment of the guitar part. Without being overly complex, the bass and percussion provide a nice component with the higher parts adding rhythm and texture. I like that the voice parts aren't battling each other to be heard, and that the staggering of female and male voices keeps the background interesting. The soloists aren't stellar, but are a heck of a lot more rehearsed and polished than those heard on the last release.

Gabriel Mann's magic touch is evident across the entire album, adding strength and clarity to the song quality. I didn't fall head over heels for I Can't Make You Love Me, but damn, when that bass and percussion kick in at the fifth measure, I practically melt to the floor. I also had some issues with the consistency of the arrangements and their treatment in the studio. Some pieces feel almost glee club-like in their simple syllables and use of lyrics in the background. A Little Respect is the most criminal of these tracks, with "doom doom ba-dabba" repeated as the chords progress predictively in the opening verse. It's also easy to hear the looping of the various vocal elements in this song, although admittedly it gives polish to the otherwise sloppy intro. There's a weak blend in the female voices at the third verse as they sing the lyrics under the solo. While this is one of the weakest songs on the album, it's representative of the major issues going on throughout Fifty Million.

If we awarded points in the category "listening to RARB reviewers' advice", Reverse Osmosis would get a 5. The pairing of soloists to songs is more appropriate and complementary than on the last CD. What's more, the songs feel more emotional, less mechanical, and far more human than the hollow-sounding tracks on the debut. I like the mix of lesser-known and popular tunes; Table for Glasses is sweet and melodic with a persistent energy despite a slow beat. This group is definitely on the rise, so those fifty million Reverse Osmosis fans aren't wrong at all.