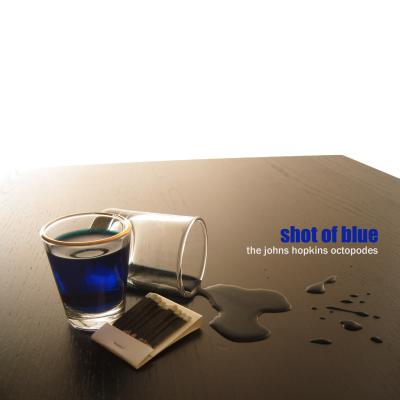 The John Hopkins Octopodes are the junior varsity team of alternative a cappella — pretty darn good, but I'd rather send in Stanford Harmonics or Off the Beat if I had only five seconds left on the clock. They have the fundamentals — creative syllables and interesting arrangements, generally strong ensemble singers, an unconventional tracklist. But without the star power of their more celebrated peers, the Octopodes are left with a lot of well-sung tracks without the leads to pull them off — a better situation than many groups find themselves in, but a frustrating one nonetheless.

Shot Of Blue is a generally unhappy album — this is a tracklist where the soloist on one of the more "upbeat" songs exhorts his beloved to "let him rest in pieces". But the angst largely works — the Octopodes' ensemble sound is quite strong and the group has an innate sense of how to create mood and drama, particularly effective on the openings of White Flag and Spark. Tragic Kingdom was a well-deserved pick for BOCA, with a jaunty soloist and well-orchestrated arrangement; it almost makes up for the inexplicably awful Bring Me To Life, a previous BOCA pick that was the worst a cappella version of the song I've heard and probably the worst song on the album. I also loved Breathe, which was a welcome gust of air amidst all the moodiness, well-executed by both soloist and group.

Some reordering might have helped Shot Of Blue a bit — its weakest tracks are loaded up first, leading this listener to start tuning out before the good stuff started pouring out of the speakers. Generally, the Octopodes soloists try a bit too hard to emulate the original artists, coming off at best a bit pretentious-sounding (Like A Stone) and at worst just comedic (the distinctly non-rocking verses of Running Away). Effects may or may not help, depending on circumstances — the choruses of Running Away improve immensely by multi-tracking and digitizing the lead, but I found the mix on Spark disembodying the soloist from the group a bit too much. Given all of this, it's unsurprising that the earnest performances on Rest In Pieces and Breathe stood out for me the most.

This is a good album, and the Octopodes are a good group. Shot Of Blue may not have any moments of real magic, but it made me want to listen to it again — which is accomplishment enough.

The Johns Hopkins Octopodes are undeniably talented. Shot Of Blue is one of the most overall well-balanced and tightest rock/pop a cappella albums I've heard in the past year.

Octopussy, the group's prior album (which I did not review for RARB), featured tentatively mixed bass and percussion, chordal and mixing imbalances skewing toward the upper voices, and other distracting effects. Shot Of Blue reveals a group vastly matured and an album that is bold... yet smooth.

Most noticeable about Shot Of Blue is its sparkly clean sonic polish, its soloists, and its excellent bass/vp mixing.

The studio work and production are top notch, comparable in quality to much of the work I've heard from the mighty hands of Gabe Mann and Bill Hare. Intonation is nearly perfect. The blend is as smooth as a baby elephant's backside; each background line is wisely sung by very few singers and then creamily compressed beyond any possibility of tonal clash. Moving background lines are accented at just the right volume and right moments. The elements of chords that I most wanted to hear were supplied on cue. The album's bass lines and percussion kick ass, though neither sounds remotely human. The low notes and kicks are well rounded and nicely separated in the mix. The group shies from tonal effects like distortion or deliberately bad eq, preferring instead to sing with warmth while pouring energy into dynamic background vocal lines.

Soloists are Shot Of Blue's relative weakness. Many soloists strive audibly to mimic the original artist, and many do it too well. Like A Stone is believably Chris Cornell-ish (a tough voice to match!), Bring Me To Life is passably Amy, White Flag is darkly Dido, Spark is sensuously Tori, Breathe is teen pop Branch. The soloists on Even Though sound exactly like the songwriters. In the process of aping artists, though, these soloists subjugate their own vocal uniqueness and sacrifice the personal charm that a new voice can bring to a familiar melody. More importantly, their sensitivity is a mere imitation of the emotion of the original artist; soloists who identify with a song will breathe a new life into it.

Shot Of Blue feels like a work of quality. The Octopodes set an example for all collegiate a cappella in recording an album of reasonable length, engaging and complementary song choices, and interesting track order. The group is within a tentacled grasp of joining a cappella's pantheon of collegiate greatness. My playbook recommends cultivating some knockout soloists and taking some artistic risks ala Tufts Beelzebubs or UPenn Off the Beat.

2005 marks the Octopodes' fifteenth year in existence. Yet Shot Of Blue is only their second album released, and their first album recorded in a studio. Since the Octopodes are recording novices, I expected to hear their inexperience. I expected to hear tuning issues, balance troubles, and too many effects. But I waited for problems that never came. And while I was waiting, I heard ingenious arrangements, gorgeous background parts, and seamless audio engineering. I heard fifteen years of ideas, a cappella movers and shakers, and collegiate energy coming together to make one heck of an album.

The Octopodes have a hallmark wall-of-sound style that becomes the foundation for Shot Of Blue. You'll be surprised how well this beautiful technique works with the edgy performers covered on this album. Forget the sounds you have associated with Audioslave, Evanescene, Tori Amos, and Saliva. The Octopodes deliver a fresh approach to these admired artists. With mouths that must be on hinges, the Octopodes snap open vowels, hitting words hard and fast. They consistently take dynamics to the extreme, and blend so precisely that registers blur, genders blur, and there blurs as well the line between amateur and professional a cappella.

Bring Me To Life and Tragic Kingdom appear on back-to-back BOCAs. Being good enough to make BOCA twice with tracks from one album is definitely impressive. But the really notable aspect is that more Shot Of Blue songs could continue to grace BOCA. I'll discuss my two favorites.

First, the haunting rendition of White Flag stops time. This song contains such sensitive subtleties. In the dramatic opening you'll hear voices pulsing like hearts. When the Octopode orchestra turns at "And when we meet" you'll hear how much this song means to the group. By the end, you'll hear and feel a bit of everything. The Octopodes build their gratifying musical prison around you until you're trapped. If soloist Marian Smith is going "down with this ship", then we're happy to go with her.

My humble congratulations to all-in-one man Michael Vu. Michael arranged nine of the eleven songs, co-authored Even Though with fellow Octopode Shivank Gupta, percussed for every track and handled most of the recording and mixing efforts. Michael graduated in 2004, and I hope he'll use Shot Of Blue as his portfolio for future work.

Order "Shot of Blue" online at A-Cappella.Com or email the group at octopodes@jhu.edu for ordering information.