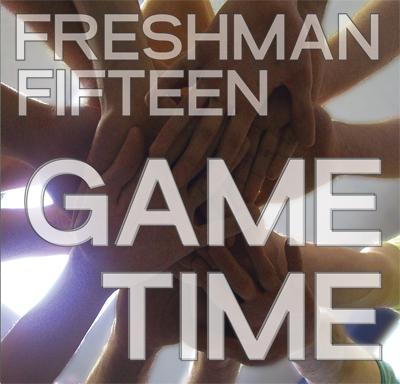 The Freshman Fifteen of Northwestern University were kind enough to send me a letter explaining their approach to their album Game Time, so I figured poaching some of their words for this review was within the rules. The group takes a purist approach, having "completely turned [their] backs on effects"; the result is essentially a close-miced version of the group at a spring concert. The original text also included "well-mixed" in the adjective list but I'm going to have take issue on that one.

Freshman Fifteen claims they "just have too much fun using their voices as voices" to avail themselves of good transcribers and savvy producers. I share their concern about groups seeking solely to replicate the original commercial releases of the songs they cover. But eschewing studio tricks doesn't grant a free pass to musical credibility. And much of this album is a monotonous, medium-volume mishmash that buries the listener in a bowl of reasonably tuned porridge. There's not a lot here that's particularly bad, but there's not much either that's particularly good.

Game Time mixes a ton of ancient overdone covers that should be retired from circulation (Kiss the Girl, Jessie's Girl), recent overdone covers that should be retired from circulation (Senorita, She Will be Loved), and a few covers that could have really been interesting with a bit more creative spark (The District Sleeps Alone Tonight, Somebody Told Me). Almost all of the blame lies with the plodding arrangements; the Freshman Fifteen are capable if uninspired singers. But covering the electronic tapestries of the Postal Service without studio effects is a pretty risky proposition, and one that requires more wherewithal than apparently exists here. And even on less risky choices the Fifteen don't quite deliver, from a shrill Roxette cover to a busy and unemotional Hallelujah.

Not much else to say, except to clarify one thing — they're "not all freshmen — it's a pun".

Game Time: Not at all what I was expecting, and in a pleasantly surprising way. An unplugged sound (very little post-production), little autotuning, decent soloists, and perky arrangements pep up an overall energetic and playful album. Save for a slow Disney piece and regrettable attempt at emo (The District Sleeps Alone Tonight), it's an okay listen. Though far from memorable, the Freshman Fifteen (and guess how many men are in the group?) have released a nice, neat little package.

I've often commented in my reviews that I like albums like this because it gives me a better feel for how the group might sound live, and the arrangements are entertaining, if not on the simple side. There are no CARA-level pieces among the bunch, but for what the album is, I have a good time listening to Game Time. Amsterdam's bouncy and peppy, Senorita packs a little pizzazz, and Lately's arrangement features a good solo by "Skip" (the men's nicknames are not matched to their real names on the album) and an interesting dissonant background that's only occasionally bland. When the arrangements call for it, the FF achieve an early '90s a cappella sensibility that's not entirely out of place. I particularly enjoyed the background layering on Collide, with a vocal percussion that with a little studio finesse adds a lovely color to the song.

There are a few dismal misses, though. The arrangement of the Killers' single Somebody Told Me is terribly amiss in that it excludes most of the musical oomph and power punch that makes the original so deliciously wild. It almost feels as though a few of the vocal tracks laid down by the FF were accidentally left off the final cut of the track; the background under the verses and chorus lacks both texture and percussion. The ever-popular Hallelujah opens with background block chords that move in half notes through the entire first verse. The solo is reverbed to the point of annoyance as the background switches to arpeggios for the second and third verses, as they change to a repetitive Hallelujah for verse four. At verse five, the song stops and changes into a strange form of barbershop/Gregorian chant that doesn't at all flow with the song. If you can't do something like this better than every other version that's been done (my favorite is Blue Jupiter's off of Ear Candy), don't even think about it. And as with Somebody Told Me, Maria is devastatingly hollow.

But really, for what it is, I enjoyed listening to Game Time. It's got the liveliness and spirit lacking in so many albums of the same production quality, and to their credit, the soloists are pretty good. There's a lot to look forward to as these men venture forth with their next studio recordings, and in the meantime, I'll bet they're a good time in concert.

I'll be honest: there's something very endearing about a male a cappella group comprised of members with ridiculous nicknames. I'll be laughing a long time over Rocktopus and Texass. And it turns out G! Bang and the gang can sing, too. Yep, Game Time is pretty Rosey.

Let's get right to the highlights. Hallelujah is featured on Voices Only 2006. I've heard a few a cappella covers of this powerful song, but F15's version is my favorite. The beautiful tenor lines and desperation in soloist Ducky's voice will completely melt you. I've also heard quite a few a cappella covers of Postal Service songs, and F15 holds their own with The District Sleeps Alone Tonight. G! Bang could easily be an understudy for Ben Gibbard. And Kiss The Girl is full of warm-and-fuzzy charm, with creative instrumentation and precise back-up vocals. The natural percussion is outstanding throughout Game Time, but often too quiet. I hope the guys keep it strong on their next album.

But F15 has some weak points to fix. The assigned average tracks didn't earn this mark for musicianship — it came from a lack of layering in the arrangements and a lack of texture in the production. Simply put, Senorita, She's Got The Look, Somebody Told Me and Jessie's Girl aren't very interesting. The weird She Drives Me Crazy mix-in on Jessie's Girl wasn't their best decision, either. And much like an annoying teacher, I'd like a total "re-do" of She's Got The Look. I think this '80s hit has the potential to kick some serious booty.

Game Time is a lot fun — and pretty darn catchy. Give it a listen.