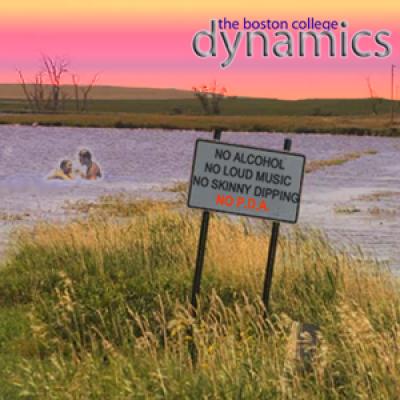 The BC Dynamics' co-opting of the acronym "P.D.A." for their latest album title was likely meant as a cute pop reference, substituting "a cappella" for "affection". But they might have also forgotten that the expression is typically used to describe actions that the general public would prefer to be kept behind closed doors and away from innocent eyes (or ears). It's an unfortunate metaphor, suggesting these "Public Displays" are being inflicted with disregard as to whether anyone wishes to watch a public makeout session or hear a weakly sung a cappella set.

Judging by the reviews of their previous album No Service, the Dynamics haven't learnt a lot in the past few years. There's just no excuse for putting out a fourteen song album that can't manage a well-tuned stretch of more than five to ten seconds. Either practice more, spend more time in the studio, or do both. Without the basics in place, they garner no credibility. The Dynamics also don't do themselves any favors with their arranging, managing to swing from overly busy to overly boring (sometimes within the same track). In particular, they emphasize soprano voices far too much both in their arrangements and mixing. The result can be total cacophony, as evidenced by the bird chirping in the opening of It's Raining Men or the frantic "oh oh baby oh no I want you back" in the verses of I Want You Back.

I found the album's tracklist to be pretty uninspired, drawing heavily from recent greatest hits of collegiate a cappella. The men are typically assigned unchallenging baritone solos, whereas the women are asked to tackle Evanescence and Liz Phair with head voice. As a result, the female tracks tend to falter more heavily (although the musical theater take on Smashing Pumpkins was also a low point). Kati Macgregor's breezy Whitney Houston cover is one solo worth notice, redeeming her straining attempt at It's Raining Men. But her spunky performance is far from enough to redeem the track, much less the album.

It's distressing to have to tell the Dynamics to "get a room", but that's unfortunately where this album belongs — in private and away from public view.

Public Displays of A Cappella is the second album the co-ed Boston College Dynamics have submitted to RARB, and my first experience with the group. Aca-enthusiasts are often wondering how a cappella can be so wonderful but hasn't gone mainstream. If the Dynamics are actually going out and displaying the material on this album for the public, I can't blame the population at large for thinking a cappella is a waste of time.

The single word that best describes this album is disjointed. It's all over the place: there's not single vision, parts don't meld with each other, mixing and editing is sporadic at best. Needless to say, the final result isn't very good.

The most consistently poor aspect of the album is blend. It's awful. There is no blend within parts — anytime there is a vocal line with more than one person on it, it's apparent. Blending between parts isn't any better. Vowels, enunciations, dynamics, feeling, color, timbre; there is no unity. Blend would be served well by singing in tune, which the Dynamics rarely do. Worst is anytime there are duets. A standout example are the duettists on Dosed. Neither are very good, but stick them together and the result is abject misery. Soloists are lackluster. The only performances that left me with any feeling are Matthew Fasano on Fields of Gold, mostly because I really liked his enthusiastic diction, and an all-out performance by Kati MacGregor on It's Raining Men.

I didn't really like much about this album. I found the engineering and production amateurish. There's a big, thumpy, but poorly defined bass line layered with a bunch of indistinguishable mush on top of it, then soloists that are too exposed (especially considering their mediocrity). The mix sounds thin and compressed. Percussion is awful. It's over busy, adds nothing to the album, and doesn't line up with the block on many occasions. Musicality is nonexistent. Ever heard of dynamics, Dynamics? Mood? I guess not. Arrangements are typically overly busy. I Want You Back might be the single worst a cappella track I've ever heard. This arrangement is atrocious. Could there possibly be more going on? The cacophony is overpowering and makes my head hurt. And can groups please stop covering Here's to the Nights? I've never heard a single soloist sound good on this track, including the original. I also must comment about professionalism: here is yet another example of a group not crediting original artists in the liner notes.

Perhaps I go to far. There are glimmers of hope on this album. I liked Like a Prayer, It's Raining Men, and especially the hidden gem Goodbye Earl. On the first two, the energy of the group sold me despite the issues with the actual music. Goodbye Earl I just plain liked, probably for its relative simplicity in the midst of so much busy-ness in arrangements. It had tenderness the rest of the album lacked. Fields of Gold is another standout (and another simple arrangement). I was also impressed by the breath and depth of the altos throughout the entire disc; find a way to bring them out a little more. There's too much exposed soprano; get those notes down where your altos can handle them.

So, Dynamics, back to basics for you. Start simple, master the small stuff, and get a decent blend. You can't hide by adding more parts or more syncopation. You brag about your great sense of energy in your liner notes. Next time around bring it to the studio.

The Boston College Dynamics formula: struggle with intonation and sloppy singing, put a lackluster solo over you, and voila — after eight years, your album still falls short of average. Time for an overhaul.

The album opens with Like a Prayer to showcase the Dynamics' weakest spot: tuning. Almost immediately, in almost every track, the group begins to slide down the pitch mountain. This crisis needs to be fixed post-haste if they want the listener to focus on what's currently being overshadowed — their often interesting, well-crafted arrangements. If this means every member has to sit at a piano and plunk their notes week after week to the point of insanity to hold their own, so be it. I hear great potential in this group, and I'd like to see them shine.

Next, a different production approach is needed. P.D.A. was really recorded at Bristol Studios? Really?! Songs like Tonight Tonight and I Want You Back should sound richly complex instead of cluttered (the soloist on I Want You Back even becomes inaudible at points), and someone should have had the group think twice about singing "I'm a believer, leave it to Beaver" in such a casual manner. A skilled producer might have even been able to save shudder-worthy Breathless. Overall, the sound is muddy and neglected. What happened?

All the same, the group delivered on Fields of Gold. This song lends itself well to a cappella, and Matthew Fasano both sang and wrote a memorable arrangement. Sadly, the song took a brief wrong turn and incorporated a forceful segment of Every Breath You Take, which completely pulled me out of the mood they set. Still, this is a track to be proud of. And P.D.A. ends on a good note with lively How Will I Know. I enjoyed soloist Kati MacGregor's delivery and the group's energetic, happy performance.

But the Dynamics didn't accomplish much with P.D.A.. I hope it won't take another eight years to get solid results.

To order this album please email the group.