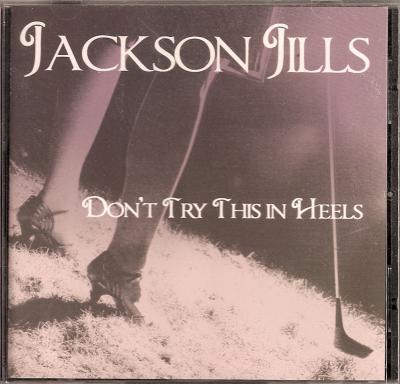 Don't Try This In Heels, the latest CD from Tufts's Jackson Jills, sent me scurrying to my living room shelves to pull out their last release, Headcase. Would that it was to marvel how far the group has come in two years! It was instead to confirm that the former album, which I wasn't too fond of in 2005, is still better than their latest work. Very little of what was problematic with Headcase has been rectified here, and a batch of fresh problems have cropped up as well.

As for the old problems, the opening track teased me with hopes of the more complex and layered arrangements that were lacking last time around, but by the fourth track we were back to the primarily unison backgrounds and/or endlessly repeated syllable hooks and rhythmic patterns that drone on and on monotonously. Bridges pose a particular pitfall for the Jills's arrangers. They consistently let me down by taking a relatively basic arrangement and making it simpler in the moments when they should instead offer new melodic and harmonic discoveries, build the song, and provide momentum toward the final choruses.

Also in the old news category, there is the production work which last time around was good, if inconsistent. There is definitely more consistency to this album's technical efforts but the choices made are not the right ones. Going back and listening to Headcase for comparison, there is an openness some studio folks might call it a "wetter" feel that gave the ladies a rich, expansive overall sound. This album feels much, much drier by comparison and the Jills suffer for it. Overall, their occasional tuning missteps are amplified dramatically by the crisper sound. More specifically, that dryness works against arrangements like Waiting For You and other downtempo tracks that try in vain to create ethereal-sounding backgrounds with a minimum of reverb and other useful effects. Most inexcusable is the bass drum sound that dominates this album, sounding most often line like someone hitting or spitting into a microphone at close range. Headcase featured a similar-sounding bass drum that was of a more natural fit for that mix, but here it overwhelms songs like I Wanna Dance With Somebody and One Way Or Another.

Under the heading of new issues, the biggest issue is the complete lack of energetic singing. This is surprising from a group which puts on a heckuva live show. Plain and simple, the backgrounds generally just lay there: I Don't Wanna Be is thoroughly uninspiring and All For You is flat-out boring. It pains me to say this, but the any enthusiasm these ladies had for recording this album just did not make it through to the finished product. What's more, the energy issue carries over to the soloists too, further compromising the quality of tracks like the aforementioned All For You (where Lucia DePoi sounds downright sleepy). Not helping either are a line-up of primarily alto/mezzo solos who keep the sound bottom-heavy and who lack the requisite power and attitude, to pull off some the material. Liza Levy is a notable exception on Waiting For You where I finally heard someone grab the song by the balls and run with it, even if Liza doesn't quite have the sustained belt to really rock the chorus.

Understand that the harshness of my critique was born from high expectations. When a group I know to have a well-established tradition of excellence turns in a mediocre effort, and follows it up with a further step backward, it's incredibly disappointing. Lackluster is not a word I associate with the Jackson Jills so I'll look forward to their next CD with the hope that they won't give me the chance to do it again.

A decade ago, the female collegiate ranks were dominated by Boston area powerhouses like the Tufts Jackson Jills, Brown Chattertocks, and BU Terpsichore. Not sure if their mojo got stolen by the rising groups in the West Coast and South, but the Jills have been sliding steadily over the past six years I've reviewed them. And their latest album Don't Try This In Heels unfortunately continues the trend.

The Jills make the same missteps here that I lamented on Headcase: repetitive arrangements, lagging tempos, overly simplistic production, and a general lack of conviction in the performance. But there also seems to be a slight decline in general singing quality as well, with some tuning hiccups and inconsistent vocal control among the soloists. Some extra time in the studio might have polished off some of the rough edges, with the electronica songs by Frou Frou and Jem particularly begging for heavier production. I did enjoy I Woke Up In A Car, which had a nice vitality lacking elsewhere on the tracklist. And Love Will Come To You could have been a ballad worthy of the Jills pantheon with some better arranging and production. But there was little here that called out for another listen, especially the regrettable inclusion of snippets of in-studio conversations and joking around on a few tracks.

This a really average album from a previously not-so-average group. We'll see if the Jills can ditch the qualifiers next time around.

Don't Try This In Heels is sadly a giant leap backwards for the ladies of Jackson Jills, a long-standing institution at Tufts University. As with the previous two albums I reviewed, the missteps I hear while listening have more to do with arrangements and less with execution. There's a base simplicity, a sort of emptiness heard in all of the songs. Repetition, hollow voices with missing "tenor" and extreme bass, and not-so-advanced percussion all contribute to this sadly lackluster performance.

Soloists are lovely in that "I'm a female college a cappella singer and I can sing sultry, sexy, and pretty much on key" kind of way. I find very little actual color in the tone of most of the leads, beginning with Katie Porter on the album's first track I Woke Up In A Car. None of it is unpleasant, but the slightly forced, nasal sound somewhat takes away from the innocence of the piece. On Laura McLaughlin's take on this year's everywhere track, Let Go, as with many of the other songs heard here, there's little emotion and individuality poured into the solo. It feels so much like she's just singing to sing — as a listener, I don't feel like she's actually connecting with the music. Jennifer Gates offers an attempt at Gavin DeGraw's I Don't Wanna Be, but as with most women who would attempt the song, she falls prey to singing the awkward male tenor that slightly out of reach for most altos, resulting in high energy levels when she hits the beginning of the chorus and an uninspiring when she gets to "what I gotta do". Cass Norgaisse suffers the same malady on All For You.

Blend and balance is another victim of the Jills' ambition. Solos are almost nearly always buried under instrumentation, and none of it is cohesive enough to sound like a unified piece. However, bits and pieces of Waiting For You show signs of what I believe the Jills's true talents are: sustained notes that mark the chord with the percussion, middle voices, and bass adding texture.

But the biggest casualty of all on the album is energy. One Way Or Another, which done almost any other way could have been huge, powerful, and super-sexy, instead flounders with a boring opener on "jow-wow, jow-jeh-now-wow" and a muted snare drum. Where's the kick, the oomph? Similarly, the punk-pop I'd Do Anything is full of piecy, diluted, and studio-produced meaninglessness. Soloist Jessica Hochstadt nearly sucks the life out of the solo, which instead would have benefited from a power-belter with Hochstadt doubling on a harmony or an octave below. Worst of all, with I Wanna Dance With Somebody starting off-key, it pretty much sinks from the opening note. And one of my favorite songs, All For You, has lost all of its liveliness. It's a disappointing turn for a group who gave me such high expectations after the last release.

It's a long climb up from here. Not at all successful, and not to be taken lightly, this album is a significant turn for the worse in the discography of the Jackson Jills. Though not completely unlistenable, the album is still pretty bad. Maybe for the next album, a few years down the road with some quality arrangers and producers thrown in, instead of heels the ladies should settle for some more comfortable footwear. Anything to bring them back up to the quality musicians I believe them to be.