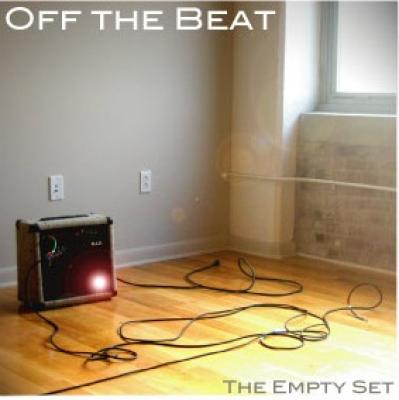 The Empty Set is a cheery new disc from Off the Beat, for all its traditional angst, noise and screaming. The busy arrangements sound upbeat and the soloists sound like they're having fun, even on heartbreak numbers like Let This Go and The Kill. It's rock and roll, more or less, and I like it.

This year's set list reminds me of 1990s-era Green Day — bouncy and energetic, melody optional. The songs sound fresh, without breaking the mold. It's still Off the Beat, with all the busy, noisy arrangements we've come to expect. But there's a wonderful energy to The Empty Set, spanning a good mix of songs that rock and songs that wail.

Anna Molly is maybe my favorite song, just because it's so damn fun, followed by Surface. Both songs feature really terrific soloists — Will Green and perennial favorite Rina Goncalves — and tight Jonah Platt arrangements. Other winners are Miss Murder, starting the disc off on a promising note, and Let This Go, which blessedly doesn't take itself too seriously. Midway through the collection, Mercy on Me stands out nicely from its fellows, with Donna Budica's Fiona Apple-Joss Stone-type soulful croon.

Overall, it's a good disc and more fun than many of its predecessors. I could have done without some of the gratuitous quotes — I am the Walrus, All You Need Is Love and Satisfaction, without even their usual melodies? — but that's just me picking quibbles. If you like this kind of music, you'll like this kind of music. Perhaps even more than usual.

Off the Beat's The Empty Set doesn't have as many transcendent moments as those on phenomenal recent albums Float or Kenophobia, but it is plenty kickass enough. There are still some gratuitous mash-ups (a soprano-led Mr. Big on Dreaming with a Broken Heart), unnecessary distortion effects, and an occasional tendency to over-arrange syllables and rhythms. But alongside these flaws are a crackling energy, consummate professionalism, and an ambitious track list that would daunt even the best of OTB's peers. It's a trade-off I'm more than willing to make to enjoy performances like these.

OTB changes up their style here a bit more often than usual, with generally good effect. Certainly there is some screaming (The Kill, You Know My Name) for those who seek it. But there are also many quieter moments, which historically work best for OTB when simmering underneath with either rage or anguish (or both). For instance, the faux-nonchalant Does He Love You? (replete with a lilting "Music Man" snippet in lieu of guitar solo) masks an urgent sorrow that only peeks out in the closing seconds as the group insistently asks and re-asks the title question. And I loved the textured, swirling menace of Surface, as well as the gentle, layered build to the close of Sewn. The only noticeable misfire was the John Mayer cover Dreaming with a Broken Heart, with an overly earnest delivery that feels misplaced here.

On the soloist front, The Empty Set boasts a lineup of confident sop-mezzos who deliver breathy verses and ably kick into a second gear during the chorus; it's a shame the overly similar repertoire blurs the lines between these women's performances (with the notable exception of Donna Budica's soaring Aguilera cover Mercy on Me). In a reversal from years past, the men of OTB are the ones showing a wide range of personable solos, from Jake Cooper's jaunty Miss Murder to Will Green's cheeky delivery on Anna Molly and Suzie. Whatever Kool-Aid OTB has been feeding its soloists over the years clearly still packs a punch.

It's a punch that the group as a whole delivers as strongly as ever. Pick up The Empty Set for a listening experience as full as you can hope for.

Back and angry as ever, Off the Beat has returned to take your ears by force with The Empty Set, one of the group's strongest releases to date. If you've heard OTB before, you know what to expect. If you haven't, where have you been? Buy this album now!

I mentioned in my review of Off the Beat's latest compilation album Bombtracks that what made the listening experience so special for me was that there wasn't a single weak soloist to be found. Every track featured a lead singer who had skill, confidence, and most importantly, a practiced and authentic delivery. When it comes to separating the amateur from the professional, commitment to the sound is the name of the game. You've got to make me buy what you're selling.

I bought what OTB was selling here. In the interest of full disclosure, the leads on this album aren't as across-the-board polished as they were on Bombtracks, but I'm willing to "cut them some slack" seeing as the latter was a collection of their best work over a span of ten years. The aforementioned commitment to their sound is still consistent, even if the solo talent isn't quite as all-around stellar.

You know who is awesome though? Jonah Platt, that's who. With a hand in ten out of the fourteen arrangements on this album, as well as one of the grittiest solos I've ever heard on a college recording (The Kill, take note, CARA "Best Soloist" nominators), this guy sounds like a force to be reckoned with. Also notably strong is Donna Budica's turn on Christina Aguilera's Mercy on Me, not an easy tune by any stretch of the imagination.

Everything else going on here is pretty standard OTB, which is to say pretty awesome. Their aggressive arrangements, with a little humor and song quoting thrown in from time to time, are as strong as ever. I've never been a huge fan of the Off the Beat percussion treatment, but it does sound improved here over past recordings.

So there you have it, another excellent offering from Off the Beat. If you're a fan, I'm sure you bought this album a while ago. If you're still on the fence, buy it now. This is some of the best rock a cappella that the college scene has to offer. You won't be disappointed.