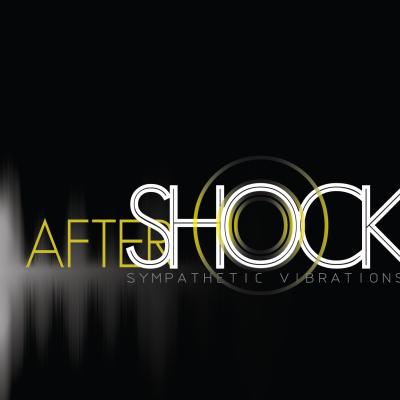 Having not heard the Sympathetic Vibrations's debut album Techtonic, I can't really tell whether their sophomore effort AfterShock represents a true step forward. That said, from the sound of things, they're still a step or two behind the best all-male collegiate groups recording today.

Where the Vibes went very right was in retaining the services of not one, not two, but four different producers to work on individual tracks. With Dave Sperandio, Tat Tong and James Cannon mixing (and one track from Jason Ardell), it seemed reasonable to expect this album to sound technically great — and it does.

Unfortunately, what the Vibes are singing isn't always very compelling. From choice of material, arrangement, or soloist, the word that kept popping into my head was "straightforward". There's a fair amount of similar sounding material here. Some of the very straightforward, logical, predictable arranging is by no means poor, but neither is it terribly entertaining. It just kinda' sits there, sounding as you might expect it to sound.

When the guys do excel, the results are a pleasure. Long Line of Cars and Love's Divine are not my favorite songs and do not feature incredibly complicated arrangements, but the group's tight sound serves them well on these tracks and the arrangements show a development and a variation in texture and voicings that is lacking elsewhere. A few other tracks like Breaking the Habit and (the umpteenth a cappella version of) Mr. Brightside come close to standing out, but here the slick, compact background blocks work against the Vibes. David Hubbard does a standout job with the solo on the former but there's a rawness and edge missing from the arrangement. Ditto for Mr. Brightside, which suffers for its Adam McKinnon solo that is a little short on attitude.

Unfortunately, as the album progresses, the quality gently declines as well. I say "gently" because it's all still good work but nothing stellar. How to Save a Life is a monotonous song that goes on too long (which is hard on a CD of only 10 songs and 37+ minutes of music) and whose most prominent feature is a snare rim-click rhythm in the VP (which is uncredited through the album). Move Along is serviceable enough, but most of the moving parts in the arrangement are moving in unison — again, very straightforward. How's it Going to Be has a nice opening motif, which does well with some dynamic variation, but the song just kinda stays there for 2-3 minutes until the ending which seems to get loud and shouty just because it can.

All in all, this is an enjoyable listen if you're a Vibes fan and an okay listen if you're a fan of the track list. But a fair amount of this material has been done better by others. I'm interested to see what the Vibes do next, as their SoJam win in 2007 demonstrated that they put on a good show and can definitely entertain. Perhaps their next album will earn the same accolades as their live performance, but they ain't quite there yet with this one.

Sympathetic Vibrations's latest, AfterShock, leans to the rock side of pop-rock. Song choices portray a dark, sometimes Gothic quality that can come off as unexpectedly tongue-in-cheek (Soldier Side) or more darkly whimsical (Long Line of Cars) or just bleak (Breaking the Habit, Love's Divine, Mr. Brightside, How to Save a Life, Chasing Cars, or to a lesser degree Move Along, How's it Going to Be). Only the 'deaf, dumb, and blind kid' of Pinball Wizard shows SV's lighter side. It's an anguished playlist. Note for note, that beats out insipid pop any day of the week, but the overall heaviness of the album demands a corresponding step up in creativity and depth. The album falls just a bit short.

Production and energetic leads provide for a good listen, though most arrangements failed to lift the selections to new levels. An exception and my favorite track is Long Line of Cars. The ending is a lovely cacophony of chord clusters and layered faux horns. Mr. Brightside's full-on alt lead is also a winner. The arrangement has a few goofy syllables which don't help the mood, however. How to Save a Life and Chasing Cars's respective leads may be equally good, but the songs are so overdone as to make the task of wowing a listener — at least with these standard arrangements — too steep a climb.

Overall, I would have preferred a little more aggressive pitch correction, particularly on the leads, and a lot more creativity in arranging, especially with these songs. (It bears mentioning that creativity means effective, noteworthy, bold musical choices, not unusual syllable choices.)

While each song makes for a solid selection, the collection as a whole doesn't make for a particularly compelling album. It's possible that in today's iPod playlist world, few listeners will experience the songs as programmed on the CD. That's a blessing. With some programmed breathing room, Sympathetic Vibrations's energy and talent may just get the presentation space to be fully appreciated.

When pondering my overall rating of Sympathetic Vibrations's AfterShock, I was torn between a "4" and a "5": I had rated exactly half the songs "4"s and half "5"s. As you can see, in the end I chose a "5" for this album. A single song tilted the scales: Pinball Wizard. I couldn't rate that song a "5" by itself, due to weak moments with the interludes in the middle of the song, but any a cappella group with the gumption to cover a classic The Who song like that, with the quantity and quality of guitar instrumentals that it has, deserves some extra kudos.

Taking a step back now: by all measurements this is an excellent album by a very talented group. I generally believe in listening to an album in the original track order, and I'm especially glad I did so here because I enjoyed the song placement. Many of the loudest/most heavily processed songs are followed by quieter, purer a cappella. That is true of Love's Divine, for example, which follows the bouncy, intentionally raucous Long Line of Cars with the opening line, "Then the rainstorm came over me…" with quiet (non-vocal?) rainstorm sound effects in the background. Love's Divine also has some interesting changes within the song: it starts off with a solo soloist, so to speak, then the backgrounds gradually get louder and louder, just doing "ooh"s, "ahh"s, until well into the song. Then it morphs into a more traditional collegiate a cappella cover, with standard vocal percussion and background parts frequently singing words from the melody in slower time. After that, it changes again, this time into a section containing faster and more rhythmic backgrounds, and then finally it goes back to the original "ooh"s and "ahh"s. Kept my interest the whole way.

Another thing I noticed is that AfterShock starts off with some of the weaker tracks, something not commonly done these days, and saves what I consider the two best tracks of the album for the very end: How's it Going to Be, and Chasing Cars. How's it Going to Be is another quiet song following a loud song. The "buh-de-deh-buh, buh-de-deh-buh, bah-dah-dah" top part is very nicely done — clearly present, but without being overbearing. The main duet part which starts about halfway through the song is also very well done. Some nice dynamic contrast occurs: the song increases in volume all the way towards the end, but then the very last solo "how's it gonna be" is sung quietly at the very end and makes the song stand out. In Chasing Cars, the soloist puts just the right amount of emotion into the song, and the dynamics work kind of like How's it Going to Be: the song builds and builds to the end, then the final bit is sung by a solo soloist. Both tracks will fit nicely on my personal a cappella compilation album.

I very much enjoyed the album. All the songs are very well balanced between soloist, background vocals, and vocal percussion. Some of the songs have very non-traditional a cappella effects, but I found in each case they were not done blatantly and served to improve the song rather than detract from it. However, one of my few complaints is that the album ends too soon! It's only 10 tracks, and just over 37 minutes long. I would love to see these guys in person in a full-length show, and I look forward to their next recording effort.