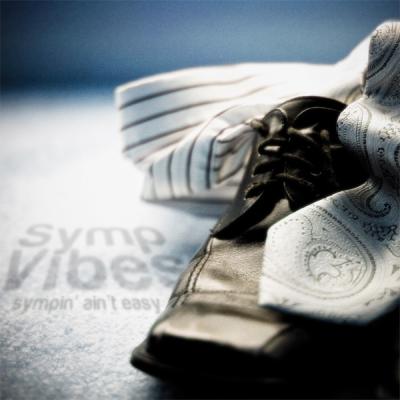 There's a lot of personality on the Symp Vibes' Sympin' Ain't Easy that's bubbling just beneath the surface. Sometimes it rises up to the top — the only gratitude shown in the liner notes is a thanks to "Coke Zero, Red Bull, and the Papa John's delivery guy", which would elicit a knowing chuckle from anyone who remembers a tough semester in college.

Sonically, that goofy personality didn't show as often as I would've liked. When it did, though, these guys are totally engaging. The original song Left Turn Only (OH NO!) made me smile and laugh every time I heard it; there's something so awesome about the energetic way these guys capture the universal experience of bad street signs and being in the wrong place at the wrong time. A listener can immediately tell that the group is having fun performing this song, and that makes it fun to listen to.

On the Bill Withers medley/mash-up of Ain't No Sunshine / Lean on Me, neither song is particularly spectacular on its own, but the combination of the two is intriguing. The mash-up begins a little sloppily, and it took me a while to figure out what was going on, but singing the lyrics of the first song over the melody of the second is really clever, and the last minute and a half or so of the song works well.

Unfortunately, though, the moments that make the Symp Vibes really special don't make up the majority of this album. The other songs range in varying degrees along the "pretty good" spectrum. That's hardly an insult, by any means, but in a sea of "pretty good" a cappella, there's not much to make the Symp Vibes stand out. On the plus end of the "pretty good" spectrum, the album starts out strong with good arrangements/recordings of The Warmth and Believe. In particular, The Warmth opens in a really haunting way that sets a great mood for the album.

On the minus end of the "pretty good" spectrum are songs that have been done before, and the Symp Vibes don't add much to them. What Hurts the Most could have used a more powerful soloist, and the "wee-dee!" backing syllables on Feeling Good really stick out. (Incidentally, Feeling Good is incorrectly attributed to Michael Bublé here; as I've noted before, the song was originally written by Anthony Newley and Leslie Bricusse for the musical The Roar of the Greasepaint — the Smell of the Crowd.) You Know My Name could have benefited from a broader range of dynamics. And finally, there are also some confusing song choices here; in the middle of a block of rock songs, the group drops the contemporary Christian tune Carry Me Through. It's a great performance and arrangement, but it doesn't fit in with the rest of Sympin' Ain't Easy.

Overall, this makes for an uneven album. There's plenty on Sympin' Ain't Easy that the Symp Vibes do well: when they're having fun (You Give Love a Bad Name, for example) or singing their original song, they are a blast to listen to (speaking of which, a special shout-out to their closing track: most college fight songs are kind of lame, but Georgia Tech's is half-fight song, half-drinking anthem, and it's great). But these moments may not be enough to distinguish the group from the rest of the pack.

Sympin' Ain't Easy is a nimble production that piques interest, but fails to leave much of an impression. The music is simultaneously clean and bold, but lacks the next level of depth and emotion that might have made it more memorable. The men of the Georgia Tech Sympathetic Vibrations (soloists in particular) come at you strong, but once they have your attention it seems they don't quite know what to do next! The closer you listen, the less you feel the need to listen again.

This album has such a clean, modern a cappella sound that I was surprised to find that it was produced, recorded, and mixed not by the usual suspects but by group member Prem Midha. According to his blog, this album marks Mr. Midha's first production project. It's a really impressive start! His choice of guitar effects and texture ranks with some of the best I've heard from the a cappella community. In addition, his treatment of percussion preserves a live sound while simultaneously adding studio dexterity, all while excellently matching the groove of each song. I hope Mr. Midha keeps going with his a cappella work — I think he'll have a lot to offer as a next generation producer/engineer.

Though the production is strong, the arrangements lack depth and usually fail to grow. The Warmth opens the album with some very interesting guitar textures, but never expands much beyond the introductory riff. Believe suggests the sound of the Tufts Beelzebubs' version of Boulevard of Broken Dreams (on Shedding), but lacks the inventive layering of the latter, and thus misses out on the ethereal mood. You Know My Name has a thin chorus, putting too much pressure on the soloist to carry the rocking energy (he tries valiantly).

Unfortunately, some of the attempts that are made at arranging creatively don't quite work. The Bill Withers mash-up of Ain't No Sunshine/Lean On Me features an incredibly awkward transition. Singing both songs at once toward the end of the tune only serves to highlight how very different they are in both mood and style. Not a good choice of songs to put together. Mash-up fail.

Though the arrangements lack substance, I have to give credit to soloists for generally going all-out to match the intensity of the originals. These guys don't always have the notes, but I respect that they go for it anyway. It beats the alternative of a wimpy, boring performance.

I think the biggest thing the Symps can do to advance is to flesh out their arrangements for the studio. They've got a real asset in Prem Midha's production, but they don't give him much to work with musically. Sure, the basics are there, but I can't help but feel like this group is capable of creating more exciting and interesting music. Gentlemen, you got my attention, next time I want you to keep it!

Sympathetic Vibrations have put out a very good album with Sympin' Ain't Easy. In many respects I feel it's a better album than their previous one, AfterShock. In the Repeat Listenability category, for example, I rated AfterShock a four overall, but Sympin' Ain't Easy a five. However, Sympin' Ain't Easy suffers from a couple of flaws, which dragged down the Overall rating to a four, whereas AfterShock got a five from me.

More on the flaws later. First, the good news. Sympathetic Vibrations stay mostly true to their rock a cappella sub-genre. They have wailing soloists, kicking vocal percussion, electric guitar effects, and in general sound fabulous almost throughout their album. They do the genre proud, and any fans of both medium-hard rock and a cappella music should not hesitate to purchase Sympin' Ain't Easy.

For the a cappella purists, be warned that there are a fair amount of studio effects on this album, but without exception I thought the effects were very well employed and I wouldn't change any of them. To give you a sample: in The Warmth, there's a pulsed bass sound and a snare drum sound which are rhythm-locked to each other much more precisely than humans could do. I thought at first that perhaps they were supposed to represent a single synthesized instrument, but then noticed they do play on opposite beats sometimes. When they are locked, they sound really cool, though. In Believe, there's a nice electric guitar effect, and a nice "ooh ooh oot" sound that are a tribute to the producer (Prem Midha). The bass in most tracks sounds processed to resemble a bass guitar.

As for the soloists: a large number of songs employ an over-the-top soloist style which involves practically screaming the lyrics at times. Often that works well, to help convey emotion and give the sound a bit of an edge. My favorite such soloists are in Believe (Al Enger), How Far We've Come (Matthew Harrison), and Left Turn Only (OH NO!) (Scott Johnson, Matthew Harrison, Matthew Levine). By the way, kudos to group member Matthew Levine, who wrote that last song! I hadn't realized it was a group-written song until I tried Googling the lyrics to Left Turn Only (OH NO!). Great song! Probably my favorite one on the album. And whoever of the three soloists who had the last line, "Die peach trees!" really cracked me up. (It's a song about traffic problems; there are apparently a lot of Peach Tree Streets in Georgia.) Oddly, though, that screamy style of singing for some reason didn't work for me in You Know My Name and You Give Love a Bad Name, both solos by Al Enger (who also did Believe as mentioned above); hard to put my finger on why.

Now for the flaws: I feel one major flaw is in the song selection. Some of the songs just feel out of place on this album. Carry Me Through, with its gospel vibe, is one. Something Special, sounding like something from an R&B a cappella album, is another. That one sounds particular odd coming after You Know My Name, a full-blown metal rock track. Contrast between songs can be a very good thing — in fact, I praised AfterShock for that in my previous review — but only to a point. Ramblin' Wreck is another out-of-place song. I really love it, traditional glee club harmonies and all... but it doesn't fit on this album. The album would have been a better "album" without these three songs, and with other tracks in their place. How about a nice power ballad? I'm thinking that Extreme's More Than Words would fit this group's character to a "T".

The more serious flaw, though, is what they did to Ain't No Sunshine. That is one of the most classic songs of all time, and as I listened to it I was really enjoying the bluesy groove by the soloist. I was thinking, "Wow, this track will clearly be a five", when they abruptly switched to Lean On Me. And I'm talking ABRUPT! All of the sudden there is a different tempo, different character, much higher soloist, etc.. That is bad enough ... but the mortal sin comes a minute later, when they try to mash the songs back together by having Ain't No Sunshine at a quick tempo and a slightly different melody. Yuck.

To prevent this lengthy review from becoming even more of a ramblin' wreck (ha ha), let me quickly conclude. There are a lot of very, very nice things on this album. I will likely simply delete Ain't No Sunshine/Lean On Me from my mp3 library and continue listening to Sympin' Ain't Easy for many years to come.