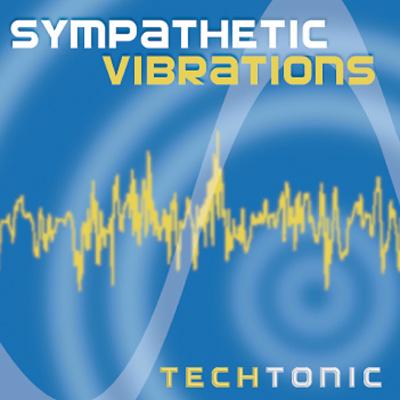 Sympathetic Vibrations' Techtonic puts a few twists on the collegiate sound. They don't shy away from a little distortion and they don't worship at the altar of hip hop. Rock and pop are Techtonic's mainstay, a choice that works for them.

I can't quite figure out what elements of Sympathetic Vibrations' sound are intentional. Sure, pitch and rhythm accuracy are intentional, but I'm talking about a stylistic approach. Here's an example: The Eagles' Take It Easy sounds like it went through a Devo filter. The VP is reminiscent of an 80s-era drum machine and the autotuned oohs seem somehow ironic, tongue in cheek, mocking. Intentional retro twist on a classic? I can't say for sure; maybe just accidental creativity. See also Paperback Writer. Perhaps intentionality isn't that important. Sometimes the artificiality just works.

Well, at least on some tracks. Some tracks like I Don't Wanna Be reveal heart but a distinct lack of groove that is anything but intentional. The cut and paste arranging can clearly yield some spotty results. There's a somewhat repetitive quality to the songs. The group of friends I listened with had a unanimous reaction: "it's ok; it's good. But it needs...more." More what? More dynamics, more dramatic tension, more drive, more active arranging, more changes in texture.

The critique is a little critical, but the CD is an enjoyable listen anyway, though far from a must-have.

In the game of life, there are leaders and there are followers, and the same goes for the game of collegiate a cappella. Certain groups set the bar, raise it, or just ignore the bar and leap tall buildings in a single bound. The Sympathetic Vibrations, however, aren't any of these right now. They seem content to follow on the coattails of what others have done in order to get their name out there. But in their case, that might not be such a bad move right now.

This debut album (from a group that's been around for 7 years) has your typical all-male songlist — Vertical Horizon, Three Doors Down, Eagle Eye Cherry, The Calling, Tonic, and Del Amitri are all represented. I practically can't tell the songs apart, and I keep getting them confused with the countless other versions I've heard. The soloists on these tracks are safe, in tune, and, for the most part, uninspired. But the production does the trick, and very little is glaringly bad.

Some of the other songs, though, were more interesting. Opening the album with The Strokes, and closing it with a hard take of the Beatles, takes some guts. But these were my two favorite tracks — the group took risks, and they paid off. This is a great direction for the group: the edgier fare suits the SympVibes well and would differentiate them from the rest of the male-group pack. Dan Richard's convincing style and attitude on both solos is just what they call for.

All in all, Techtonic is fine, especially for a debut. It covers all the usual male-group bases, and the unabashedly popular choices they made should help the album sell nicely. It will be interesting to see what the group does with the money by the time the next album comes around.

The Sympathetic Vibrations of Georgia Tech are a young group, and it shows on their album Techtonic. Unfortunately their youth is primarily showcased in a host of rookie mistakes, leaving Techtonic as little more than a keepsake album for their friends and family.

Some of Techtonic is pleasantly fine. For instance, the soloist lends Here Without You a wistful, country lilt that I found more poignant than the original. We get a similar treatment on Wherever You Will Go. But pretty only gets you so far, and this listener longed to hear these songs really open up and rip. And no, changing the syllables to "ah" and upping the volume a bit doesn't count.

Overall, the Vibrations' solo work is fairly weak. A number of songs seemed out of reach for the leads as they strained to hit the high points of the choruses. More problematic, few of the soloists seemed to have any personality at all as they droned their way through their tracks (the edgy wailer on Paperback Writer notwithstanding, though I deduct points for the British affectation). The easily forgettable tracklist of late-90s, early-00s pop-rock singles and easy-listening station staples doesn't help matters any. Reptilia is a welcome exception, with an engaging solo and the most consistent group singing on the disc.

What really drags down Techtonic is periodic breakdowns in tuning, the most glaring of which showed up in Save Tonight, the end of I Don't Wanna Be, and the bridge of Roll To Me. These are not mere tuning blips, but "we should probably lay down another track"-type issues. And while most of the album is passable if not perfect, mistakes this big leave the listener on a pretty sour note.

Sympathetic, perhaps — but good vibrations? Maybe next time around.