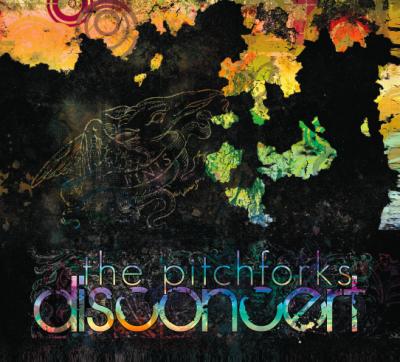 With a burst of energy that completely captivates this listener, the Duke Pitchforks have unleashed an invigorating album of classics, contemporary gems and original pop tunes on their latest recording Disconcert. The album is a strong collaboration between a fantastic group with excellent musicianship and a top-notch production team led by the members of Vocalsource. There are only two flaws that mar total enjoyment of the album for me: the artwork and the inclusion of Calculus one of the hits by that comedic MTV boy band, Together.

Sonically, the album is masterfully tailored. It is pleasing to the ear, but offers enough spark and crackle that each track is worth hearing repeatedly. Having heard several of the songs performed live, I can say that the special magic that makes us enjoy a cappella in the first place is captured exquisitely. Even if I didn't particularly like a song, I admit that it was performed extremely well. For example, the collegiate a cappella world really didn't need another cover of With or Without You, but the 'forks do a great job of putting forth a clean and crisp version of this classic. I don't know how they did it, but it's actually quite moving with an emotional tenderness that harkens back to Bono's original.

The good parts of the album are actually quite exceptional. The opening track Anna Molly gradually builds into a powerful screaming force with a pulsating groove that makes your heart race just a bit faster. There is a commanding presence in Stephen Clark's delivery that seems effortless. He gets it and brings it. I'm completely taken by the softer approach on Marc Broussard's Home. Atlantic and Knights of Cydonia both feature a glorious wall of sound that overwhelms — in a good way.

The two (yes, I said two) original tracks are out of this world. Chris Bryant and Clark give us a deliciously sexy R&B joint called Dancin' Thru that wouldn't sound better flowing out of Robin Thicke or John Legend. The muted trumpets in the background are stellar. And then there is the Joseph Bates and Andrew Booth contribution As You Go. I've heard it described as a "nihilistic vocal opus". While that may be true, it's also stunningly beautiful. I wrote this about the sublime Nevermind on their last album Bring it Back:

"But the crème de la crème, without a doubt is the original song Nevermind by Andrew Booth and Bates. Sublime lyrics by Booth, a haunting melodic structure and soundscape by the duo and possibly the solo of the year by Booth dug in deep. Not simply an earworm song, you may actually carry it to your grave."

So you could call As You Go a "Nevermind, pt 2", which overall is a good thing, and yet it is so much more. The maturity in songwriting is evident as is the arranging and styling of the song that is simply breathtaking. It doesn't have the same emotional rawness as the earlier work, but it does make me ask for more, more, more from this talented twosome.

As I mentioned, the artwork and typography on the CD packaging makes it nearly impossible to read. That's a shame since the concept is strong; it's just that the execution drives me insane. When you are trying to write a review of an album and can't read the soloist's or the arranger's name, it can cause a prickly feeling up one's spine. And the cover of Calculus is just stupid. You can tell the group doesn't put as much energy into making the track as great as the non-hidden tracks.

I would feel highly Disconcerted if you didn't run out and pick up this recording right now.

In many ways, I don't envy the Pitchforks who made Disconcert. After all, the group's previous release, Bring it Back, was by far the top collegiate album of 2006. Following up such high expectations is never easy. Fortunately for the listener, Disconcert delivers.

The Pitchforks are a top notch ensemble. Performances are nuanced and energetic, managing to sound polished yet fun at the same time. As has become the standard, pitch and blend are spot-on. Soloists have talent and confidence and can perform a wide range of styles. Production nears brilliance, especially the awesome percussion.

What really sets the Pitchforks apart is the group's ability to perform such a diverse repertoire flawlessly. The opener, Anna Molly, should be on the syllabus for any budding producer wanting to mix a powerful bass line. Lovestoned is slicker than black ice, mellow and groovy. Even though I'm not a big fan of Death Cab for Cutie, I Will Follow You Into the Dark manages to sound genuine and tight. Make It Rain is entertaining and fresh, some of the best hip-hop a cappella I've ever heard. The penultimate track, Knights of Cydonia, is destined to become the top track of 2008. Raw and powerful, it perfectly marries superb arranging, fantastic singing and dazzling production into an a cappella tour de force. Other than the not quite up to par bonus track, there's hardly a weak track on the entire album.

Not only does Disconcert have two originals, but both are excellent. Dancin' Thru channels doo-wop and classic R&B, and could easily be on the next Stevie Wonder release. As You Go is chilling, haunting, and moving, washing over the listener. These two tracks demonstrate better songwriting than most of what's on the radio these days.

In one way, The Pitchforks are a victim of their own success. "Hysteria" didn't just raise the bar on collegiate a cappella; it obliterated the bar. It was so much better than what I was expecting that I was just blown away. Disconcert is on par with Bring it Back, but having been prepared for its quality and musicality, it lessened the impact.

But I have no pity for the Pitchforks. Competing with themselves still puts them well above most collegiate groups. Getting to hear albums like Disconcert is the reason I became a reviewer. It's rare that I get the opportunity to appreciate an album as excellent as this one.

"Discontent" is an apt term for the latest from the Pitchforks, a bipolar affair that rises from its own ashes to become one of the strongest albums of the year. What begins as a competent romp through well-tread territory ends in a refreshing jolt of audacity. To evoke journalistic parlance, the Pitchforks have buried the lede.

At the onset, we are treated to an enthusiastic cover of a meandering Incubus tune. The agrarian wail of organic "jen"s and "rau"s fights a losing battle against a formidable army of studio toys. Of course, this also describes every Incubus cover I have ever heard. But how else do you cover America's angriest boy band? Speaking of which…

Right on cue, The Pitchforks segue into a hit parade of Justin Timberlake (in medley form, natch), the latest quasi-jazzy hit by whoever happens to be popular right now (Jamie Cullum), and With or Without You. There's also an original track about dancing, a topic that consumes approximately half of all material produced by all-male groups for some reason. The song is a "throwback", we are told, though it sounds essentially like the track before it.

Then, like a light switch, the Pitchforks shift gears, turning their attention to an incendiary cover of Marc Broussard's Home. A visceral thump emerges from a bayou of guttural hums, while Tosin Agbabiaka throws a rusty wrench of despair into his brooding lead. Why it took six tracks for the Pitchforks to show this side of them is beyond me.

After that, the Pitchforks seem to find their groove. A very strong arrangement keeps a sensitive take on Death Cab's I Will Follow You Into The Dark from veering into banality or maudlin sentiment. The Journey cover is appropriately histrionic and ridiculous from the get-go, and the Pitchforks actually manage to succeed at the balancing act known as the a cappella hip-hop cover with Make It Rain.

Andrew Booth and Joseph Bates bring a healthy dose of acrid rain to the barbecue with the As You Go. "Have you found a god?", asks Booth. "Convenient enough… Fill the void as you see fit." Yikes. What happened to happy throwback dancing?

After that heady bit of vocal Seppuku, the Pitchforks spill their guts on the absurdly ambitious Knights of Cydonia. Soloist Mike Silver rewards those who emerge from the bombastic, two-minute intro unscathed with a pitch-perfect lead, and the song just keeps building from there.

In each case, the Pitchforks benefit from some forward-thinking production, great arranging, and well-matched soloists. Ultimately, however, we are left with two distinct EPs. There are plenty of reasons to purchase Discontent; I just wish there were twice as many.