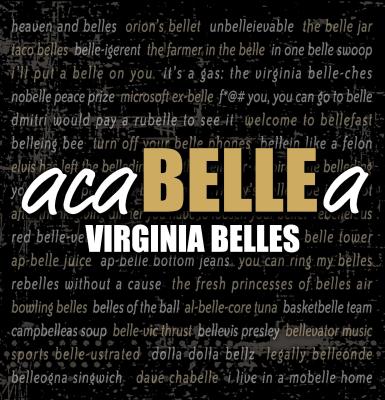 It's not that the Belles are unpleasant to listen to. For the most part, they have sweet voices, decent pitch, and the occasional burst of refreshing spunk. But the Belles are falling short of the a cappella standard being released today, both with their limited performance capabilities and their too-basic arranging style, making acaBELLEa a pretty ho-hum album that barely earns an "average" marking.

On the arrangement front, you'll hear a lot of easy harmonies with the same syllables and rhythmic patterns running through the entire arrangement. Beautiful Day showcases this problem well, with endless "no no"s sung on eighth notes, unless it's time to sing "ja no"s on eighth notes. It's boring. Fidelity is worse, with a persistent "dm dm" line that isn't going anywhere but Boringville. Frankly, there's very minimal creativity on the arrangement front on acaBELLEa, which is probably why the background singers often sound quiet and drained. Give your group something fun to sing, arrangers!

Soloists on acaBELLEa occasionally have the tendency to push too hard, trying to give themselves a deeper, or sexier, or thicker voice than they actually posses. Examples include the soloists on Beautiful Day, Fidelity, and I'll Stand By You. If you can't perform the song like a natural diva, don't try to. An audience would much rather hear earnest singing than forced singing.

On the plus side, there is a standout track on acaBELLEa, and it's a significant standout. Die Alone features a wonderful lead from Vicki Fort, and a huge rise in power from the background. It's sassy, and bold, and definitely memorable. Hopefully the Belles can use this track as a benchmark for future recording endeavors.

With a lot more energy and creativity needed for their next album, the Belles should primarily focus on creating powerful and impressionable arrangements to pump up their singers and engage their listeners.

acaBELLEa is the latest album by the oldest all-female a cappella group at the University of Virginia. In many respects, it's a bit of a puzzle, with some very strong tracks and other very weak ones. Overall, though, I give it a "thumbs up".

Most of the album is fairly standard fare. The arrangements are all pretty "blah"; none really stands out for good or ill. Some of the soloists are pretty good, some are weaker. The background vocals are always pretty good; the largest problems with intonation occur with the soloists. The production is sometimes good, sometimes problematic. In general, the soloists and the production tend to be the difference makers for my track scoring.

The album unfortunately starts off kind of weak, with two of the biggest problems occurring in the first two tracks. Although most of Beautiful Day is good, a snare drum vocal percussion effect ends up sounding more like static than percussion. Fidelity had a more severe problem; in the "breaks my hea-ah-ah-ah-ah-ah-ah-ah-ah-art" section of the song, the soloist's voice cuts in and out very abruptly and unnaturally. It sounds to me like it's perhaps some sort of artifact from auto-tuning. It detracts quite a bit from what otherwise is a reasonably good song. That particular soloist sang with a kind of shaky vibrato; perhaps that contributed towards the production problem.

One of the strangest things about the album's production is that the soloists often seem to have been recorded with a different reverb than the backing vocals. In some cases the soloist's reverb is very minimal. This leads to a hollow, dry kind of sound in many of the tracks, lacking in richness. Many of the soloists sound kind of raspy on their lowest notes. Normally I'd think that was a voice issue, but because the same kind of raspy sound occurs in several tracks it seems more likely to be something to do with the production.

The hollow sound is less marked in many of the later tracks and I really enjoyed a lot of them. If they had eliminated four or five of the first six tracks, reducing it to a nine or ten track album instead of the current fourteen tracks, the overall offering would be stronger. Some of my notes on the last three tracks indicate the potential the group has: "Really good. Good soloist. Good production." (I'll Stand By You), "Production much better than earlier songs. If whole album were like this, it would be an easy recommendation." (Angel), "Still with the better production. Very good song, good soloist." (In This Life). Too bad the whole album wasn't like that.

In summary, my feelings about this album have gone back and forth as I've listened to it several times. On the first listen, I thought it was nothing special. On the next listen, some of the stronger tracks stood out. Next, some of the production problems started bugging me. You get the idea. In the end, as mentioned above, I eventually decided it's a "thumbs up". It's got some quality songs and the album is a fun listen.

Song after song on acaBELLEa, the Virginia Belles show that one of their strongest assets is consistency. Just about every song offers an enjoyable interpretation of the original: precise execution, good blend, and a pretty overall sound.

acaBELLEa is weighted heavily toward more recent songs and female singer-songwriters like Regina Spektor, Sara Bareilles, Ingrid Michaelson, Natasha Bedingfield, Chantal Kreviazuk, and Rachael Yamagata. Throw in Fergie and Alicia Keys, and over half of the album is from female solo acts. It's a solid niche that suites the Belles quite well: their sound, while sweet, also bears an intensity that works beautifully on such songs as Be Be Your Love and Die Alone. Fergie's Big Girls Don't Cry (Personal) works exceptionally well as an a cappella song, and the Belles can even make overdone tunes like Fidelity and Love Song not sound tired.

Such a consistent song choice makes the album feel incredibly cohesive: many of those singer/songwriters have similar styles, which, in turn, make acaBELLEa sound unified and coherent. It goes a long way toward making this feel like an actual album, rather than just a scattered collection of songs.

(As an aside, the Belles should also be commended for their percussion; the album boasts just about as many different percussionists as soloists. It's great to see a group — any group, not just an all-female one — with as broad a talent base for vp as for soloing.)

There are no huge surprises on acaBELLEa: no outstanding arrangements, no unusual song choices, no shocking reinterpretations. Once you hear Beautiful Day, you just know how the rest of the album will sound. That's hardly a complaint, though. acaBELLEa may be more hits than home runs, but those hits are solid, through and through: it's a truly consistent album, the kind where you skip a track only because you don't like the song, not because there's anything wrong with its interpretation.