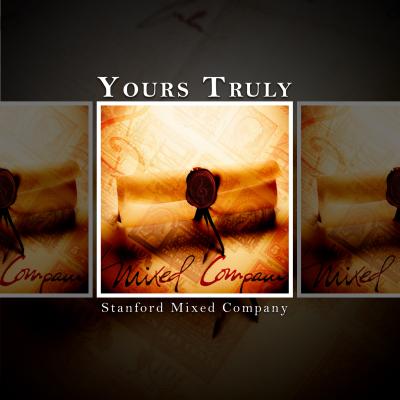 What a treat to welcome Stanford Mixed Company back to the upper ranks of recorded collegiate a cappella groups with Yours Truly, the group's first CD in three years.

What's changed? Well, besides the usual turnover in any collegiate group, the liner notes reveal that some of the Company attended Bill Hare and Deke Sharon's "Soup to Nuts" seminar in 2007. Without sounding like too much of a shill, I have to believe what they learned there — what the group refers to as "inspired insanity" — must get at least some of the credit. More on that in a minute.

First, to the basics: Gone are the rampant tuning issues that plagued Shades of Red. Gone are the balance issues. Gone are the awkward tempos and sluggishness. Instead, most refreshingly, we get — with the able assistance of Charlie Forkish — nearly flawless tuning. Instead, Bill Hare is given wonderful raw material to mix and his nimble touch only brings out the best in the group. Instead, we get palpable energy and solid grooves most of the time. In short, back is the group I remember from the 2000s (The Other Side of Blue), albeit with a technologically advanced sound that befits the passing of a decade.

But perhaps most importantly, it's an absolute delight to be able to praise the inventiveness and creativity of the arrangements on a collegiate album for a change. To my ear, that's where Mixed Company has benefited most from "Soup to Nuts". Gone, in large measure, are the slavish transcriptions that have become the mainstays of many a collegiate a cappella group. Instead, there are re-imaginations and re-conceptions. Heck, when Deke Sharon's arrangement of Apologize (wonderful and effective as it is) isn't the best on a album, you know those student arrangers have some chops ... and perhaps none more so than Daniel Herriges.

Herriges contributes 6 of the album's 11 arrangements, but the ones to really focus on are When Doves Cry and Downfall. The former is ceaselessly inventive, novel in its opening (with a motif that calls to mind birds crying) such that I was unsure if my track listing was correct. The arrangement is ever-morphing and isn't afraid to play with chord substitutions in a manner that engages the listener without being distracting. Great stuff. The latter is just a force of energy that grabs you right at the top and never lets go, even through the gospel section towards the end that explodes into the final choruses. Honorable mention must also go to Patrick Ardinger for his arrangement of Fired which substitutes a vocal jazz feel for the honky tonk/rock of the original, yielding a rendition that is as entertaining and fun as its source material without being a carbon copy.

In the interests of fairness, I do have to admit that the album loses a bit of steam about halfway through. Pretty much everything about the final five tracks is still better than anything on Shades of Red, but Moondance is a bit too busy while Hurt is a bit too simple and repetitive. When In Rome never quite comes together as a fully realized arrangement, with a vocal treatment of the original's country fiddle that comes off more like the whining oboe of a Persian snake charmer. The standout in the final five is I Will Follow You Into The Dark which takes a bare bones acoustic guitar original and fills it out into a lovely, if basic, doo-wop/R&B-infused arrangement.

As you can probably tell, Yours Truly proved to be a very pleasant surprise for me. For those who never knew of Mixed Company or for those who had written them off, it may sound like a cliché but they're definitely back and better than ever.

Yours Truly is overall a few shades stronger than Shades of Red, but with so many of the same problems crossing over from album to album, it may take something quite radical to improve Mixed Company's work and the satisfaction of their listeners. Mixed Company has been a Stanford staple for many, many years. Shouldn't they be at the top of the a cappella heap by now?

Once again, it sounds like the legendary Bill Hare has saved this album from falling into the gutter. Because of him, we're treated to all sorts of cool razzle-dazzle, which gives us something to listen to other than lackluster soloists and mediocre arrangements, but can't hide these fundamental problems. Bill (and this is subjective) occasionally oversteps his boundaries by creating patches of interestingness in no way offered by the singers themselves (as heard on When Doves Cry, Apologize, and Every Time It Rains), but of course interesting patches are better than dull patches.

It's also worth noting that if you're going to cover something classic and very well-known (Moondance in this case), you'd better be able to bring something really fresh to the cover. The ideal listener reaction should be, "Wow, I've never heard a version like this before! How cool!" If you can't make that happen, leave the song alone. Mixed Company really struggles with its interpretation of Moondance, eliciting an "Oh, dear."

However, there are also improvements to note here. Yours Truly is stronger than Shades of Red in the intonation department. As a whole, the album sounds cleaner and more thoughtful than Shades of Red, with much better editing, too. And a few tracks are quite memorable. Fired certainly earns an exclamation point with strong deliveries and great energy, and the continuous build of Every Time It Rains is captivating.

So all hope is not lost, it's just straying. The "Acknowledgments" section of the liner notes is lengthy, and the group writes the album took three years to create. And yet, they're straining for average? Expectations are high for established groups. Mixed Company must use their staying power to blaze new paths and produce higher levels of a cappella goodness that leave fans wondering, "What will they think of next?"

The choice of songs for Yours Truly is a confusing one: for every unique or unusual selection (Nickel Creek's When In Rome, Death Cab for Cutie's I Will Follow You Into The Dark), there is an obvious, overdone tune to match (Moondance, Apologize, When Doves Cry, No One). Therein lies Mixed Company's downfall: those more common tunes are among the weakest on the album, giving all of Yours Truly an unsteady feel.

The group's weakness can be traced back to soloist choice: there's no passion or spark behind most of these songs. The soloist on Moondance doesn't capture the swagger or sex appeal of the original (while the liner notes credit the song correctly as a Van Morrison original, the tray card shows only Michael Bublé's name). The soloist on Hurt sounds more focused on hitting every vocal run than on conveying the emotion behind the tune. And on note-heavy songs like No One, the soloist emphasizes each and every note, creating an effect that is difficult to listen to; those runs of "no-one-uh-uh-uhuh-one" just beg for some elasticity and give, instead of hammering each note with the same force.

If Mixed Company could work on one thing for its next album, it's passion. This is a group with nice blend and good pitch, but without much feeling. The album-closing When In Rome just doesn't have the angst and intensity that the lyrics call for, even though all the notes are there. When Doves Cry feels like an over-repetition of the song's chorus, without ever connecting with the words and emotions beneath it.

This is a group that shows glimmers of true personality and uniqueness: the scat segment in Fired is enjoyable, and the group's melding of the tender I Will Follow You Into The Dark with a clip from I'll Fly Away works to give the song a haunting, somber effect. But those moments are rare on a disc that is otherwise average: I wish these singers could loosen up just a little bit and show a little soul.

On an unrelated note, major kudos to the folks in Mixed Company for this sentence in the liner notes: "All tracks have been licensed through the Harry Fox Agency for inclusion on this album." This is something that we expect from all groups who perform covers, and it's great to see a group acknowledging that it is compensating the songwriters of these tunes.