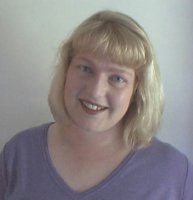 I'm 28 years old, and I live in Canberra, the capital city of Australia, with one husband, two daughters and three cats.

I've been the musical director of Brindabella Chorus for 10 years. We are a 45 voice women's a cappella chorus that sings in the barbershop style, and we are a chartered chorus of Sweet Adelines International (SAI), an international women's barbershop with 30,000 members in many countries.

I'm on the national Education Faculty for SAI, which means that I visit other choruses around Australia and provide coaching and education. I've also coached a few local groups, including arranging backing harmonies for a local rock band. I regularly teach short courses in women's a cappella singing for the Canberra Institute of Technology.

I had a short stint in a country and western band, and also work occasionally as a Karaoke host, which is actually a lot of fun so long as you dont expect much quality singing! Every now and again someone pleasantly surprises you!

My musical plans for 2001 include listening to LOTS of a cappella CDs (!), attending a cappella workshops around the country including one in June which will have about 700 attendees, teaching music to kindergarten classes at my daughters school and helping out the senior choir (who need it!), keeping my chorus on track and learning, and forming a new quartet ready for the next National Convention and Competition in June 2002. Oh, and sleep sometime!