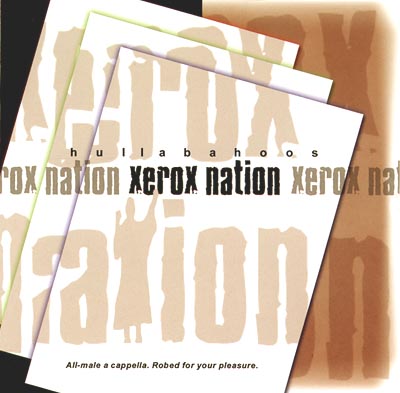 The Virginia Hullabahoos' Xerox Nation maintains the quality and style that made 8ch, their previous effort, such a consistent, enjoyable treat (and one of my favorite men's albums).

There are no hidden tracks to be found here, no inside-joke studio hijinks, no medleys, no novelty tracks. This album is flat-out contemporary collegiate a cappella at its best: great arrangements of great songs, sung well — a simple formula that's not so easy, but a formula that the Hullabahoos employ with precision and reliability.

Outstanding arrangers include David Sarratt (Let's Get It On), and the team of Mark Dreusicke and Will Gross, who alone or together account for more than half the arranging credits, as well as a good portion of the solos.

Production-wise, there was nothing fancy and little to fault, other than some solos mixed a tad too soft.

Overall, another winning album from an award-deserving group.

The chicks must love these guys. I can just see their concerts...current chicks swooning, future chicks planning, past chicks regretting. Why? Because they're a bunch of guys singing romantic pop ballads. And not just singing them. They're singing them well, with uber-smooth blend, mostly-good tuning, and sincere, capable soloists. Good stuff to win over the ladies, or to remind them why you won them over last year.

There's only one problem...what if you're not looking for swoon-music? Well, then you won't be looking for this disc.

Looking at the track list, you might not guess that the CD is as ballad-heavy as it is. But The Hullabahoos have a tendency to run more upbeat tunes through the ballad filter, removing some of the kick from the original. Vertical Horizon's Everything You Want, for example, sounds great, but loses the snap I'd like to hear in a flood of long, sustained sweetness.

This effect is due, largely, to the arrangements themselves, which favor vertical, sustained blocks and don't place much importance on the bass line, which is most often quite dull if it's audible. So the VP becomes the sole rhythm section of the group. And while it's quite solid throughout the disc, it's not enough to supply the kick necessary to keep all the tracks from blending together.

The final track, Faded, shows that the group is, in fact, capable of delivering a groovier performance. The energy is high, although I don't think a lack of energy is the main cause of the subdued tone of the disc. Of all the uptunes on the disc, this is, by far, the most successful, as a result of the attitude — the snap. The track is tight and sharp, and is a great listen.

As long as you're cool with easy-listening swoon music, there's much to be commended here — tight tuning, smooth blend, and solid soloists. It is for these above-average attributes that I couldn't bear to give most tracks less than a 4. If you want something a little snappier, aim elsewhere.

The Hullabahoos are one of the tightest, cleanest collegiate groups around, as their latest album Xerox Nation clearly demonstrates.

Great voices, full-sounding arrangements, and an excellent sense of rhythm (one of my favorite soapboxes!) make this album pleasant to listen to. It features a good mix of new and classic songs, all faithfully reproduced.

Perhaps my only real complaint about this album is that it's a little monotonous, a little heavy on the groovy, smooth ballads. I mean, they do them really well, but I could stand a little more beat in between to wake me up.

The Hullabahoos like long albums, seventeen tracks in this case. This is understandable in such a large group; everyone gets a 'turn', and there is the point of view of getting plenty for your dollar. There's only one track here that we could have done without — I didn't really like Summer of '69 when Bryan Adams did it, and I'm afraid that Jeremy Pelstring didn't do it a favor. He's a good singer, but he really doesn't suit the song.

I would love to see this group relax and put a little more originality and personal flavor in their future albums. I like the Hullabahoos, I like their music, and I appreciate their great voices. Xerox Nation is a good album, well worth owning — it just didn't rock my world.

Current ordering information can be found on The Hullabahoos' web site.