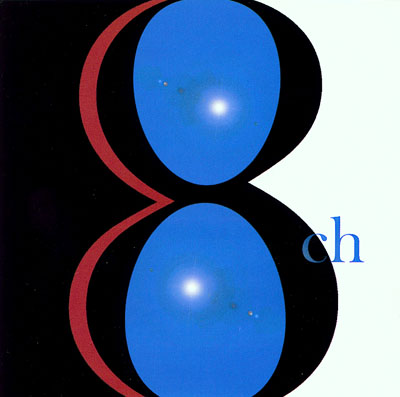 New school has become old school, but it still sounds refreshing on 8ch, the new CD from the University of Virginia Hullabahoos. Top 40 radio isn't new on the radio anymore, let alone in the a cappella world, but it's a treat to hear an engaging group of college men bringing fresh energy anyway.

Seal's Crazy is the perfect opener for this disc. It's a little too fast, a little too white, and not quite danceable — perfect in its context. The song also has a crisp cleanness to it, perky energy and a competent solo. The Hullabahoos' sound is a little too collegiate for perfection; a certain baritone rasp colors all the chords. It sounds like an inability to alter the pop-vocal sensibilities that serve the solos so well. But this isn't really a weakness in this context.

8ch is a collegiate album, and a fine one at that. It's a tribute to the Hullabahoos' charisma that they can transform a Dixie Chicks song (Wide Open Spaces) into the same sort of light rock that the group borrows from Marc Cohn and Maxi Priest. The entire album could be a playlist for a soft rock radio station: "No hard edges, play it while you work, all of your favorites". As with that sort of play list, only about half of these songs held my attention. But The Hullabahoos are competent enough that I can't fault them for half an album of filler.

The first nine tracks are far stronger than their successors, except for the late-album, R&B polish of Because of You and Lionel Ritchie's You Are. But the whole album makes for a pleasant listen, and fans of the genre will not be disappointed.

Hang on, 'cause I have a whole hellabalot to say on the Hullabahoos' 8ch.

The good stuff: The blend, the mix, the solos, the bass (only one? Seems like it. Wow!), the high registers (you'll swear Mike Mewborne is a woman at first — sorry, Mike).

The less-good stuff: the length of the album and the similarity of arrangements.

Aided by talented producers and/or engineers (I'm guessing from the "thank-you's" that they're Paul and Lyn Briar, though they're not credited expressly as such — a shame, since they did a helluva job.), The Hullabahoos have fashioned an album as slick as anything I've heard from the college ranks in recent years. Where their gift for ensemble singing ends and the studio wizardry begins is a test for live performances, but these Virginians offer up a blend that's pure butter.

In the "welcome change" category, there is not a single "cringe" track on this album — not a single song that is either so poorly arranged or so badly performed that you're left wondering if the soloist's parents gave money and that's why his song was included. That said, this album is way too long. But wait, didn't I just say all the tunes were at least good? Aha! While I'm happy with a good album, I'd prefer a great album. And what prevents this album from truly realizing its potential is the volume of music it tackles, and the sameness of approach to said music.

It seems the Hullabahoos have never met a medium-tempo, romantic ballad they didn't like, and even if a given song doesn't quite fit that mold, by the time they're through arranging it, it will. Witness the highlights of the album: Don't Go Away, I Want It That Way (fabulous, but why?!?), Close To You, Angels, Could Not Ask For More — all songs that are well served by shimmering verticality in the background chords, coupled with a mellow bass line, tasteful v.p., and a sweet solo. Now consider Get Into My Car, Easy Lover, and Can't Go For That (as well as a few others), each of which have a more unique "feel" and require a bit more creativity than is offered in their arrangements here. Sadly, once filtered through the prism of milquetoast pop that's favored here, these songs lose their distinctive characters. I would have been happier with an album of half this length.

In short, had I heard 19 tracks that matched the groove of the arrangement and solo on Sex You Up, I would have gladly gone out into the streets and sold this album personally. As it is, I think it's a great buy, if a tad too vanilla for my tastes.

The Virginia Hullabahoos enjoy some rare qualities in a men's group. Their high tenors are exceptional, adding nice blend and tuning to nearly every track, and all soloists deserve their place on the album. I would more easily chastise the group for recording so many tracks (usually a recipe for disaster) if there were any clunkers in there. Luckily, there are not. Overall, 8ch is an impressive and enjoyable album, with little to fault.

Of particular note is the arrangement of Robbie Williams' Angel. Arranger Mark Dreusicke delicately shifts voices and chords at the chorus, creating a lush, dynamic sound that provides a welcome respite from conventional whole note chords that typify college arranging. I couldn't figure out why Angel was his only arrangement.

I was also pleased to hear the Dixie Chicks' Wide Open Spaces, and even more pleased to hear soloist Will Gross' able and tasteful interpretation. Although the Hullabahoos are not the first men's group to cover a song by female artists, this group manages that rare feat of both covering the song accurately while making it their own.

Overall, a respectable album with little to complain about.

First, let me compliment the University of Virginia Hullabahoos for producing a very good CD. There are some excellent cuts here — quality vocalists producing exciting music.

Next, let me chastise them for dragging some really uninteresting songs onto the same CD. Best I can figure it, there are five songs that earned 5s, six that earned 4s and the rest are not as good. I also figure that there are 42 minutes of above average music production and 30 minutes of something not as good. 42 minutes of singing is a lot to keep fresh, energetic, and audience-pleasing. Just think how good those eleven cuts could have been if the 'Hoos had utilized the practice and studio time of the lesser eight to refine the quality of the better eleven.

So what's really nice on this album? You have to start with Walking in Memphis and You Are. Both have superior arrangements through which the arrangers gave the right parts to the vocal percussion and background harmonies. With that foundation, the soloists are able to give the listeners what we really want — good music.

Walking in Memphis opens with intricate rhythms. Soloist Jeremy Pelstring takes this rhythmic lead and strolls the banks of the Mississippi River. Listeners have the sense that they are walking with him up and down the hills of the Blues City musical heritage. His stylings are perfect for this arrangement. This is excellent musicianship by the Hullabahoos.

In the intro for You Are, backup singers set the right mood. Throughout the song, they allow the energy to move higher and lower as the song requires. With this excellent underpinning of arrangement and background, soloist Jamie Gulick lays out a track that allows his musical personality to come forward. The singing is so good that you can visualize both the dance steps of the harmony singers and the gestures of the soloist. When you make music for the ears that makes the eyes see, that's very, very good singing.

Unfortunately, there are some cuts that are not even close to the two above. What makes the really good so good is arrangements that are fully cooked and singers who are sure what is supposed to happen. A lack of those is exactly what makes the bad so bad, and the resulting performance is what makes the listener hit the "skip" button.

These problems, among others, place Sir Elton John's Your Song at the bottom of the list. It opens with an intro that is not exactly on pitch, followed 30 seconds later by bad, ragged chords. The soloist never energizes the lead line. The harmonies never really feel solid behind the soloist. There is even one point where the soloist tries to enter and it sounds like the microphone is not turned on — a production problem. I hope that they didn't spend too much studio time on this one.

Enough about the bad. There are some quality performances on this CD. My suggestion about this CD: buy it. Then use your PC song ripper to pick off the good tracks and create your own copy of the really good stuff. Your final product will only be about 40 minutes long.

The Hullabahoos' album 8ch is, on the whole, a well-produced, enjoyable, easy listening album.

They have striven to reproduce the original songs as accurately as possible, including backing instruments, rhythm and vocal style. There is a nice mix of popular music, and the songs are well chosen in that they translate well into a cappella.

One of the less desirable aspects of this album was the variation in talent of the lead vocalists. Most noticeable on this album was Mike Mewbourne, who sings the lead vocals on Get Outta My Dreams, Get Into My Car and Endless Summer Nights. While he most clearly can sing, he is occasionally inaccurate, and his voice lacks that "ping" which allows it to penetrate clearly and stand out from the background vocals. His voice is also not up to some of the more complex acrobatics which the original artists use, and his attempts to reproduce them fall a little short, particularly in the chorus of Endless Summer Nights. Compared to the tone flow and resonance produced by some of the other lead vocalists, his voice falls short, and so too does the track. I'm sure that this is an excellent blending voice which contributes a lot to the backing vocals, but not as a soloist.

The only other track where the lead vocals were perhaps not as strong as they could be was Easy Lover. The two voices (Dave McCall and Ron Puno) are individually very talented, but not well matched. This song really required two voices with a close match for tone, vowels, etc., which was not quite achieved here.

I had trouble choosing a favorite track from this album. I would have to list several. Crazy, I Want it That Way and Because of You probably stand out the most to me. Overall, the album was very enjoyable and easy to listen to. Some a cappella albums, whilst very cleverly done, become distracting noise if you are not listening to them directly. I found that this album was very pleasant to have playing whilst working at the computer or concentrating on other activities, and also a lot of fun to sing along with!

I personally would choose to buy more of the Hullabahoos' albums if they are all of the standard of 8ch.