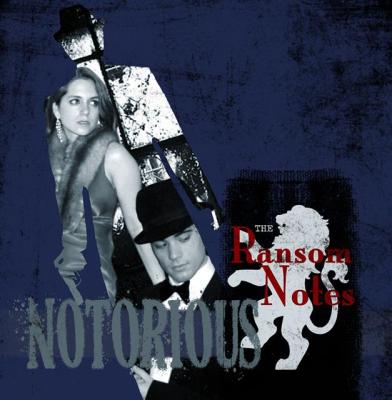 The University of Chicago's Ransom Notes have followed up their previous mediocre release, Settle the Score, with an equally mediocre showing, Notorious, which is marred by virtually all the same problems. This is two in a row, and it's times like this that I'm glad RARB pulls double duty as both a source for public review, and a source for groups to get feedback. Notorious cements for me many of the problems exhibited on Settle the Score. It's time to turn this ship around, and I hope that this review can serve as a jumping off point for the group. To that end, the rest of this review is addressed specifically to the group.

Guys, what are you passionate about? I can't tell from your album. Usually that's one of the surefire saving graces of a collegiate a cappella album. Even if nothing else goes right, there's almost always an audible passion for the music being sung and the fun shared by the group. I don't hear that here. I didn't hear it on your last album either (I said then: "Virtually everything sounds limp and lifeless," and I could say it again now). Your unfocused song selection and bored delivery suggests to me a group without personality. First and foremost, personality is what I want to hear from you.

Start with your arrangements. The most important thing missing is texture. Your approach to everything seems to be big, simple, blocky background harmonies that never change and develop throughout. You need to throw in some counterrhythms and melodies to add interest to your background pads. Moreover, your arrangements need to develop as the song progresses. If you do the exact same thing in the background for two verses in a row, you need to consider shaking things up.

Your other big issue is sometimes putting too many notes in those blocky backgrounds to the point where the chord changes are obscured (Linger and Don't You (Forget About Me) in particular suffer from this problem). Most of the time it needs to be clear to a listener where the changes are — especially if it's a classic like those two are where the person listening knows exactly what to expect, melodically. If nothing I just said makes sense, seek out a reputable arranger for hire, study his or her work, and emulate it in your own.

Once you have the arranging down, for gosh sakes sing like you mean it! Listening to this album, I honestly don't believe anyone cracked a smile at any point during the recording process. Stuff like Love Shack needs to sound fun — playful even! Here it just sounds like a chore. Ditto for Killer Queen. A melodramatic solo doesn't inherently translate as energy — it comes off as goofy.

The best moments on this album are the ones where you are trying to sound pretty. There's no doubt in my mind that you, as a group, understand the basics of making nice sounds together. It shows on Jezebel, where your blend is above average, and your tone more than pleasing. There's just not much going on below the surface of "oh, that sounds nice." I want to hear the intention in your voices, not just the intonation.

In my opinion, it's absolutely essential that the Ransom Notes get a producer for their next project that knows how to put together the vision for an album and coach nuanced performances from the group. There are pretty sounds here, but right now you guys are all head and no heart (and no fun!).

The Ransom Notes of the University of Chicago is, in short, an average group. For every slightly-above average characteristic (pitch, energy), there's a slightly-under average one (blend, soloists) to match. The group at times uses dynamics to good effect and at times has interesting arrangements: The Fairest of the Seasons has a nice rippling effect that gives some momentum to an otherwise slow ballad, while One of the Boys juxtaposes a quickly-moving line with a more melodic one, creating a rich and full (but not chaotic) arrangement.

But one of the group's biggest challenges is its choice of soloists, who are almost universally unsuited to their songs. The soloist on Killer Queen has no trace of Freddie Mercury's playfulness or swagger; the soloist on Linger doesn't seem to have any connection to the emotion in the song's lyrics (and the group's flat dynamics don't help); and The Fairest of the Seasons is pitched too low for the soloist (hearing her scrape the bottom of her range on the word "decide" in the song's final seconds is grating). One notable exception is Jeremy Southgate, who takes the lead on Don't You (Forget About Me). He has an intriguing way of massaging words that makes the song the most memorable on the album.

What makes this album slightly more interesting than average is the group's repertoire. Represented here are songs from every decade of the past 50 years: the 1960s (the Jackson Browne-penned Nico song The Fairest of the Seasons), 1970s (Queen's Killer Queen), 1980s (the B-52s' Love Shack), 1990s (the Cranberries' Linger), and contemporary songs (Katy Perry's One of the Boys). The group covers chart-toppers (Simple Minds' Don't You (Forget About Me)) and indie musicians (Iron & Wine's Jezebel).

This breadth certainly does provide some interest — I'd rather hear an average group tackle unusual songs than re-tread the same old overdone tunes. But it also makes the group seem scattered and unfocused. The problem here isn't about recognizability; it's about sound and style. The Ransom Notes' era-jumping would be understandable (and likely commendable) if they had chosen songs that truly suited each of their soloists. Instead, though, the group has fallen into the same old "average performance of songs we like" trap. That certainly makes Notorious more listenable than an average album of overdone Coldplay/Sara Bareilles/Owl City tunes, but not by much.

To call Notorious an eclectic album may be an understatement. With a repertoire spanning Katy Perry, Iron & Wine, the B-52s, and Nico, the album feels disjointed and unfocused. There's some nice work done on individual pieces, but they don't form a cohesive whole.

Much of the album consists of lukewarm pop covers, ranging from the overly restrained Love Shack to the nice but forgettable One Kiss Don't Make a Summer. There's an occasional interesting touch like the nice integration of whistling into Send Me On My Way, but the bulk of these tracks are average or slightly substandard in arranging, production, and energy.

The low point is Bittersweet Polyphony, a medley that I wanted to like much more than I did. For some reason, the Ransom Notes decided to blend Bittersweet Symphony with Jump Around, Paper Planes, Ride Wit Me, and Disturbia. The transitions feel forced and botched, and with sudden shifts in tempo and performance style mid-groove, the whole track feels overstuffed. Ride Wit Me is all-around embarassing, feeling significantly underproduced and underperformed. It's a shame that the nice work on Bittersweet Symphony and Paper Planes (which actually fit together in an interesting manner) are dragged down by the rest of the medley.

The two tracks that point toward a possible future for the group are the two non-pop songs. Emily Graber's arrangement of Jezebel approaches the Iron & Wine song with a choral texture almost reminiscent of Scarborough Fair. The end result reminds me of the RPI Rusty Pipes' version of For the Widows In Paradise, For the Fatherless In Ypsilanti on Cantavimus, though the Ransom Notes' song is neither as textured nor as kinetic. Both Jezebel and The Fairest of the Seasons (a Nico cover from the '60s) take advantage of the more lyric quality of some of the voices at the group's disposal. Allowing that more traditional quality, particularly in Kim Bullock's solo on Seasons, highlights the folk elements of the songs and works better than trying to force those textures into a pop mold. Neither song has an especially complex arrangement, but both of them have a different sound from most of the collegiate a cappella out there. If the Ransom Notes were to embrace these differences, particularly with more care in the production, they could carve out a niche. Unfortunately, given that these are just two of the ten tracks on Notorious, I'm afraid they may prefer the pop route.